Afghanistan Army Veteran to be deported to Mexico

A U.S. Army veteran will face deportation as soon as this week after losing an appeal over drug conviction from 2008.

Miguel Perez Jr, 39, who moved to the United States from Mexico when he was just eight, holds a green card and has completed two tours of duty in Afghanistan.

But the Army Private First Class veteran, based in Chicago, has been fighting deportation for nearly five years after mistakenly thinking his military career and oath of service made him a U.S. citizen.

His family and his two U.S. citizen children are ‘distraught’ after Monday’s federal court denied his appeal.

Fearful: Miguel Perez Jr, 39, a Afghanistan army veteran faces deportation to Mexico, despite moving to the U.S. at the age of 8 and serving in two tours of duty

Courts learned about his citizenship status after a drug conviction in 2008 where Perez was caught delivering less than 100 grams of cocaine hidden in a laptop case to an undercover officer, according to the Chicago Tribune.

He pleaded guilty to the drug charge and served half of a 15-year prison sentence.

After serving time, Perez said he discovered he wasn’t a citizen when he was summoned to immigration court in September 2016 before being released from prison in Galesburg, Illinois.

After his release instead of returning home to Chicago, he was taken to a Wisconsin detention center for immigrants awaiting deportation.

His family say that Perez suffered post-traumatic stress disorder and suffered a brain injury while in Afghanistan, making it hard for him to hold a job, and turn to drug selling as an alternative, according to WGNTV.

Perez sought treatment for his PTSD and was undergoing testing for his brain injury at the Veterans Affairs hospital in Maywood, Illinois.

During this time he reconnected with a childhood friend who provided him with free drugs and alcohol, which culminated in Perez being caught delivering drugs by an undercover officer.

Prosecutors in the case also pointed out that Perez was given a general discharge from the military after a drug infraction. 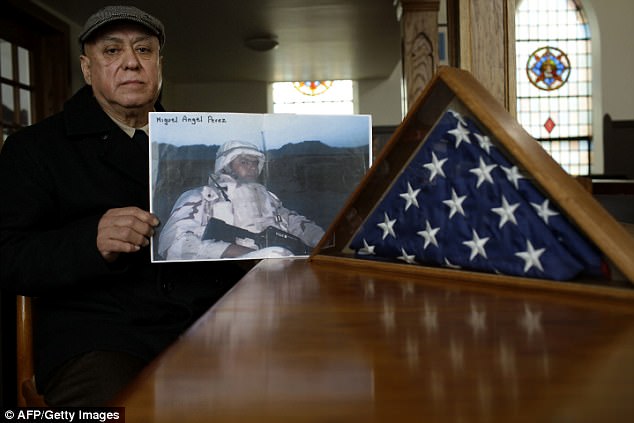 Broken family: His family, including a daughter, 18, and son, 12, remain ‘distraught’ over Perez’ lost appeal on Monday that will see him deported soon

Yesterday, the 7th U.S. Circuit Court of Appeals in Chicago rejected the argument that Miguel Perez Jr’s life would be in danger if he were deported to Mexico.

In court Perez shared his fear of life in the country he hasn’t lived in since childhood.

‘It’s not what I think would happen to me. It’s what I know,’ he said.

‘It’s not like I can … fit in and blend in. It just doesn’t work that way. How long can I hide the fact I’ve been deported and I was in the military?’ he added.

He likened his deportation to a life sentence.

‘This is the same as somebody fighting a life sentence. The outcome of this determines the rest of my life spent away from my society, my way of life, my loved ones and not to mention, my country. … This is my country regardless of what happens here,’ he said to the judge.

The ruling left his friends and family ‘distraught’ as well as his two children, a daughter, 18, and a son, 12, who are both U.S. citizens.

In a statement the family said: ‘From the beginning, Miguel has fought his deportation, not only for himself, but in solidarity with other green card veterans who have been or who are now facing deportation after having served their country in combat.’

His attorney Chris Bergin said the case reveals the hypocrisy in how the nation treats American veterans.

‘If you’re going to put your hand on your hearts every time at a game, you’re going to say thank you for your service and wear American flag lapel pins and you’re going to criticize football players for taking a knee during the national anthem, it seems that’s all superficial and false patriotism if you’re not caring about an actual military veteran,’ he said.

Perez is being held in a Wisconsin detention center where he awaits deportation.