First the verve, then the swerve. And finally the loss of nerve.

Back in April, on their last visit to London, Ajax’s fearless young side outgunned Tottenham with a slick display of attacking football.

They left with only a 1-0 win, but went out on away goals after losing their home leg. That first display of craft and class embodied an incredible run to the last four of the Champions League that sent shockwaves around Europe. Not many teams leave Spurs chasing shadows.

On Tuesday night Chelsea were left looking over their shoulders, too. At Stamford Bridge, though, it was another weapon in the Ajax armoury that shocked Frank Lampard’s side. At the end of a frantic first half, the visitors led 3-1 and every goal had the same vital ingredient: brilliant delivery from wide.

First, after only 107 seconds, a whipped free-kick by Quincy Promes was deflected home by Tammy Abraham. Then Promes turned scorer, nodding in Hakim Ziyech’s pinpoint cross.

By half-time, the visitors had breathing space thanks to an own goal from Chelsea goalkeeper Kepa, who was powerless to stop another devilish free-kick from Ziyech curling right over his head, coming back off the post and in off his face. After the break, their fourth, courtesy of Donny van de Beek, came after they flooded forward on the break with typically ruthless abandon.

But if last season’s win at Spurs showed the best of this young side, the return leg showed they are ripe for implosion. And so it proved again last night. 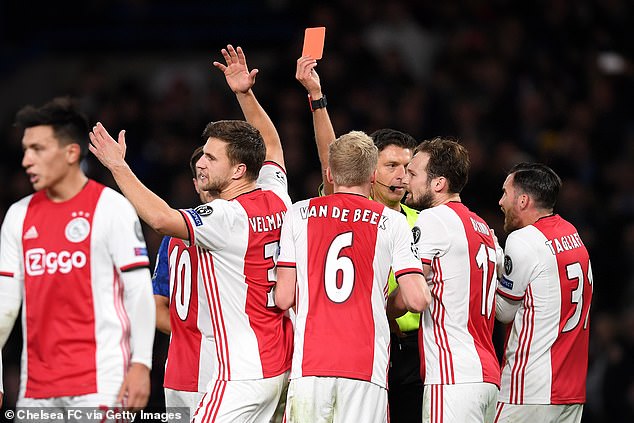 Ajax’s refusal to stop pushing forward will always present the opposition with chances. No selection or tactical tweak can legislate for the minute of madness they endured here, though, when they went from 11 players to nine following the quickfire dismissal of centre back partnership Daley Blind and Joel Veltman.

Some flaws aren’t easily ironed out.

Before Chelsea’s 1-0 win in Amsterdam, Ajax boss Erik ten Hag insisted ‘last year was last year’, and that Ajax must forget their run to the semi-final that was ended so cruelly by Tottenham.

Many of the scars from that defeat appeared to have healed. Eight of the team that started last night were in the XI that won on their previous visit to England, with seven survivors from the fateful return leg in Amsterdam.

Matthijs de Ligt and Frenkie de Jong, the young spine of that side, were sold but the same fearless football remains and new leaders have emerged. Van de Beek now shoulders more of the burden in midfield, while Dusan Tadic has led from the front since taking the armband, with nine goals and 12 assists this season.

He was kept quiet for long periods last night. But Ajax have more than one way to hurt you. They also haven’t lost their ability to self-destruct, either.