Alesha Dixon has been left devastated after her younger brother was involved in a horrific car crash that killed his friend.

The Britain’s Got Talent judge’s 30-year-old sibling John Lonergan was a passenger in James Bartell’s Ford Ka when it smashed into trees in Welwyn, Hertfordshire.

Alesha, 38, is now said to be ‘sick with worry’ for her brother, who is badly hurt but in a stable condition in hospital.

Devastated: Alesha Dixon is said to have been strongly affected by her brother’s involvement in a crash that left his friend dead. Pictured from right: Alesha, Azuka Ononye and her brother John

A source close to Alesha told The Sun John is ‘lucky to be alive’, adding: ‘He has several broken ribs and a broken collar bone.’

Alesha’s brother is also said to be ‘devastated’ about the death of his good friend.

Delivery man James, who was 29, had a young son and daughter with 32-year-old girlfriend Anna-Marie Kelly.

Police said they were investigating the cause of the crash, which occurred at about 5pm on Sunday.

A friend of the Dixon family said it was ‘puzzling’ how the car crashed because it was on an ‘open road’.

Alesha and John are said to be very close, having grown up in difficult circumstances in Hertfordshire.

John was arrested eight years ago for possession of cocaine and cannabis.

Delivery man James (left), who was 29, had a young son and daughter with 32-year-old girlfriend Anna-Marie Kelly. Right: Alesha Dixon

It was reported then that Alesha was distressed by his trouble with the law and over fears it would ‘taint’ the family. 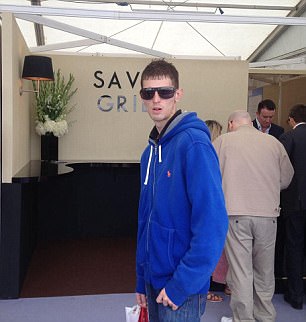 Alesha and John (pictured) are said to be very close, having grown up in difficult circumstances in Hertfordshire

In 2007, she took part in the fifth series of Strictly Come Dancing – despite worrying it might tank her career.

In the end, she and professional dancer Matthew Cutler won the show with 4.5 million votes in the final.

She was briefly a judge on the show before joining the panel on Britain’s Got Talent in 2012.

PC Jackie Lister, who is investigating the tragedy, said police are keen for any witnesses to come forward.

She added: ‘I am conscious that many drivers these days have dash cams fitted to their vehicles and may have captured the vehicle being driven immediately prior to the collision. If anyone has footage, this may prove useful to the investigation.

‘Please contact me on Hertfordshire Constabulary’s non-emergency number 101 so that I can review it.’