Less than a day after being left seriously injured while filming a segment for Today, Allison Langdon was pushed through Gold Coast Airport in a wheelchair.

The 41-year-old TV host returned home to Sydney on Friday, after badly injuring her leg during a stunt gone wrong while filming in Burleigh Heads on Thursday.

Allison was wheeled through the airport by airline staff, with her injured right leg extended in front of her in a leg brace.

Less than a day after she was left seriously injured while filming a segment for Today, Allison Langdon was pushed through Gold Coast Airport in a wheelchair

She clutched a pair of crutches in one hand, while supporting her hurt leg with her other hand.

A pillow rested underneath her knee, and she wore a white compression sock on her left leg, frequently given to patients after surgery.

Meanwhile, a hospital band was visible on her left wrist after she was rushed to emergency following the accident. 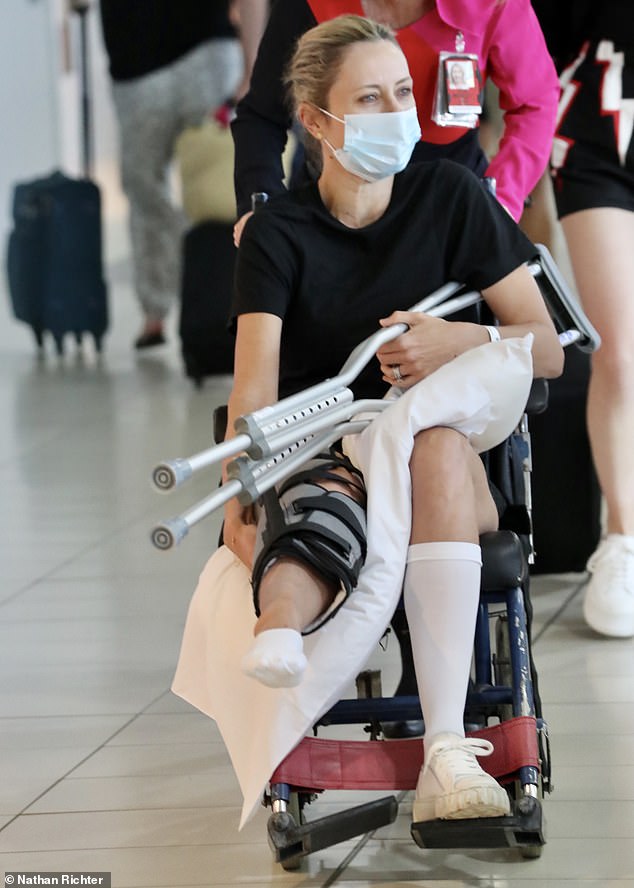 The 41-year-old TV host returned home to Sydney on Friday, after badly injuring her leg during a stunt gone wrong while filming in Burleigh Heads

Her blonde hair was tied up in a bun at the back of her head and she appeared fresh-faced underneath a blue face mask.

A young woman trailed behind her with two suitcases in tow, with the group attracting the attention of fellow travellers.

After being wheeled outside onto the tarmac, Allison was then pushed up a ramp and onto her flight. 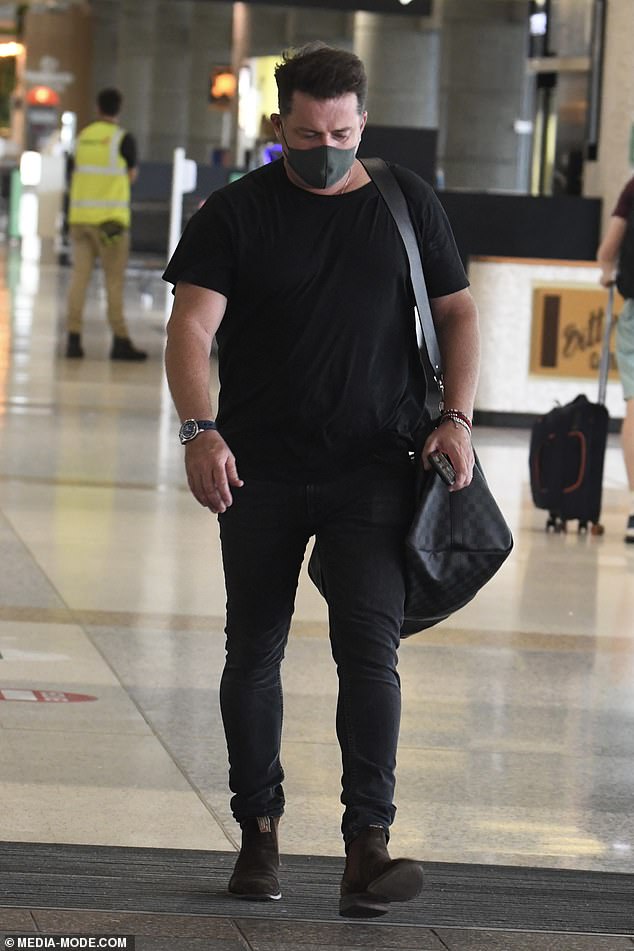 Meanwhile, a serious Karl Stefanovic was also spotted returning to Sydney on Friday, following the accident

The TV star appeared to be in high spirits despite her injury, smiling and conversing with the airport staff.

Allison had been filming alongside co-host Karl Stefanovic when she badly injured her leg and needed to be taken to hospital.

Meanwhile, a serious-looking Karl, 46, was also spotted returning to Sydney on Friday following the accident.

Walking through Sydney Airport, he appeared unusually sombre after disembarking from his flight.

He was dressed casually in a pair of black skinny leg jeans and a plain black T-shirt, which he paired with brown Chelsea boots.

The veteran TV host wore a khaki green face mask and carried a designer travel bag on one of his shoulders.

Karl appeared deep in thought as he made his way through the airport terminal after his colleague’s accident.

Allison was injured while hydrofoiling during a pre-recorded segment for the breakfast program on Queensland’s Gold Coast.

Explaining his colleague’s absence from the Today show on Friday, Karl confirmed Allison had been rushed to hospital after the accident.

‘She had a bit of an accident yesterday… she hurt herself really badly. She’s in hospital this morning,’ he said on Today.

As Karl updated viewers, dramatic footage was shown on screen of Ally being pulled from the water after her accident.

The reporter was put on her back while wearing a life vest and helmet and dragged back to a wharf by two male rescuers.

She then sat up by the water and composed herself as Karl helped her take off her helmet.

Channel Nine personality Leila McKinnon was called in at the last minute to fill in for Allison on Friday’s show.

Leila, 48, told Karl that Allison had messaged her and seemed to be doing okay.

‘She messaged me this morning at 3am asking how I liked the alarm, so she still has the same great spirit, but yeah, doing it a bit tough. But she is a tough one,’ she said.

Karl noted: ‘We love you, Ally. We know you will be watching this morning or sleeping in.’

In a statement to Daily Mail Australia on Friday, Channel Nine described the incident as ‘an unfortunate accident’.

‘After nearly an hour of incident free filming of a segment about hydrofoiling, Ally fell awkwardly as she headed back to the marina at the end of the shoot,’ they said.

‘It was an unfortunate accident, and she was immediately taken to hospital.

‘Both Karl and Ally had looked forward to the experience, and both had a wonderful time.

‘They had a comprehensive safety induction, and a thorough run-through of all aspects of hydrofoiling.

‘As with every shoot, safety requirements, briefings and subsequent after-care, are strictly followed and prioritised.’

Earlier on Friday a Nine spokesperson confirmed Allison would be returning to Sydney after being hospitalised in Queensland.

‘Ally hurt her leg after landing awkwardly during filming for a story yesterday and was sent to hospital,’ they said.

‘She is expected to return home to Sydney over the weekend. We wish her well and a speedy recovery.’

They added: ‘We thank Leila McKinnon for taking a late-night call to join Karl for the Today OB at Burleigh Heads.’

The foil is attached to the bottom of a surfboard and features a wing-like design that helps lift the rider above the water.

Balance is key on the board, and riders have to place more of their weight on their back leg.