Leah Washington, who was 17 at the time, suffered a partial leg amputation in the weeks after the crash in 2015

Alton Towers has risked a public backlash by asking for a tax cut because the horrific Smiler rollercoaster crash hit the firm’s takings.

The theme park’s owners blamed a slump in trade on the catastrophe three years ago which left several passengers with life-changing injuries.

It urged the Government to review its £4 million business rates bill – the annual tax it pays on the park – because visitors had been put off thrill rides. But a tribunal in London revealed two weeks ago it had dismissed the request.

Leah Washington, then 17, and Vicky Balch, 20, suffered partial leg amputations in the weeks after the rollercoaster crash. Three others suffered serious injuries, including Miss Washington’s boyfriend Joe Pugh, 18, who broke both kneecaps and had the little finger of his left hand snapped off.

The collision in June 2015 had the same impact as a car crashing at 90mph, a court was told. A judge said the park’s parent company, Merlin Entertainments, was guilty of a ‘catastrophic failure’, adding that it was ‘a needless and avoidable accident in which those who were injured were lucky not to be killed’.

Merlin – which admitted breaching the Health and Safety Act – was fined £5 million. The crash occurred after an engineer restarted the ride while a stationary carriage was still on the track.

Merlin chief Nick Varney said after the court hearing in 2016 that the firm had ‘let people down with devastating consequences.’ At a tribunal in London to hear the case for a tax cut, Merlin said its annual business rates payments should be cut because the public had been put off rollercoasters.

The tribunal was told ‘the attitude of members of the public to thrill rides in general, and to thrill rides at Alton Towers in particular’, had changed following the crash.

Merlin argued the switch in attitudes constituted a ‘material change’ for its business and one which had continued to impact on trade. The company’s business rates bill increased by about £1 million last year after a nationwide recalculation. 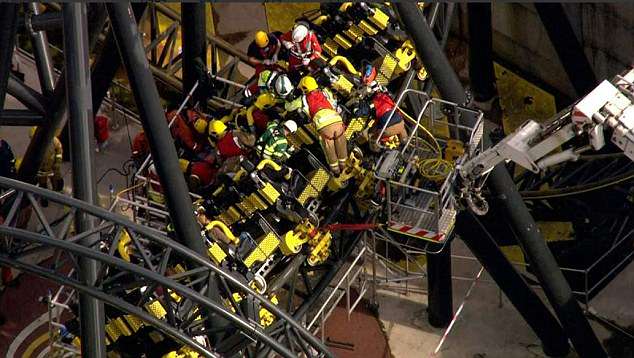 But its request for a review of payments was dismissed by the tribunal, which said in its judgment: ‘There is no doubt that attendances did reduce following the incident.

‘However, what was not known is how much of that was down to a change in attitude of members of the public to thrill rides, the weather, better alternatives, pricing policy, the possible lack of new appealing rides or a lack of confidence in the site owners (as opposed to the park or thrill rides).’

Merlin said its bill had last been assessed two months before the crash. It added: ‘Under advisement following a decline in trading, we requested these rates be reassessed.’