AMANDA PLATELL: Shamima Begum was brainwashed as a child and should now be brought back to Britain

No one was more horrified than me on learning five years ago that a 15-year-old born and raised just a few miles from my London home, a ‘talented and dynamic’ student, had fled to Syria to become a jihadi bride.

Nor to discover that having married an Isis terrorist, and upon turning up in a refugee camp as her ‘caliphate’ collapsed around her, Shamima Begum coldly declared: ‘When I saw my first severed head, it didn’t faze me at all.’

This lass, from Bethnal Green, had three children with her Dutch-born husband, all of whom died within months of their birth.

Shamima Begum (pictured) was a child when she was radicalised. Surely we should be hunting down the monsters with a twisted view of Islam who prey on vulnerable kids? What she did was unconscionable. But she was 15

Now she wants to come ‘home’, and appeal court judges have ruled she can return to the UK to challenge the Home Office decision to strip her of her British citizenship.

Our instinctive reaction may be that as Begum made her bed with a terrorist, let her lie — and even die — in it. And yet, as a teenager, she was radicalised here. We cannot turn a blind eye to the hatred of a tiny minority of extremists who foster evil in the hearts of children.

I believe she should be brought back to face justice. I hope she is arrested on arrival and, if convicted, serves many years in prison, although it should be remembered she was a minor when she fled our shores.

The argument that her return will open the floodgates to hundreds of other British jihadis returning is fatuous. More than 400 male and female Isis supporters have already returned, and we hear nothing of them.

Yet we will be watching Begum’s every step. I wonder, sometimes, if callous and cruel women are judged more harshly than men.

If we are anything, we are a nation guided by Christian beliefs — of forgiveness, of redemption, of second chances, of fair justice.

We are not vengeful, though we need, of course, to be vigilant about threats to our security and the safety of our citizens: other teenagers were blown to bits in the Manchester Arena bombing, after all.

Begum was a child when she was radicalised. Surely we should be hunting down the monsters with a twisted view of Islam who prey on vulnerable kids? What she did was unconscionable. But she was 15.

That said, if I did happen to run into her in our local Tesco’s tenderly squeezing an avocado, I’d sure as hell be praying she wasn’t wearing a backpack.

Is it too much to hope that as we see him painting the Mona Lisa, Aidan might find the sweltering Mediterranean heat too much, and just have to take his shirt off?

Time to get a job, Brooklyn 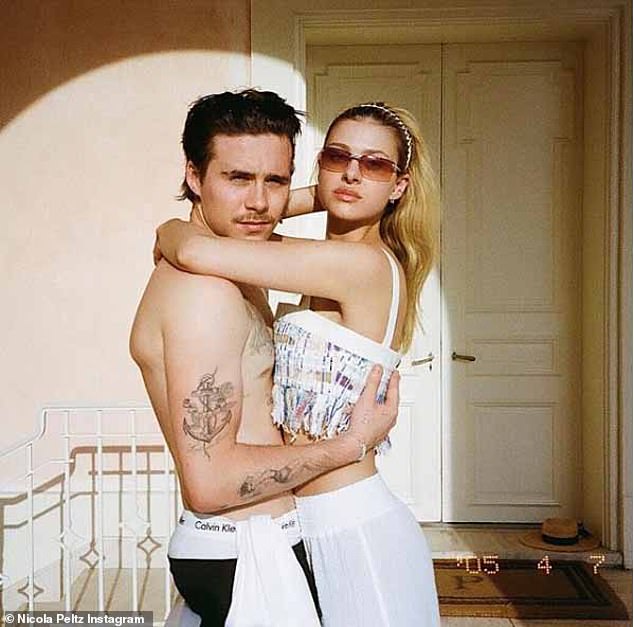 Proud parents Victoria and David Beckham are delighted son Brooklyn, 21, is engaged to the Nicola Peltz, 25, heiress to a billion-dollar investment fortune.

He calls her his soulmate, which is perhaps a bit hasty given they only started dating last October.

Neither Brooks nor Nics appears to have held down a proper job, which must give their parents cause for concern. David and Victoria worked damned hard for their fortunes, she as a Spice Girl, he as a footballer.

Let’s hope Brooklyn and Nicola don’t turn out to be just a pair of sloths.

Speaking by video from her borrowed £12 million LA mansion as part of a global ‘Girls Up’ leadership summit, the Duchess of Sussex quoted the Dalai Lama and implored young women to bring about gender and race equality.

‘Believe in yourselves!’ she trilled. ‘Don’t be afraid to do what you know is right, even if it is unpopular, even if it scares people. Often, it is fear that paralyses us.’

Yes, Megs — and back in Blighty, after hearing that load of tosh from a privileged, pampered princess, we are paralysed.

How J-Lo can you go? 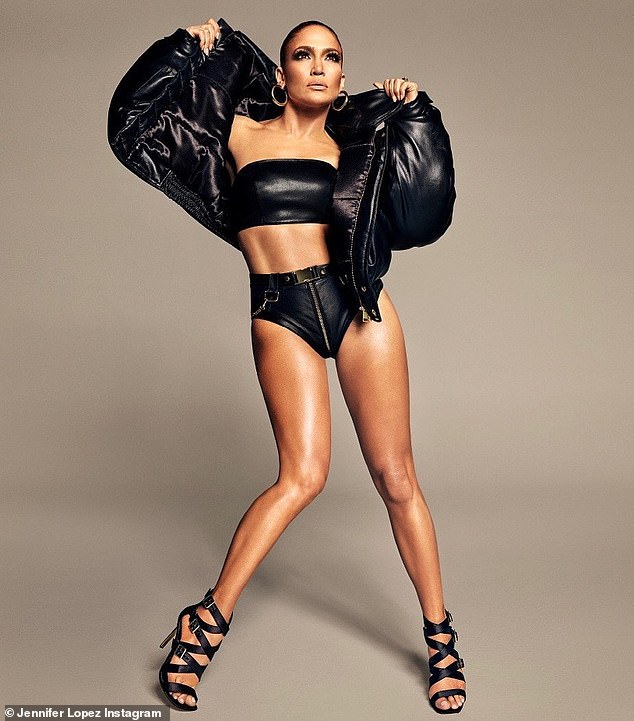 With the greatest respect, J.Lo, no woman of 50 possesses such perfect pins after two children and three husbands.

Jamie Oliver’s wife Jools is desperately trying for her sixth child and had her fifth miscarriage during lockdown.

Jools, 45, describes her lost babies as ‘little stars in the sky’.

Tragic as this is, perhaps it’s time to think about her stars here on earth — her devoted husband, her five healthy children — not to mention fabulous wealth.

That’s more than most women could dream of.

We are now either on Team Johnny or Team Amber in the bitter court case over alleged domestic abuse and wife — or husband — beating.

It’s all murky but most striking is that two of Depp’s exes believe he is a kind and gentle man who would never raise a hand to any woman.

I guess we’ll just have to wait for Ms Heard’s exes to say what a sweet gal she is.

But if she loses the court case, the classic line from Pirates Of The Caribbean will haunt her: ‘This is the day you will always remember as the day you almost caught Captain Jack Sparrow.’

Despairing news for us England Test cricket fans: fast bowler Jofra Archer has been caught at fine leg, slipping out of his ‘bio-secure bubble’ on a 130-mile detour to visit — he claims — not his exceptionally hot girlfriend, but his pet pooch. 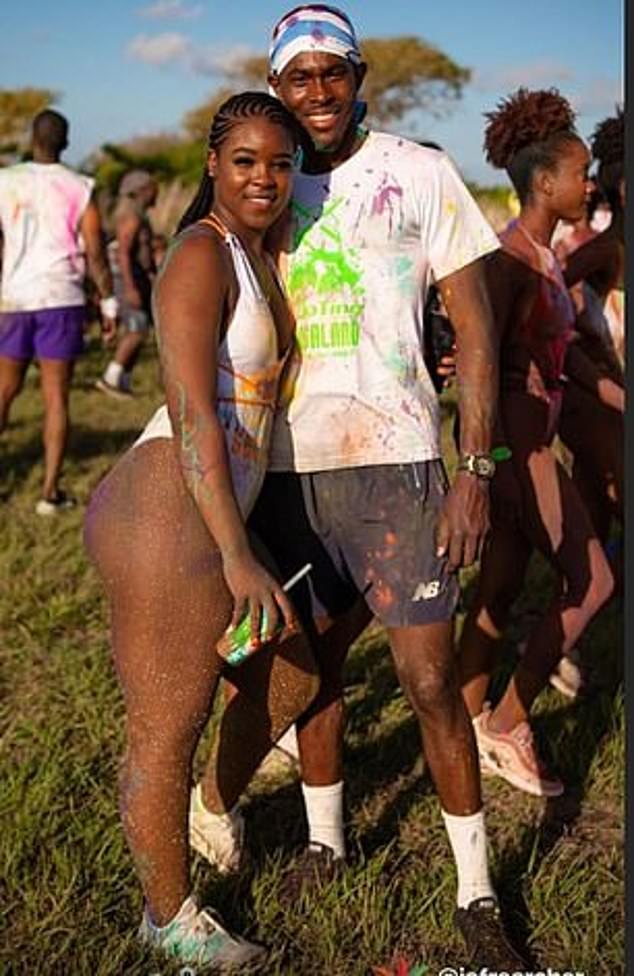 Jofra Archer (pictured right) said he broke the England cricket team’s ‘bio-secure bubble’ ahead of their match against the West Indies to visit his dog, and not his girlfriend (left)

That’s a shaggy-dog story if ever I heard one.

Denied bail and now facing a year in a grim Brooklyn jail as she awaits trial, Ghislaine Maxwell, we learned this week, went by the alias ‘Jennifer Ellmax’ when she bought a £2 million Massachusetts beachfront mansion in 2016 while trying to dodge police.

She also registered her phone under the name ‘G-Max’. Yeech.

How creepy that the woman accused of being Jeffrey Epstein’s procurer of underage girls for sex (which she denies) couldn’t let go of the Maxwell name, disgraced by her crooked dad.

The nation’s much-loved and hunky weatherman Tomasz Schafernaker refuses to shear off his Covid curls.

If only other men realised they looked so much better with gorgeous wavy lockdown locks: Tomasz’s moptop is hotter than a sizzling summer’s day.

The dour Swedish teenager Greta Thunberg demands that damaging nature be made a criminal offence, which she calls ‘ecocide’.

Jolly good, dear, but with a pandemic that has already killed hundreds of thousands of people, forgive us right now for focusing on saving human beings.