Amazon employees staged Black Friday protests due to ‘inhumane’ working conditions, despite the company having hired an extra 20,000 staff for one of the biggest shopping events of the year.

Workers from across Europe in places such as Italy Spain and Germany were protesting against the online retailer. While workers across the UK also showed up to demand change.

They had been protesting the conditions in the lead up to Black Friday, however, the firm’s regional operations director for the UK Jonatan Gal, said on Friday that the company spends all year preparing for the event and had in fact hired a mammoth 20,000 seasonal workers globally in order to keep up with demand.

There were more workers than police at the San Fernando de Henares depot near Madrid, Spain, after workers protested at working conditions 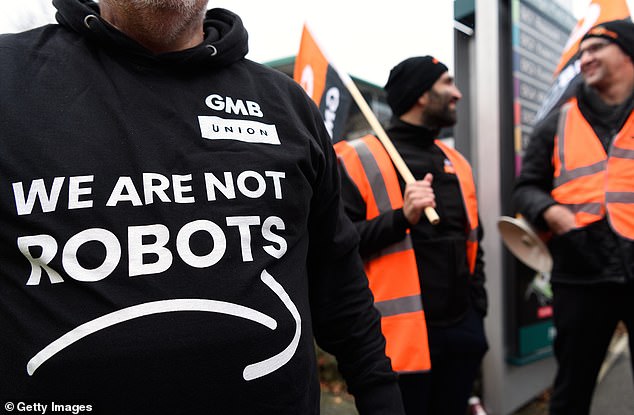 Staff at the firms’s Milton Keynes warehouse in the UK wore T-shirts that read: ‘We are not robots’ 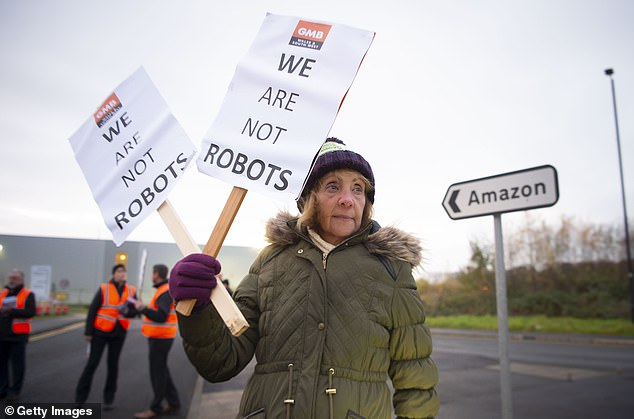 A handful of protesters gathered at the depot in Swansea, Wales, as they protested ‘in-humane’ conditions

Amazon also said that most staff members across Europe had turned up to work, despite the mass walk outs.

Protests across the UK seemed to be sparse in attendance while it was reported that close to 90 percent of the workers at Spain’s largest warehouse near Madrid had turned out, with some 1,600 having pledged to continue to strike on Saturday.

Only two people were at the loading bay, spokesman Douglas Harper said.

However, he also admitted that Amazon had diverted cargo deliveries to its other 22 depots in the country. 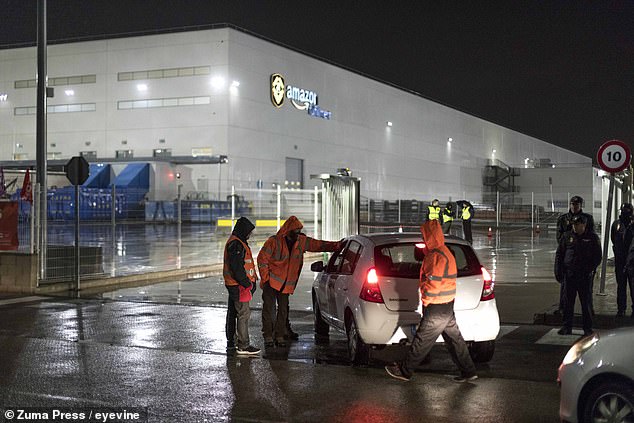 Fiorenzo Molinari, the local FILCAMS CGIL secretary in Piacenza, added: ‘Amazon has not made worker safety a top priority.

‘To us, it seems like the company only pretends to care. Our warnings about unsafe conditions often go ignored, and our concerns about our jobs get deflected.’

The company’s request was denied, as labour relations does not fall within the police’s purview and Spanish legislation protects the right to strike.

When asked about the reasons why he is striking, Spanish Amazon worker Kevin Douglas said: ‘I’ve been working long hours, getting home late, tired, and under a lot of stress. We do morning shifts, then evening and night shifts.

‘Now we have to work six days in a row, but the company now wants to make that seven. At least some of us used to have one day off a week. 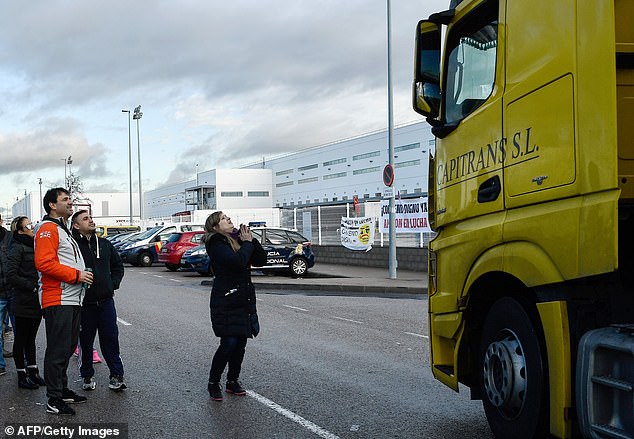 ‘Most of my friends and family work from Monday to Friday, so I never get to spend time with them.’

This is while around 620 workers also walked out at German distribution centers in Bad Hersfeld and Rheinberg.

One German Amazon worker Andreja Schmidtkunz said: ‘I’ve seen too many people starting healthy and now having their second or third surgery already. 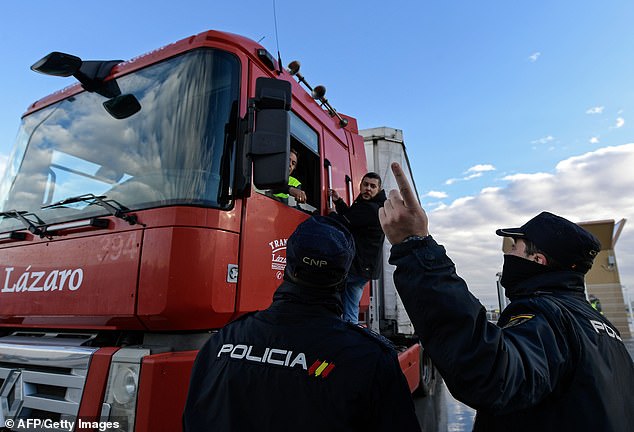 ‘You start at the company healthy and leave it as a broken human.’

But, in a similar vain to their UK counterparts, Amazon reported that most staff had continued to work and that customer service had not been affected by the strikes.

The 24-hour strike in Germany was organised by the Ver.do services union which has been demanding better pay, as well as healthy working conditions. 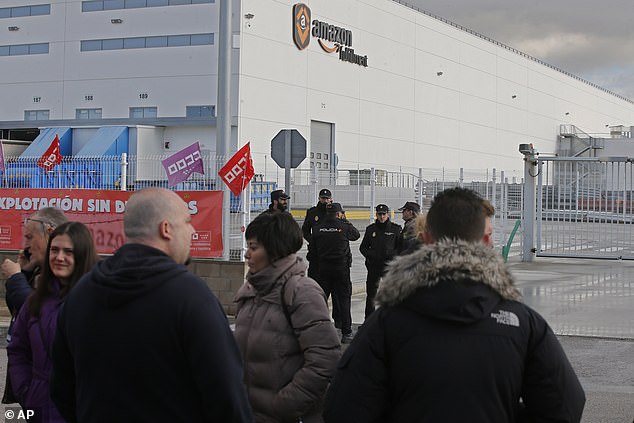 Speaking to Reuters union representative Mechthild Middeke said: ‘We are entering the end of year spurt, the most stressful time for employees.

‘Especially on a day like Black Friday, employees should be the central focus.’

The union has previously stated that Amazon workers receive lower wages than others in similar retail and mail-order jobs in the country. German staff working at Amazon start on an hourly rate of €10.78 (£9.54), a salary that Amazon has said is a good rate for the sector.

In the UK Workers’ union GMB organised protests at Amazon’s warehouses in Rugeley, Swansea, Peterborough, Milton Keynes and Warrington on Friday. However pictures that have emerged from the protests show a poor show from employees, despite their outrage at working conditions.

Despite this, the union estimated there were hundreds of protesters in attendance at the events across the country including current and former Amazon employees.

Workers at the protests in the UK argued that:  ‘Next-day delivery should not mean a lifetime of pain for Amazon workers.’ 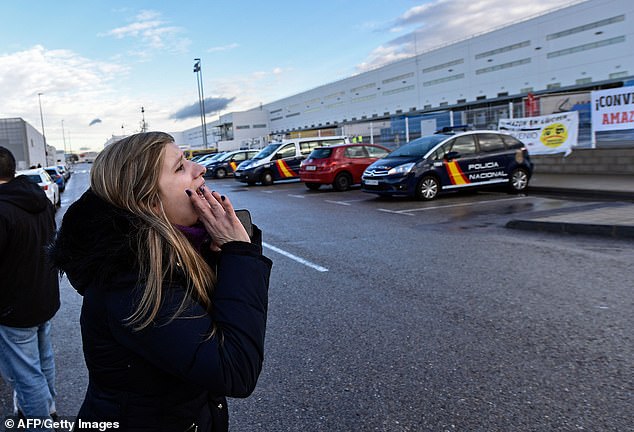 This is while GMB general secretary Tim Roache said: ‘We’re standing up and saying enough is enough.

‘You’d think making the workplace safer so people aren’t carted out of the warehouse in an ambulance is in everyone’s interest, but Amazon seemingly have no will to get round the table with us.

‘Working people and the communities Amazon operates in deserve better than this. That’s what we’re campaigning for.’ 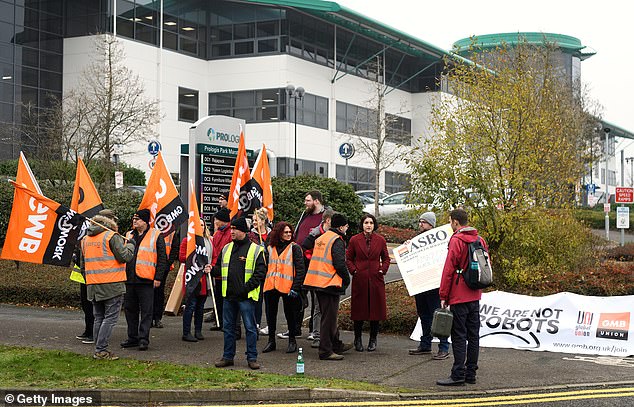 Christy Hoffman, General Secretary of UNI Global Union added: ‘Amazon’s refusal to negotiate with unions is not only a violation of workers’ rights, it is dangerous.

‘By not addressing workers concerns, hazards remain, and the injuries continue.

‘Next-day delivery should not mean a lifetime of pain for Amazon workers.’ 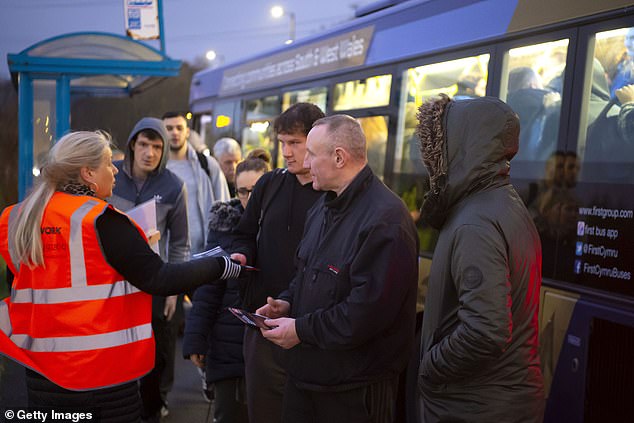 One Amazon UK worker said: ‘I have repetitive strain, and spondylosis with arthritis.

‘The work is dehumanising, you are a number not a person.

‘If you have health issues, the Amazon way is to pay you off and replace you with temporary workers with less terms and conditions.’

Staff at Amazon have been busy picking and packing in their warehouses as they fulfil millions of Black Friday deals.

Workers at the Hemel Hempstead fulfilment centre in Hertfordshire have been working round the clock to send out bargains, snapped up by Brits in Amazon’s 10 days of Black Friday deals, which ends on Sunday.

Amazon has been offering more deals than ever before on thousands of Christmas must-haves. 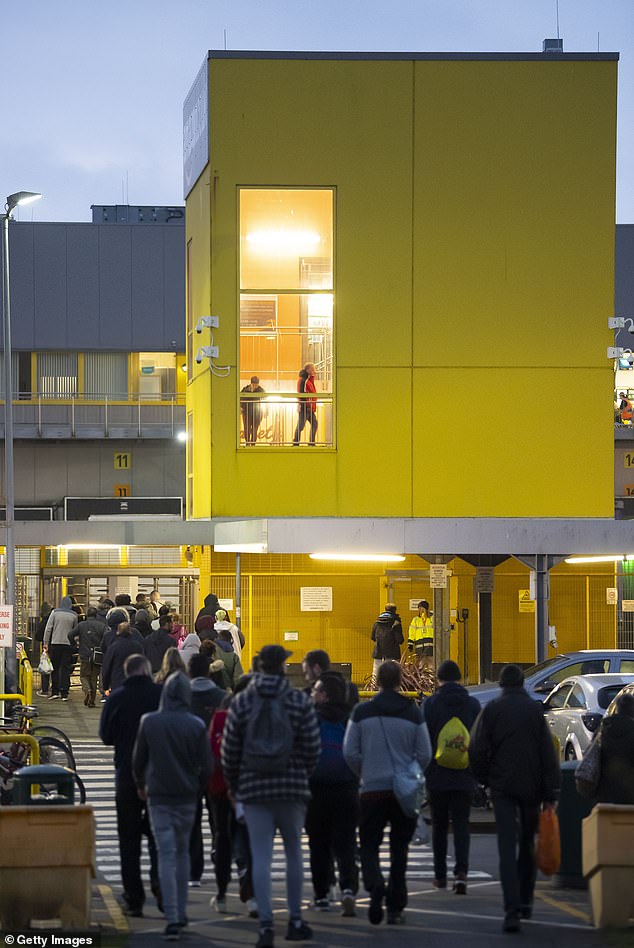 Workers arrive as GMB, the union for Amazon workers, stages a protest over what it claims are ‘inhuman conditions’ in Wales

The website has had new Deals of the Day every day, offering lower rates on Amazon devices, electronics, toys, fashion, sports and beauty.

There have also been thousands of ‘Lightning Deals’ – products available at a discount, in limited quantities, for a short period of time – with new deals becoming available as often as every five minutes. 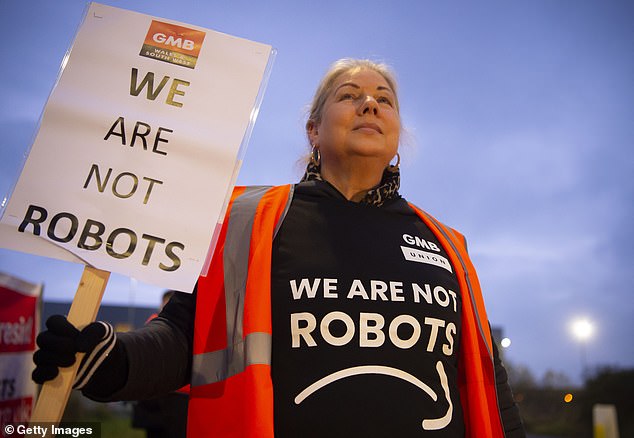 Amazon said in a statement: ‘Amazon has created in the UK more than 25,000 good jobs with a minimum of £9.50 an hour and in the London area, £10.50 an hour on top of industry-leading benefits and skills training opportunities.

‘All of our sites are safe places to work and reports to the contrary are simply wrong. According to the UK Government’s Health and Safety Executive, Amazon has over 40% fewer injuries on average than other transportation and warehousing companies in the UK.

‘We encourage everyone to compare our pay, benefits and working conditions to others and come see for yourself on one of the public tours we offer every day at our centres across the UK.’ 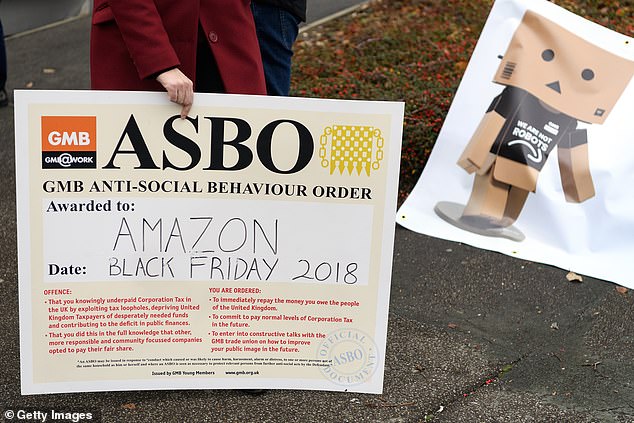 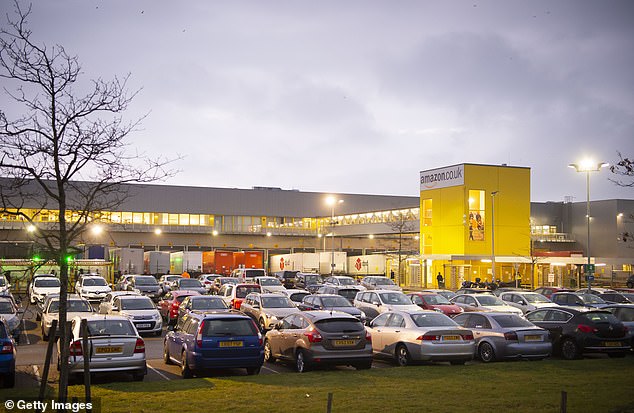 Christy Hoffman, General Secretary of UNI Global Union said: ‘Amazon’s refusal to negotiate with unions is not only a violation of workers’ rights, it is dangerous.’ Pictured , the Swansea warehouse