America’s Got Talent: Ansley Burns advances to semis after Simon Cowell brings her back as wildcard

Teenage singer Ansley Burns after being saved yet again advanced Wednesday to the semifinals of America’s Got Talent.

The 13-year-old singer after being eliminated during the judge cuts round was brought back by judge Simon Cowell, 59, as a wildcard to perform live at the quarterfinals at Hollywood’s Dolby Theatre.

Wildcard winner: Ansley Burns returned as a wildcard after being eliminated earlier and advanced Wednesday to the semifinals of America’s Got Talent

Viewers during the Dunkin’ Save live vote Tuesday favored Ansley and she advanced to the semis along with six other acts.

‘I can’t express how I’m feeling. I never thought I would be here and be able to come back,’ Ansley told host Terry Crews, 51.

Simon was the first to congratulate her.

‘Ansley, you are unstoppable aren’t you? You didn’t get through, the public got you back,’ Simon told her. 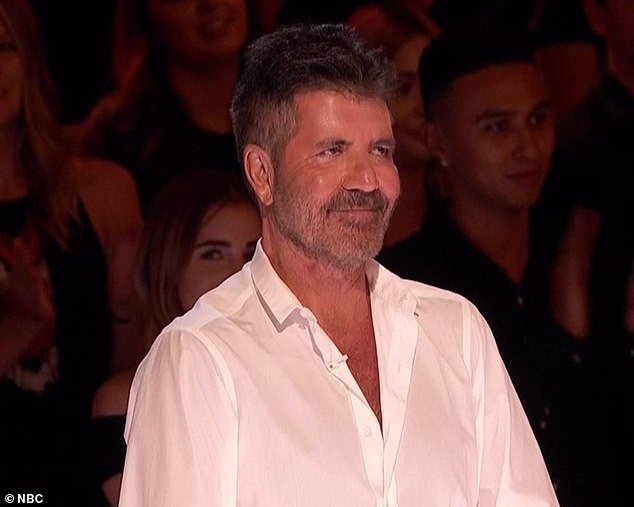 Wildcard pick: Simon Cowell picked Ansley to return as a wildcard and was the first to congratulate her after she advanced 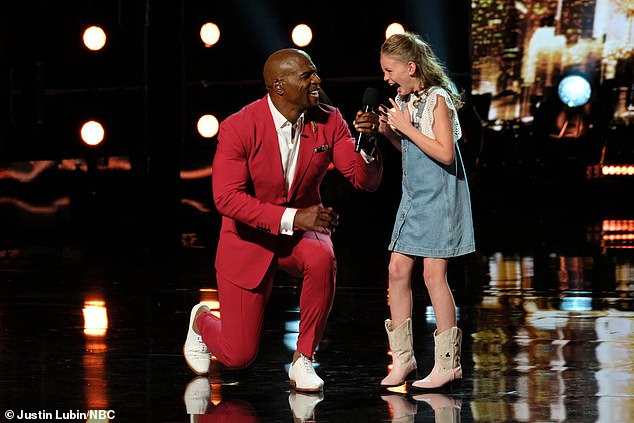 Emotional moment: AGT host Terry Crew took a knee as he interviewed Ansley after she won the Dunkin’ Save 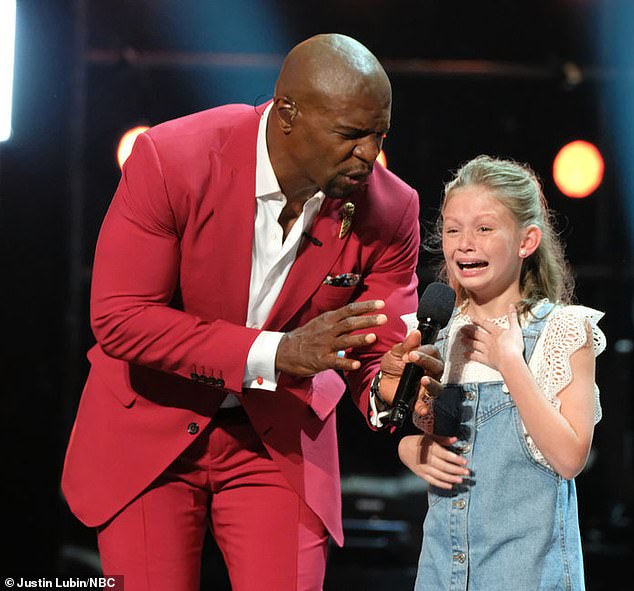 No words: Ansley was at a loss for words after making it to the semis

‘You were in the bottom three, but in that danger zone and the public brought you back once again. So, what do you take from that? The public really like you, support you and admire your spirit,’ he added.

The first live results show of season 14 saw seven of 12 performers from the first group of quarterfinalists advance while five were sent home.

Black-light painter Alex Dowis was the first to move into the semis. 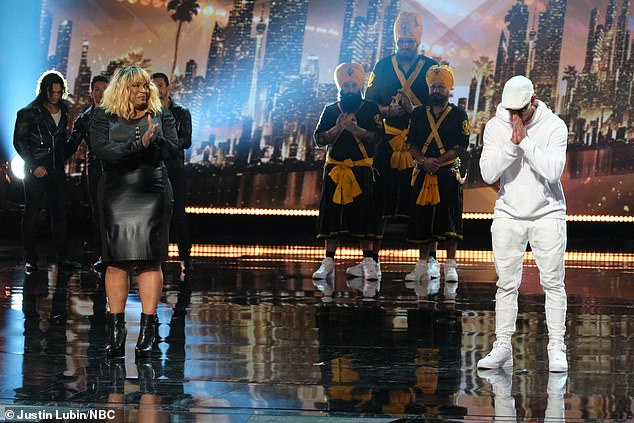 First in: Alex Dowis was the first to make the semis as singer Carmen Carter was eliminated 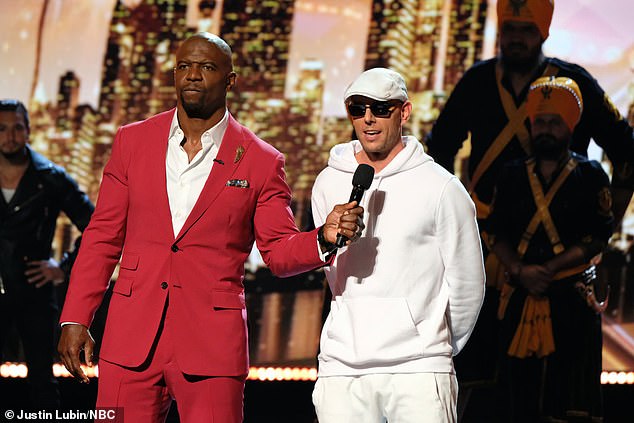 Street art: The black-light painter from Prague impressed with his live artwork Monday depicting the evolution of man

Luke Islam, 12, who earned a Golden Buzzer from judge Julianne Hough, 31, was next to advance after performing his version of ‘You Will Be Found’ from the musical Dear Evan Hansen.

‘I think ”proud” is the perfect word. Thank you so much for coming up, showing up here and delivering – not just tonight. I see a long, long career in front of you,’ Julianne told the boy.

Terry brought out blind and autistic singer Kodi Lee, 22, who was the golden buzzer pick of judge Gabrielle Union, 46, and the quartet Voices Of Service as the field continued to narrow. 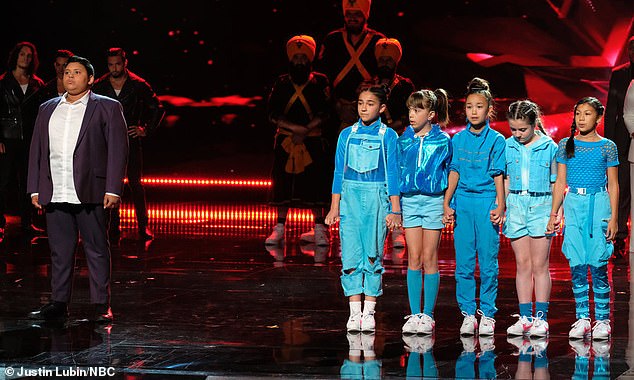 Young singers: Luke Islam, 12, who earned a Golden Buzzer from judge Julianne Hough, 31, was next to move onto the semis as girl group GFORCE was eliminated 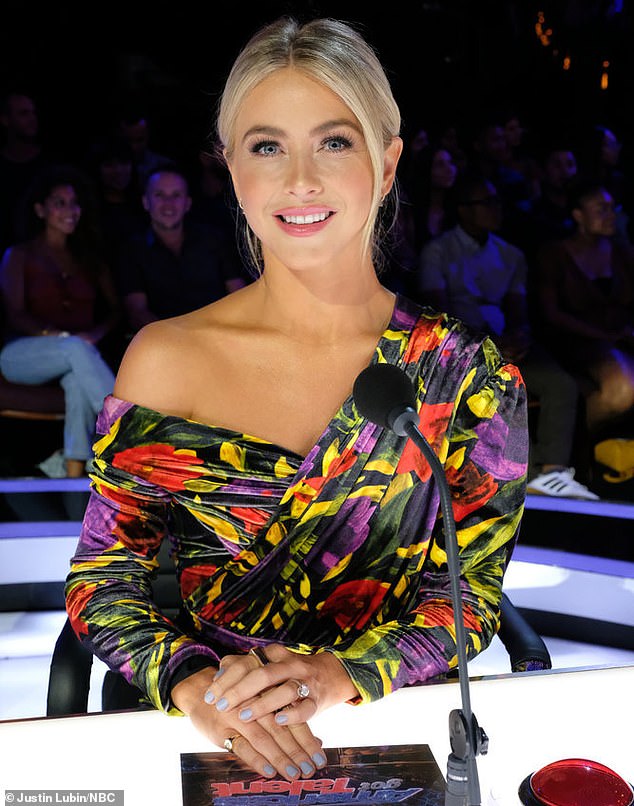 Proud judge: Julianne was proud of her golden buzzer pick Luke as he moved forward 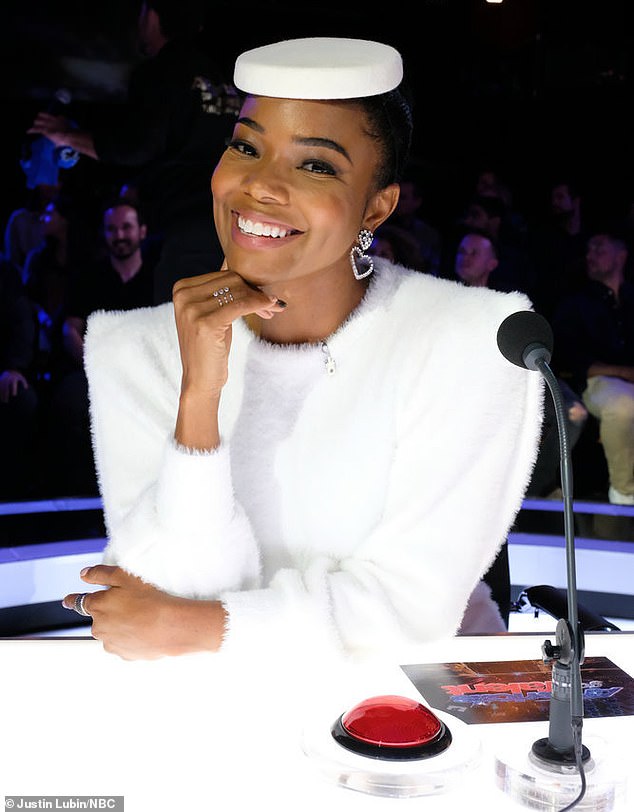 ‘America has voted and the next going into the semis is …both of you!,’ Terry told the contestants who were expecting only one act to advance.

‘Very naughty, Terry Crews. I could not be more thrilled for both acts. They absolutely deserve it,’ Simon said.

Danger act Messoudi Brothers and comic impressionist Greg Morton were the next to advance before Ansley was declared the winner of the Dunkin’ Save and took the seventh spot. 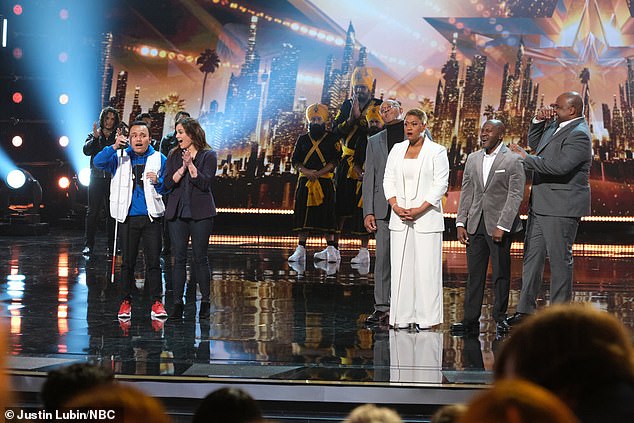 Very naughty: Terry told Kodi Lee and Voices Of Service they were both moving onto the semis as they expected one would be eliminated 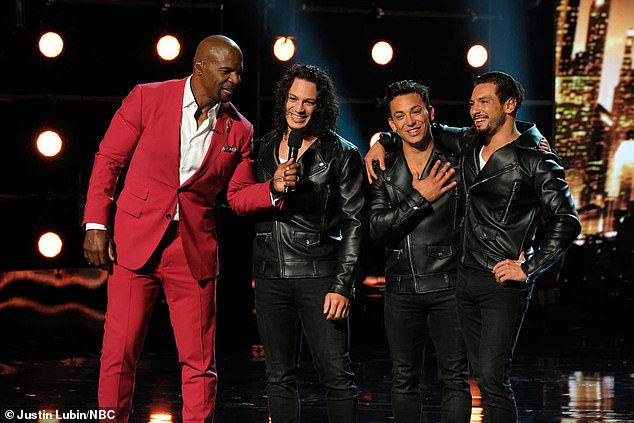 Family affair: Danger act Messoudi Brothers also made it to the next round 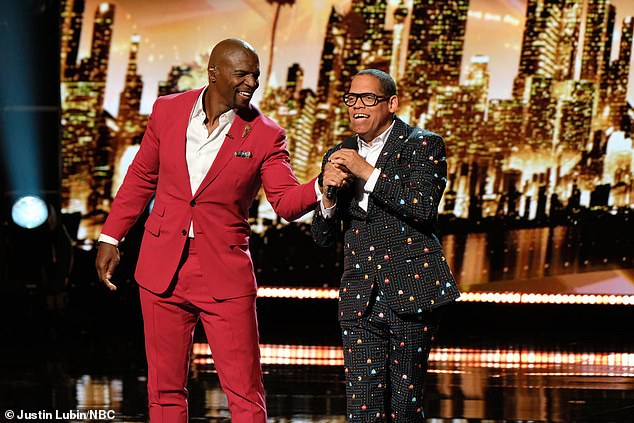 Comic impressions: Greg Morton made it to the semis with his impressions of Hollywood stars

America’s Got Talent will return Tuesday on NBC with the next batch of 12 quarterfinalists performing live in Hollywood. 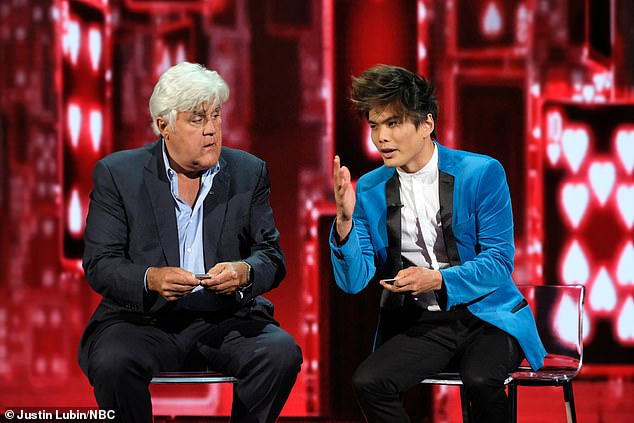 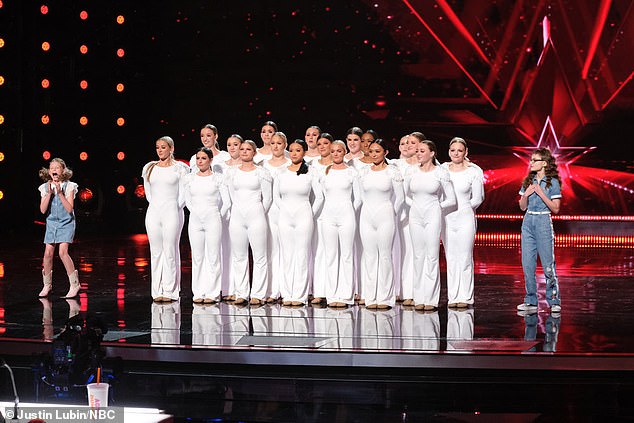 The moment: Ansley reacted as she learned she won the Dunkin’ Save as the Emerald Belles and Sophie Pecora were eliminated