Amy Schumer gave a rousing speech at the March for Our Lives rally in Los Angeles in which she accused the NRA of ‘killing our children.’

Schumer was one of a number of celebrities who made an appearance at the march, which was a nationwide event in dozens of cities that drew millions of people.

She took to the podium at downtown Los Angeles’ Grand Park on Saturday and forcefully denounced America’s gun culture.

‘Thank you students and everyone here for standing up and saying, “no more”,’ Schumer said.

‘How do they sleep at night? You are killing children.’

Schumer said she was ready for conservatives to dismiss her as another ‘Hollywood liberal’ – ‘as if there’s something in it for us.’

‘Well, what’s in it for us is knowing we’re doing our part to keep our children alive,’ Schumer said.

The actress said that she expects to ‘sell half as many tickets’ to her stand-up shows as a consequence of her anti-gun stance.

Schumer said she was willing to pay that price if it meant ‘standing up for what’s right.’

‘You see that, politicians?’ she asked.

‘You can make a little less money and be able to look at yourself in the mirror with no blood on your hands.’

Schumer became more active politically after a shooting in a Louisiana cinema that was screening her movie.

In July 2015, two people were killed when a gunman opened fire in a movie theater in Lafayette while it was playing Schumer’s comedy Trainwreck.

The gunman, 59-year-old John Russell Houser, turned the gun on himself and committed suicide before police could arrest him.

That same summer, Schumer, shaken by the shooting, teamed up with her cousin, Senator Chuck Schumer, the Democrat from New York, to try and advance gun control legislation. 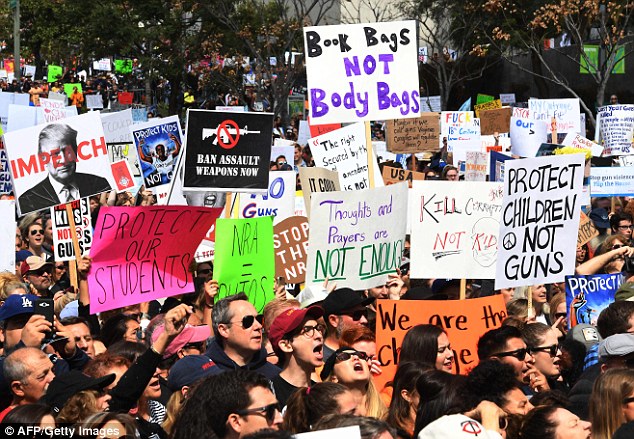 Schumer wasn’t the only big name celebrity to show her support for the cause on Saturday.

Still, the protests were deeply personal for some of the celebrities involved.

Jennifer Hudson, who performed The Times They Are A Changin’ to cap Saturday’s March for Our Lives rally in Washington, D.C., alluded to the shooting deaths of her mother, brother and 7-year-old nephew in 2008.

‘We’ve all lost somebody. … We’ve all got a purpose. And we want what? We want change,’ she said, encouraging the vast crowd to join her in song.

McCartney said his decision to take part in the New York City rally was prompted by the 1980 Manhattan shooting death of John Lennon, his former Beatles bandmate.

‘One of my best friends was killed in gun violence, right ’round here, so it’s important to me,’ he told CNN.

Asked what he hoped could be accomplished by the event, McCartney opened his jacket to show the slogan emblazoned on his black T-shirt: ‘We can end gun violence.’ 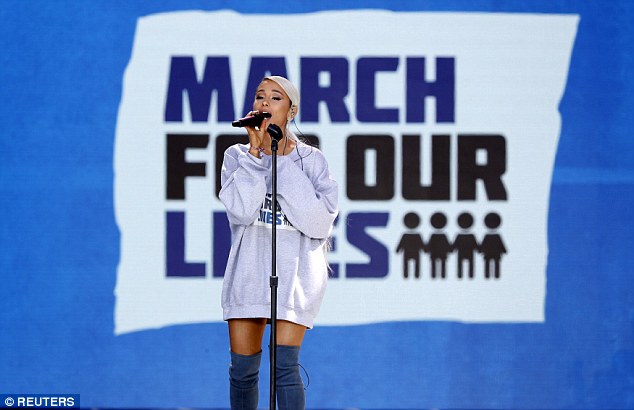 Hudson, appearing tearful as she concluded her appearance, was backed by members of a Washington choir and survivors of the February 14 Parkland, Florida, high school shooting.

Students from the school led rallies attended by hundreds of thousands of people in the nation’s capital and other US cities.

‘This song is dedicated to Stephon Clark, Decynthia Clements and all the unarmed black men and women killed by police weapons,’ Mensa said before performing Now We Could Be Free.

Grande encountered another iteration of violence when her 2017 Manchester, England, concert was bombed, killing 22 people and injuring scores of others.