An Inspector Calls… at Bingham Riverhouse where you should ‘choose your room with care, drink by the bottle – and beware of big, hairy spiders’

One of the main draws of Bingham Riverhouse is its garden on the banks of the Thames. I look forward to sitting there with a book and a glass of something or other.

However, on arrival, we’re told that a private function is being held and so the garden is closed. Surely, in a small hotel such as this (15 rooms), we should have been informed in advance?

We had been quoted £228 room-only for a shoebox overlooking the busy Petersham Road, but managed to get it down to £200, with breakfast and parking included.

Turns out it’s really a single room, hence only one set of towels and one bathrobe. We should have been told this, too.

And, while the public areas and most of the rooms in the two joined-up, listed Georgian townhouses (built in 1740) were revamped in January, ours wasn’t, and it’s down-at-heel.

A giant spider sits on the window ledge — sorry, but I have a thing about spiders, and my wife can’t face this monster, so we leave it to the man who shows us to the room. He doesn’t much fancy it, either.

‘I’ll be back,’ he says, before returning with a flannel to deal with the intruder.

Less excusable is the gap under the door, about 4 in at its highest; the wonky electric sockets; brown curtains with an ugly sheen; battered desk; two brown single-bed headboards; and rusty old plug in the basin. Then we hear a noise coming from behind one of the walls. Two staff members come up and agree something should be done — but what? There are no rooms available and the maintenance man is off-duty.

We go for a walk along the river beside the famous Petersham Meadows and, when we return, the noise has abated. 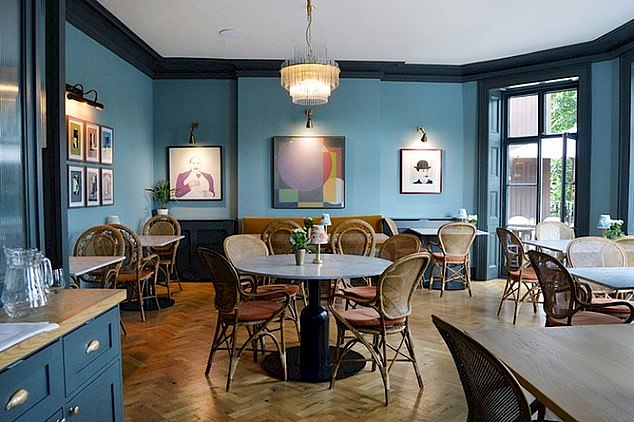 ‘The bar and the drawing room, now the dining room, have been delightfully brought to life,’ writes The Inspector

The January refurbishment seemingly did not extend to the staircase, whose bannisters are chipped — but the bar and the drawing room, now the dining room, have been delightfully brought to life.

The part of the dining room where we eat is lined with bookshelves filled with Penguin paperbacks. Elsewhere, there’s vibrant modern art, comfortable armchairs and battery-operated lanterns.

Dinner is pricey, the wines outrageously so — as in £20 for a 175ml glass of French Semillon and £19 for a red from Puglia.

It seems chef Andrew Cole is trying to emulate his predecessor, Shay Cooper, who gained a Michelin star here in 2012.

But we’re surprised that, of six mains, there’s only one meat option, lamb loin, and that comes with a £6 supplement.

So choose your room with care, ask if any functions are scheduled, drink by the bottle — and beware of big, hairy spiders.