Like many a former flower child, I long ago consigned my joss sticks, beads and long flowing dresses to the jumble.

But perhaps I was too hasty. These days, the styles of my youth are back in fashion, alongside all the lifestyle trends that we so enthusiastically embraced.

Hollywood stars are filling their homes with ‘healing’ crystals, Silicon Valley executives are experimenting with LSD as a short-cut to creativity, while once-suspect practices such as yoga and veganism are so mainstream as to be commonplace.

And, now, transcendental meditation is the latest throwback to the Swinging Sixties to see a resurgence in popularity.

The last time I practised this form of meditation was in Amsterdam in the 1960s, when I was working there as a journalist. Back then, my Dutch friends were all zealously into this type of meditation.

Angela Neustatter, pictured, gives transcendental meditation another go as part of the latest throwback to the Swinging Sixties seeing a resurgence in popularity

TM, as they called it, epitomised the mood in youth culture: offering them a way to tune into a higher state of being, find spiritual harmony and to escape the conservative culture in which they had grown up.

And, of course, TM was taken up by none other than John, Paul, George and Ringo, after the Fab Four met the Maharishi Mahesh Yogi, who developed the technique and founded the Maharishi Foundation to spread the movement internationally. Famously, the Beatles spent weeks studying with the guru in India, making him their spiritual adviser.

Over several months, I also attended evening sessions at a canalside centre where candles flickered, statuettes of Eastern gods stood on a table and the air was rich with a mix of incense and joints smoked before people got down to meditating.

The Amsterdammers liked to make TM a touchy-feely experience, so we would link arms and sit cross-legged in a ring, or bear-hug each other at the beginning and end of a session. On one occasion we were commanded to go down on all fours, move around and rub noses. That was a hippie move too far for me, but I did come to appreciate the value of sitting quietly and reciting a ‘mantra’.

One of the defining characteristics of TM, as opposed to other types of meditation, is that you are encouraged to repeat a specific word, to help clear your mind.

Eyes closed, we would let the mind be as free as we could, to reach a state that felt as restful as sleep, but to remain awake.

I was intrigued by the idea that something so simple could be an antidote to the state of internal chaos that I experienced all too easily.

And, although I didn’t attend TM sessions regularly, I would call on the technique when the pace of life and work wore me out. Yet, when I returned to England at the end of the Sixties, the practice was starting to be discredited.

The Beatles’ relationship with their guru had soured and I stopped turning to the technique in moments of stress.

Then, last summer, my husband, Olly, and I spent four days at the Horakuan Temple in the mountains of Northern Japan, where we meditated twice a day and were struck by how good it felt.

Uncharacteristically, we didn’t have a moment of domestic discord during that time.

I was reminded of how TM had once helped me reach a state of calm in Amsterdam and, back in London, signed up for a four-session, one-to-one course.

I am not the only one showing renewed interest in TM.

Celebrities such as Gwyneth Paltrow, Stella McCartney and Oprah Winfrey say they have come to rely on TM, and Meghan Markle, we hear, practises a similar meditation twice a day. 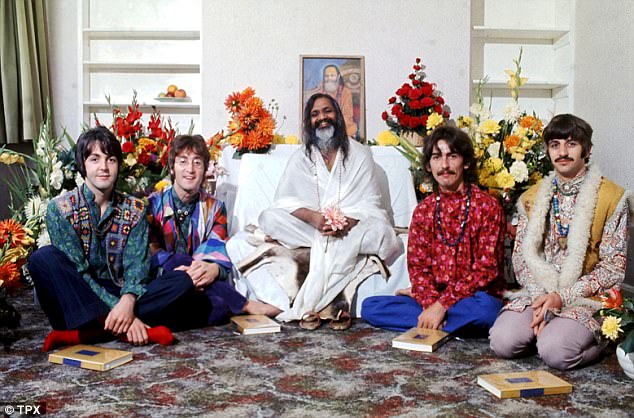 But it’s not just the rich and famous. The David Lynch Foundation — a non-profit organisation set up by the American filmmaker 13 years ago in an effort to make TM available to troubled children, women in refuges and the homeless — has set up a base in the UK and is running pilot schemes, teaching TM at three schools in London.

So it is I find myself facing a small shrine with a basket of flowers and a flickering candle, while incense fills the room with a spicy aroma.

The centrepiece is a coloured portrait of a guru with explosive beard and striking dress and I anticipate that my own teacher will be similarly exotic. Instead, David Hughes, a clean-shaven, soft-spoken man in a dark suit, born in the North of England, introduces himself as my guide through the TM course.

David discovered TM as a 19-year-old and trained with the Maharishi in the 1970s.

He works with both the David Lynch Foundation and The Maharishi Foundation, which offers public courses in transcendental meditation. David begins the first of our four 90-minute sessions by explaining that society is suffering from ‘an epidemic of stress’, which could be reduced if TM were commonly practised.

There have, he says, been more than 600 scientific studies published linking the practice to drops in coronary heart disease, reductions in blood pressure and great improvements in mental and emotional health.

One particularly striking study reported by the American Journal of Cardiology, and funded by the U.S. government, found that a group of older people practising TM over a sustained period suffered 30 per cent fewer deaths from heart disease and 49 per cent fewer from cancer than those in a group who didn’t meditate at all.

David tells me what to expect. ‘TM is ridiculously simple and it should be an effortless process.

‘It is not about concentration, mind control, or being guided, but about enabling the mind to [in the words of American TM teacher, Bob Roth] transcend and effortlessly access the deep stillness that lies within every human being.’

The practice is not associated with any belief system, he adds.

I want to understand the difference between TM and mindfulness, the popular movement that encourages us to focus on the present to promote mental health. ‘TM,’ says David, ‘is about not harnessing the mind to anything, so that it can find its way to a reservoir of pure happiness, dynamism and creativity’, transcending surface-level thinking to move towards silence.

In contrast, mindfulness is about controlling the mind to clear it of thoughts. But how do I practise TM now? Amsterdam was a long time ago.

David gives me a mantra to use as I meditate. This is a meaningless word, he explains, to help me let go of mental chatter. I am to recite it loudly at first, then reduce it to a whisper. And I am sworn to secrecy — telling anyone my personal mantra apparently diffuses its value. 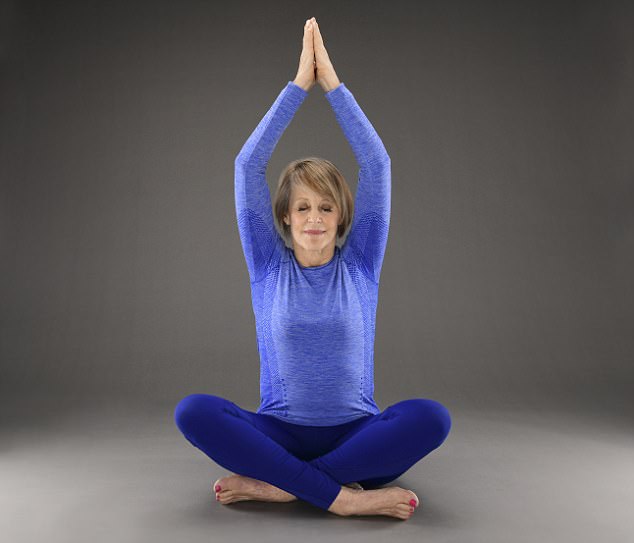 David gives me a mantra to use as I meditate. This is a meaningless word, he explains, to help me let go of mental chatter. I am to recite it loudly at first, then reduce it to a whisper

We then find a comfortable way to sit and close our eyes, setting the mind free to move towards the state of inner tranquillity. This state can be tapped into without making a conscious effort or any further training, I am told, if I simply keep meditating for two 20-minute sessions a day.

I won’t pretend I achieved instant bliss in this first session. I hadn’t reckoned with the army of chatterboxes inside my head reminding me I need to buy food, pick up my grandson and finish an article — sabotaging any notion of inner calm.

During our second session, David tells me I am seeing these incoming thoughts as the enemy — distracting and stopping me reaching the stillness level. ‘Do not fight them,’ he instructs, ‘just let the mantra take over.’ This time, thoughts and questions drift past me like clouds and I am aware of the way my breath quietens.

Between sessions, I meditate at home and feel peaceful and relaxed at the end.

At our third session, David talks about the difference it can make to day-to-day well-being if we know that in just 20 minutes we can distance ourselves from problems that appear insoluble. It’s then possible to tackle them more calmly.

But how much of these benefits stem from auto-suggestion, where if you want to believe something enough, it seems to happen? David tells me: ‘If you keep up the daily sessions for more than three months and feel the benefits, then it is real. Placebo effects wear off after this length of time.’

Some people say TM doesn’t work for them, he adds. ‘They fear they’re not spiritual enough. It can be difficult to grasp the idea that finding the process challenging is the point.’

By our fourth session I think I have got that. I find myself determinedly making time for the twice-daily meditations at home. But David has seen this kind of instant conversion before and knows disillusion can kick in.

I should not expect a dramatic change in myself, he warns, but find a sense of well-being and relaxation during practice. The benefits increase if you make TM a lifetime habit, he says.

Certainly, I hope to keep it up so I can reach the promised state of ‘pure consciousness’ over years ahead, but I know that the spirit can be weak.

That said, Paul McCartney and Ringo Starr still practise TM and I am inspired by Ringo declaring that meditating helps him ‘make molehills out of mountains’. Now, if only I could find my old joss sticks . . .