Animal rights activists invaded Brighton supermarkets, including Sainsbury’s and Aldi to protest against their selling of free-range eggs.

Direct Action Everywhere (DxE) protesters also stormed Hisbe, a supermarket in the seaside town that prides itself on the ethical treatment of animals, and livestreamed their demonstrations last night.

They can be seen urging people not to buy or sell eggs in videos on the DxE Brighton Facebook page that shows them shouting ‘there’s never an excuse for animal use’ and ‘free range eggs are a lie, animals do not want to die’.

Activists read speeches accusing the egg industry of torturing animals even when their product carries a free range sticker.

The group said that chickens often die while laying or are slaughtered when they reach 18 months.

And they pointed to male chicks being gassed or ground alive in hatcheries. It comes after footage from an investigation of free range Hoads Farm revealed mounds of corpses left to infect living hens as they rotted alongside them. 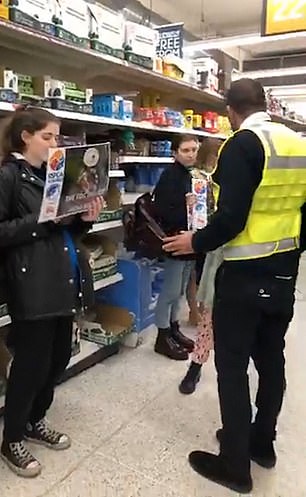 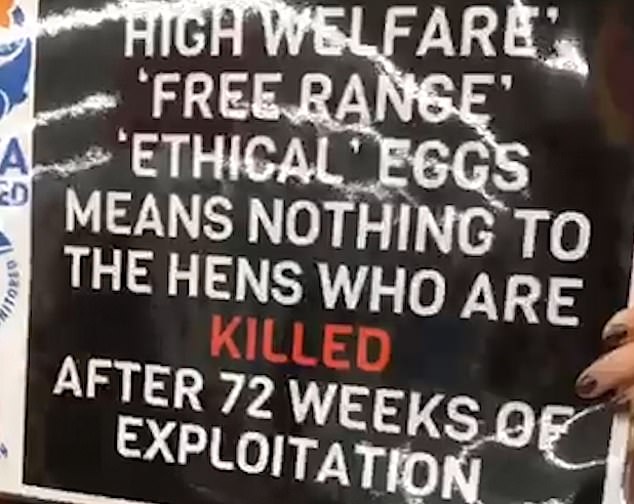 Pictured: A sign held up by the protesters during their demonstrations across Brighton shops last night

A video also showed emaciated birds crammed into filthy aisles and and rotten egg fluids flowing in a packaging area.

The DxE activists occupied the shops for 20 minutes then left of their own accord, with a spokeswoman saying animal cruelty stretches beyond Hoads Farm, which prides itself on ethical practices.

‘These disruptions are not just about Hoads Farm, they are about all eggs,’ she said. ‘There is no such thing as humane eggs. 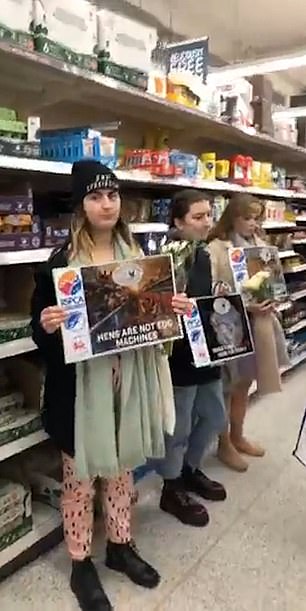 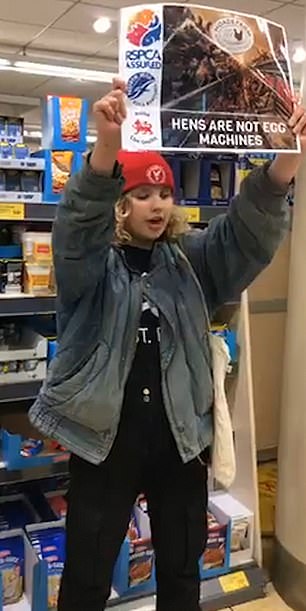 ‘Hisbe has a sign in their shop that says their eggs are from “genuinely liberated hens” but they are not liberated if their bodies are being used for human gain. The 50 hens that were taken from Hoads Farm are geuinely liberated.

‘We are exposing a free range farm because we are demanding that animals be recognised as individuals with the right to bodily autonomy. Other animals are not on this earth for us to use.

‘We are not here to argue that farms need higher welfare standards, because we believe exploiting animals is wrong and it needs to stop. However, showing people the reality behind their free range label is a start to raising awareness.’

A Sainsbury’s spokesperson said: ‘A group visited our Brighton superstore for a brief time and left peacefully.

‘The welfare of our animals is extremely important and Hoads Farm free range eggs have been withdrawn from sale while we investigate these allegations.’