Andy Hardaker paid over £1,900 for 6 gold coins which did not arrive for over a month

Another Royal Mint customer has been handed a several hundred-pound payout after an order of gold bullion coins was delivered more than a month after it was placed, and after he had asked for it to be cancelled.

Andy Hardaker, a 54-year-old gardener from North Yorkshire, also complained that a different package of coins from the Mint arrived with the contents clearly described on the label, contrary to its claims that precious metal parcels are meant to be ‘discreet and unbranded.’

Andy made five purchases from the Mint at the start of February, four of which came within three days.

He was told by the Mint on 5 February the order was delayed ‘due to significant levels of demand for precious metals in recent days.’

This is Money has previously reported on how booming demand for precious metals from the Royal Mint has seen its bullion-dealing service charge customers for out-of-stock goods which have turned up months late.

The Mint’s own delivery advice on its website says in-stock items should be despatched within 21 working days. If it cannot meet that deadline, customers are supposed to be offered substitute goods, a revised delivery date, or a full refund.

Investors bought up gold as stock markets around the world fell in response to the coronavirus pandemic last spring and continue to do so as a hedge against inflation or to try and beat ultra-low interest rates.

Andy told This is Money: ‘I bought my first coins this year after realising that I had just over 10 years to retirement and that my state pension is barely going to cover my rent by then, never mind anything else like food and utilities.

‘I had savings in the bank that were earning nothing, and I kept eating into them. I started to see news stories about people buying gold so looked into it, saw it was free of capital gains tax and saw that as a general rule it has always increased in value over a 10-year period.’

However, after waiting over a month, he was told by the Mint that ‘your order has been processed and is currently awaiting despatch. We have experienced a slight delay with both products due to fewer staff on site, however, we aim to despatch your order within the next 14 days.’ 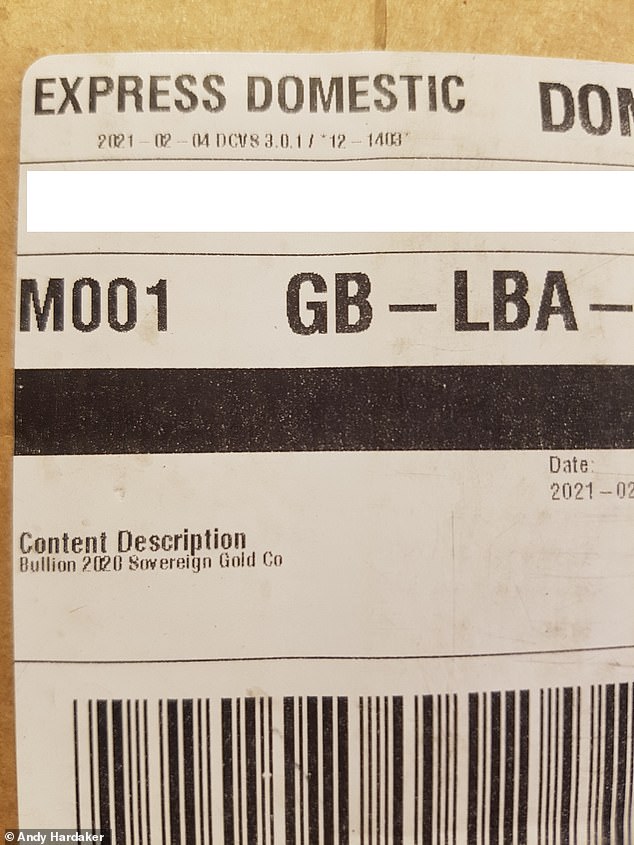 The Mint says goods should be packaged in a way that is discreet and unbranded. However in Andy’s case the contents of the goods were clearly displayed as ‘bullion’ and ‘gold’

Realising this could lead to him waiting as long as 46 days to receive the order, he asked the Mint on 4 March to cancel it to receive a refund. ‘My order remains undelivered and my messages remain unreplied to’, he said.

By this point, a fall in the price of gold meant his order was worth £400 less than it had been when he placed it.

The Mint has repeatedly maintained the price of its bullion products ‘fluctuate in line with live metal prices, and price is fixed at the point the customer confirms the transaction.’ 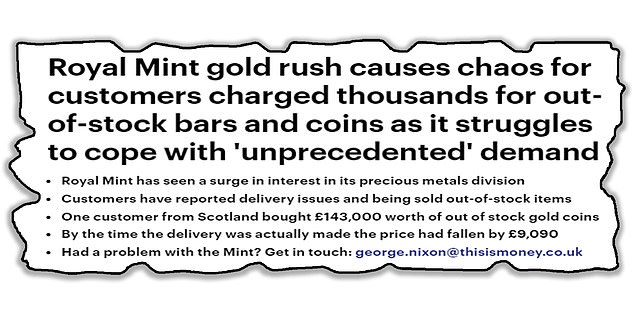 This stance initially left a fellow This is Money reader from Dundee, Scotland, who tipped us off to the problems facing the Mint’s customers, over £9,000 out of pocket. However after our intervention and his persistence the Mint agreed to refund him the difference plus further compensation.

However, despite this request, he received an automated email from the Mint at 10.18pm telling him the order had been dispatched, and arrived on 6 March.

He emailed This is Money after we published how our reader from Scotland had received a £15,500 payout from the Mint, and told us he had received no explanation as to why the order was confirmed after he asked for it to be cancelled.

After we contacted the Mint explaining his situation, he said: ‘I had a very apologetic customer services agent call me from the Royal Mint, wanting to rectify the mistake they had made.

‘I should have had an email offering me the chance to cancel my order but he could see they hadn’t sent it to me.’

Andy said he negotiated a refund of the difference in purchase price on the day he bought it and the day the coins arrived, ‘as I would only have spent the refund re-ordering the same coins at the lower price.’

A spokesperson for the Royal Mint told This is Money: ‘We would like to apologise to the customer for the delay to his order, and have been in direct contact to resolve the issue to his satisfaction.’

‘Our products always leave our site in discreet packaging, however due to recent customs changes our delivery partners have applied additional labels. We are working with our partners to address this.’

Andrew Dickey, the director of its precious metals division, previously told our reader from Dundee that his experience had ‘highlighted a number of issues that we recognise as falling below our service expectations for customers’ and that actions were being taken to ‘remedy the issues you have raised with us.’