In event of a moon disaster: 1969 speech prepared for then-president Nixon reveals Apollo 11 astronauts would have been abandoned and left to ‘STARVE or commit suicide’ if return plans failed

There was a chance that the first men to walk on the moon’s surface might never return.

That grim prospect, though ultimately unrealized, wasn’t lost on some of the most important people eagerly watching astronauts Neil Armstrong, Michael Collins, and Edwin ‘Buzz’ Aldrin venture forth into space during NASA’s historic Apollo 11 landing.

In a contingency speech written almost exactly 50 years ago for President Richard Nixon, titled ‘IN EVENT OF MOON DISASTER,’ speechwriter William Safire opined on the hypothetical loss of the astronauts.

President Richard Nixon was prepared in the even that NASA’s Apollo 11 mission ended in tragedy. A contingency speech (pictured) was written to address tragedy, if it occurred

‘Fate has ordained that the men who went to the moon to explore in peace will stay on the moon to rest in peace,’ reads the opening paragraph to the speech.

‘These brave men, Neil Armstrong and Edwin Aldrin, know that there is no hope for their recovery.

‘But they also know that there is hope for mankind in their sacrifice.’

According to the documents, Nixon’s address would have followed calls to the astronauts’ wives which the speech describes as ‘widows-to-be’ and set forth instructions for a clergy member.

‘A clergyman should adopt the same procedure as a burial at sea, commending their souls to ‘the deepest of the deep,’ concluding with the Lord’s Prayer,’ reads the speech. 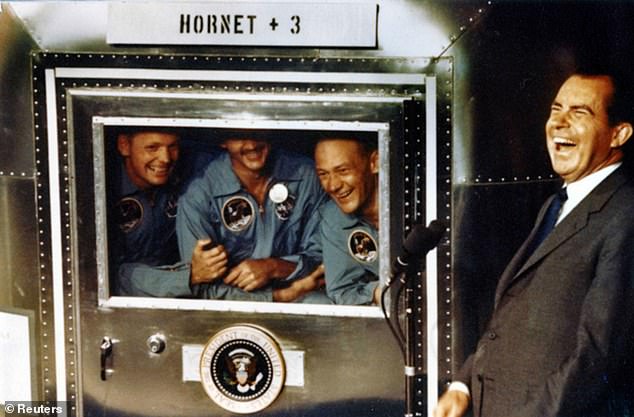 Richard Nixon (right) was prepared in the event that astronauts in the first humans lunar surface walk were stranded and left for dead. In the 1969 photo, astronauts Neil Armstrong (L), Michael Collins (C), and Buzz Aldrin laugh with the president aboard the USS Hornet 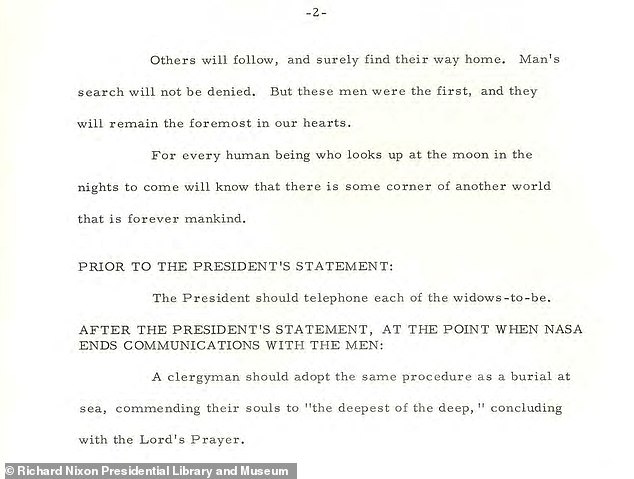 In a contingency speech written almost exactly 50 years ago for President Richard Nixon, titled ‘IN EVENT OF MOON DISASTER,’ speechwriter William Safire opined on the hypothetical loss of the astronauts

At this point, as reported by Meet the Press in 1999, astronauts would have been forced to come to terms with their fate.

Safire told the outlet that abandonment of the astronauts would portend two fatal outcomes. 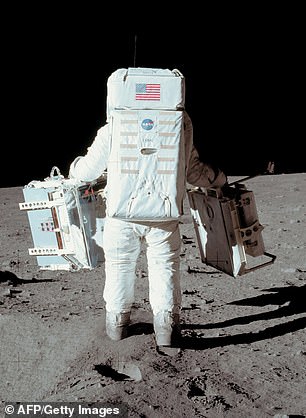 ‘If they couldn’t [do it], they’d have to be abandoned on the moon, left to die there,’ Safire said in an interview with Meet the Press.

‘The men would either have to starve to death or commit suicide.’

Even in the case of a fatal outcome, the prospective speech leaves the door open for future space exploration, setting the stage for missions to come.

‘Others will follow, and surely find their way home. Man’s search will not be denied. But these men were the first, and they will remain the foremost in our hearts,’ reads the speech.

Fortunately for the astronauts, their loved ones, and those looking to expand space exploration, all three of the mission’s crew members made it back safely and instead of the somber speech, the explorers received a congratulatory — and televised — phone call.

‘Because of what you have done, the heavens have become a part of man’s world,’ Nixon told the astronauts.