Plug adaptors that may give you an electric shock have been recalled by Apple.

The company was made aware of six separate incidents worldwide in which people were given shocks by the products, MailOnline understands.

Apple included the AC wall plug adaptors with some of its iOS and Mac products which were shipped in the UK, Singapore and Hong Kong.

A three-pronged plug sold in the Apple World Travel Adaptor Kit may also pose a risk to consumers.

Affected plugs are white, have no letters on the inside slot and were produced and shipped between 2003 and 2010.

Customers who own them are asked to stop using them immediately and take them into an Apple store to be replaced.

Apple have announced a voluntary recall of some of its plug adaptors because of a risk of electric shock. Two types of the affected plugs were shipped in the UK, Singapore and Hong Kong. Six incidents have been reported

Apple customers can spot if their device is among those recalled by looking at the inside of the white adaptor.

Affected devices have ‘no letters on the inside slot where it attaches to the main power adaptor.’

Writing on its support page they said that in ‘very rare cases’, its three-prong AC wall plug adaptors may break open and create a risk of electrical shock.

It warned that this could leave people at risk if they touched the exposed metal components.

The firm said: ‘Customer safety is always Apple’s top priority and we have voluntarily decided to exchange affected wall plug adapters with a new adapter, free of charge.

‘We encourage customers to exchange their wall plug adapter using the process below.’

Apple did not reveal any details of whether anyone was injured by the fault. 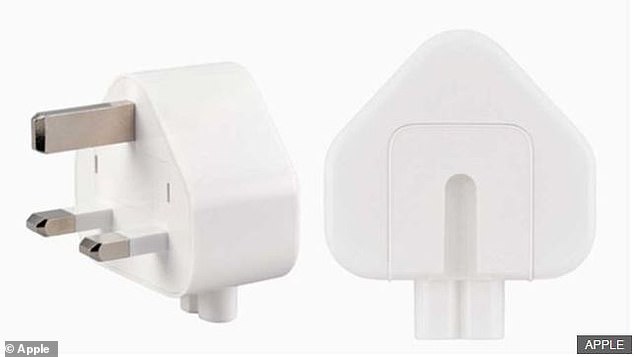 The company were made aware of six separate incidents worldwide in which people were given shocks by the products. They were produced and shipped over a seven year period between 2003 and 2010. Pictured, this product is being recalled

WHICH ADAPTORS ARE AFFECTED AND HOW CAN YOU SPOT IF YOURS IS FAULTY?

Affected plugs are white, with no letters on the inside slot.

If the AC wall plug adapter was shipped with your Mac or  iOS device between 2003 and 2010.

A three-pronged plug included in the World Travel Adapter kit is also being recalled.

HOW TO IDENTIFY IF YOUR CHARGER IS FAULTY:

Apple customers can spot if their device is among those recalled by looking at the inside of the white adaptor.

Affected devices have ‘no letters on the inside slot where it attaches to the main power adaptor.’

Newer versions, which are not affected, are white with grey on the inside.

Owners of such adaptors can exchange them at Apple Stores or service providers but will need to bring the serial number of the device it was sold with.

A similar scenario happened in 2016 when the company issued a recall of its two-pronged power adaptors designed for use in Continental Europe, Australia, New Zealand, South Korea, Argentina, and Brazil due to the same risk of electrical shock if touched.

Apple said at the time that they were sold over twelve years after some were found to cause a risk of electrical shock.

The company said it was aware of twelve incidents where this had happened.