On paper, Aquaman would appear to have so many things going for it. Dazzling underwater visual effects that pit seahorse-borne armies against shark-mounted cavalry, more trident fights than you can shake, er… a trident at, and Nicole Kidman in a home-made lobster costume. What’s not to like?

Well, unfortunately for the latest instalment of the so-called DC Extended Universe of superheroes, quite a lot. The story-telling is all over the place, its 140-minute running time feels interminable, and much of the acting is downright poor.

Mind you, with lots of the dialogue delivered through a sort of ‘blub, blub, blub’ filter to show it’s being delivered underwater, even Judi Dench (no, of course, she’s not in it) might struggle for dramatic impact. 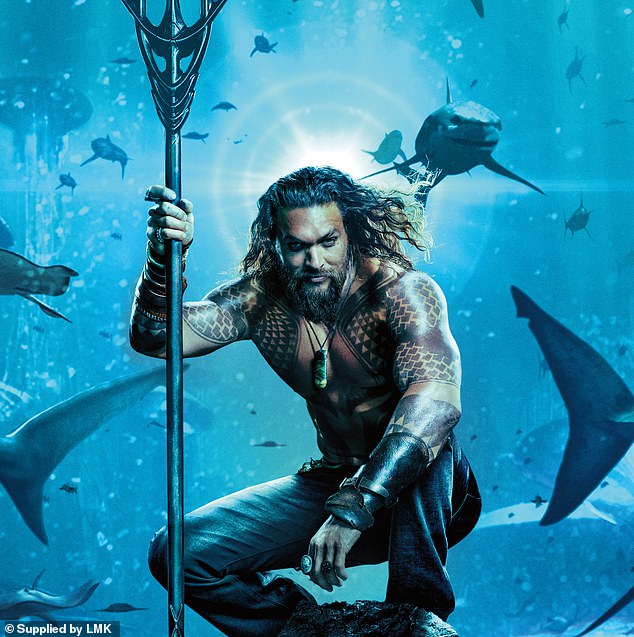 It soon becomes clear that Jason Momoa (above), the Hawaiian-born hunk who plays Aquaman, is no Chris Hemsworth

With director James Wan clearly aiming for the same sort of tongue-in-cheek comic tone that has made Thor such a popular character for DC’s rival, Marvel, it soon becomes clear that Jason Momoa, the Hawaiian-born hunk who plays Aquaman, is no Chris Hemsworth.

At some moments, Momoa seems to have stumbled out of a shampoo commercial, while at others he falls back on his own personal variation on the Blue Steel pout from the male model spoof, Zoolander.

After the 2017 triumph that was Wonder Woman, the previous origins story in the DC series, Aquaman has to go down as a distinctly soggy disappointment. 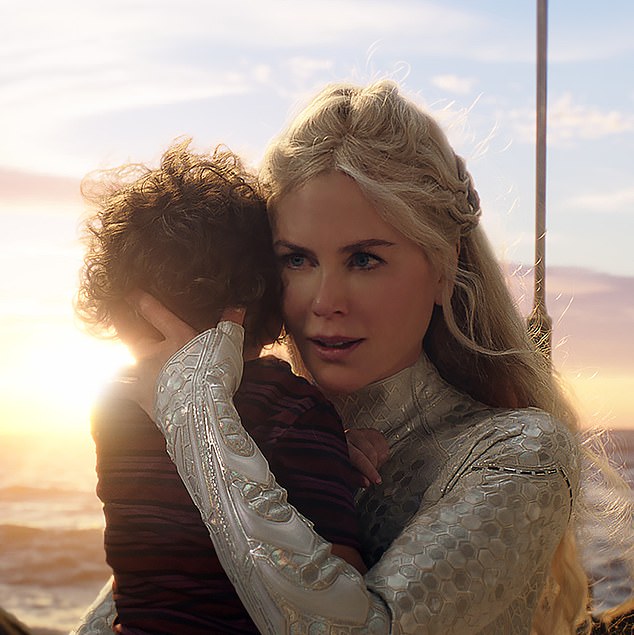 We have to get used to the idea that Arthur Curry is the product of a storm-tossed union between a Maine lighthouse-keeper and the runaway Queen of Atlantis (Nicole Kidman, above)

So what’s going on? Frankly, too much. First, we have to get used to the idea that Arthur Curry (aka Aquaman when he’s grown-up, who can breathe while submerged and is strong enough to toss a nuclear submarine out of the water) is the product of a storm-tossed union between a Maine lighthouse-keeper and the runaway Queen of Atlantis (Kidman, channelling Daryl Hannah in Splash!).

Also, the wicked King Orm (Patrick Wilson) not only turns out to be Arthur’s half-brother but announces his menacing plan to unite the seven underwater kingdoms. Possibly not peacefully. Which, if I’ve got this even vaguely right, would make him Master of the Oceans and give him the sort of marine military mandate to come after us surface-dwellers next.

What’s he so cross with us about? Well, judging by the battleships and garbage tossed on to our beaches in a huge Poseidon-like tempest, it’s the militarisation of the seas and our dumping of rubbish in the oceans. In other words, Orm is doing bad things for good reasons. Which would explain why I was soon as confused as Wilson often looks. 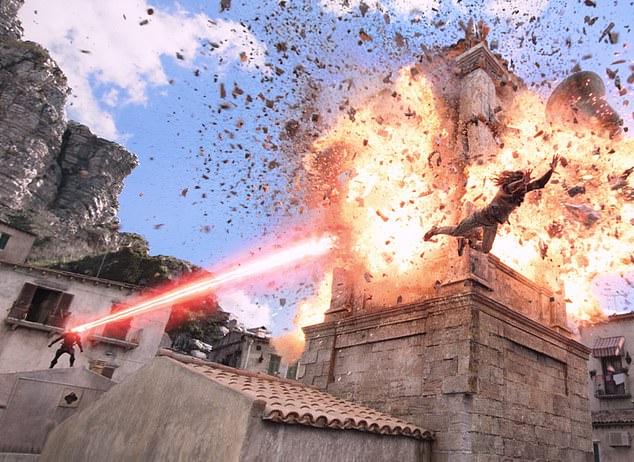 Listen out for a splendidly cast-against-type Julie Andrews as the voice of an ancient sea-monster, a rare moment of fun from Wan, perhaps best known for Fast & Furious 7

Compared to Wonder Woman, Aquaman feels underpowered in every department except visual effects. Acting-wise, Gal Gadot, the Israeli actress who played the title character, was less well known than Momoa is now but not only did she emerge with great personal credit but she was cleverly and sensibly surrounded by actors who gave the production real substance – Chris Pine, Robin Wright and Danny Huston to name but three.

Aquaman, by distinct contrast, has Amber Heard in a red wig, sparkly green jumpsuit and glowy eyes as the flighty but useful- to-have-on-your-side Queen of the Sea, Mera, and that’s about it. Oh, and Kidman in that lobster suit, of course, although hers is but a modest contribution.

Yahya Abdul Mateen, who plays Mamba, couldn’t swim so kept it a secret while he learned – only to find his scenes would be CGI.

Script-wise, Wonder Woman also comes out on top, thanks to its sensitive and sophisticated handling of the First World War, a highly emotive subject that could so easily have tripped it up.

The polluting of the oceans offers similar emotional potential for Aquaman but it’s not realised, partly because of the confused story-telling, partly because it feels like it’s been lazily chucked in for easy topicality, and partly because a lot of the time Momoa makes Arthur a rather charmless joker who seems keener on looking cool and trying to make us laugh (often in vain) than saving the planet. But maybe he’s keeping that for Aquaman 2.

Listen out for a splendidly cast-against-type Julie Andrews as the voice of an ancient sea-monster, a rare moment of fun from Wan, perhaps best known for Fast & Furious 7.

He imbues Aquaman with a similar hyper-kinetic energy and lack of subtlety, demonstrating an impressive mastery of visual effects but surely misjudging the level of acceptable violence for a film clearly seeking a family audience.

It left me weary and water-logged. Blub-blub.

Produced by Peter Jackson and with a screenplay by the writing team behind The Lord Of The Rings, this spectacular-looking adaptation of Philip Reeve’s 2001 fantasy novel should be one of the highlights of the festive cinema season. But it falls horribly flat, hampered by duff casting, a clumsily structured screenplay and too many reminders of Star Wars. 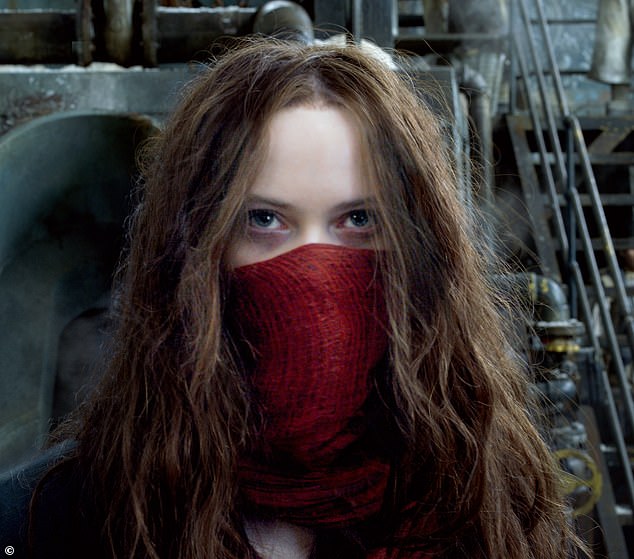 Somewhere, there’s the story of young rebel Hester Shaw (Hera Hilmar, right) wanting to kill London’s scheming head-honcho, Thaddeus Valentine (Hugo Weaving). But it all gets lost in a way that means that if you didn’t know visual-effects expert Christian Rivers was directing his first feature film, you could probably guess.

Spider-Man: Into The Spider-Verse (PG)

Nothing to do with the latest films with Tom Holland as Peter Parker, this is a superbly animated picture that takes Spider-Man right back to his comic-book origins. Which it does by positing the idea that every alternate universe has its own Spider-Man, or does until a huge machine built by the sinister Kingpin blows a hole in the space-time continuum, universes collide and all sorts of versions of the character arrive in the same place. The end result should delight die-hard fans but, at almost two hours, will test less devoted admirers.

After Disobedience comes another tale of illicit lesbian love. Only this one is based on a true story that unfolds in the Massachusetts of 1892 and involves a double murder. Chloë Sevigny and Kristen Stewart star in a drama that proves slow and austere until the blood-spattered last lap.

The House That Jack Built (18)

Told through the eyes of sadistic, misogynistic serial killer Jack (Matt Dillon), this is a clever, shocking and darkly funny horror movie – until Danish film-maker Lars von Trier eventually goes too far for mainstream audiences… as he nearly always does.