A mother-of-one who fell 20-feet down a bank in a motorbike crash, lost her right leg after a flesh-eating bacteria attacked her ‘minor cut’.

Honey Hufstedler, 49, who believes the infection, known as necrotising fasciitis, entered her wound through dirty gravel at the crash scene, was put into a coma for nearly a month.

Doctors thought she had no hope of surviving and told her family to expect the worst, however, Ms Hufstedler claims she saw ‘an angel’ willing her to carry on.

When she eventually woke, Ms Hufstedler, from Conway, Arkansas, was forced to adapt to life without her right limb and chose to shun physiotherapy in favor of at-home rehabilitation.

Ms Hufstedler, a former construction worker, said: ‘I was septic. My leg was rotten. It was dead. It had to go.’

‘I felt like my life was over, but knew I had to carry on and stay alive.’

Now coming up to five years since the June 2013 crash, Ms Hufstedler can walk with a frame and even ride a bicycle.

Honey Hufstedler (pictured her son Zac, 24), who fell 20-feet down a bank in a motorbike crash, lost her right leg after a flesh-eating bacteria attacked her ‘minor cut’

Ms Hufstedler’s limb was amputated from the hip, forcing her to walk with a frame 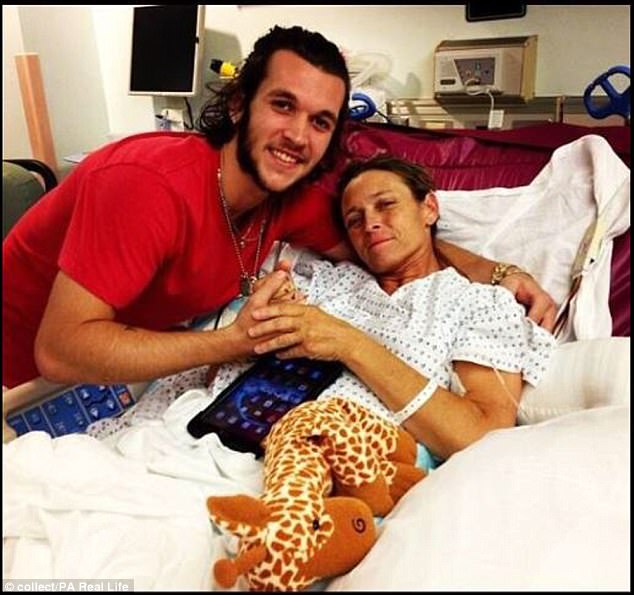 Four days after arriving in hospital, Ms Hufstedler’s leg was gradually sliced away, as doctors fought to reduce the spread of the infection.

Medics eventually realized they needed to remove the entire limb from the hip in order to save her.

Ms Hufstedler said: ‘I was septic. My leg was rotten. It was dead. It had to go.’

Spending the next three weeks in a coma, she woke to find her entire life had changed.

Ms Hufstedler said: ‘It was devastating to fall asleep one day and wake up, nearly a month later, to find I was legless.

‘I felt like my life was over, but knew I had to carry on and stay alive.

‘Whatever would happen, whatever had happened, I was alive.’

‘It’s been tough. But I’m tougher’

A month later, Ms Hufstedler was released from hospital and sent to a rehabilitation clinic for physiotherapy.

Yet, on the first night, she checked herself out and decided to tackle her recovery alone.

Ms Hufstedler said: ‘I decided I could do it alone and with friends. But it was tougher than I first realised. I didn’t know how to get around.

‘But my friends and son, who are amazing, all pulled together and showed me I could do it. 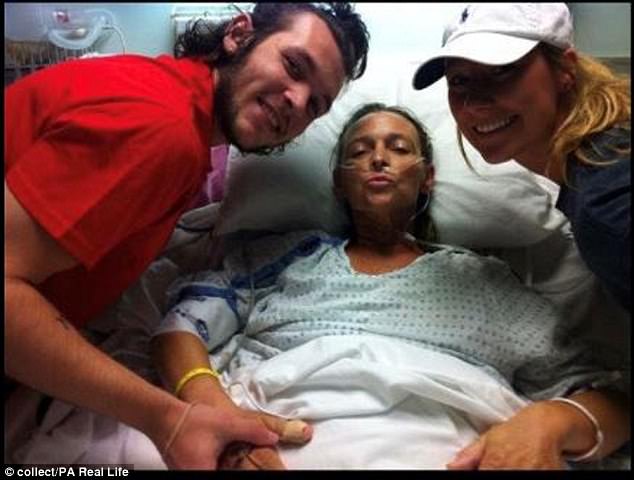 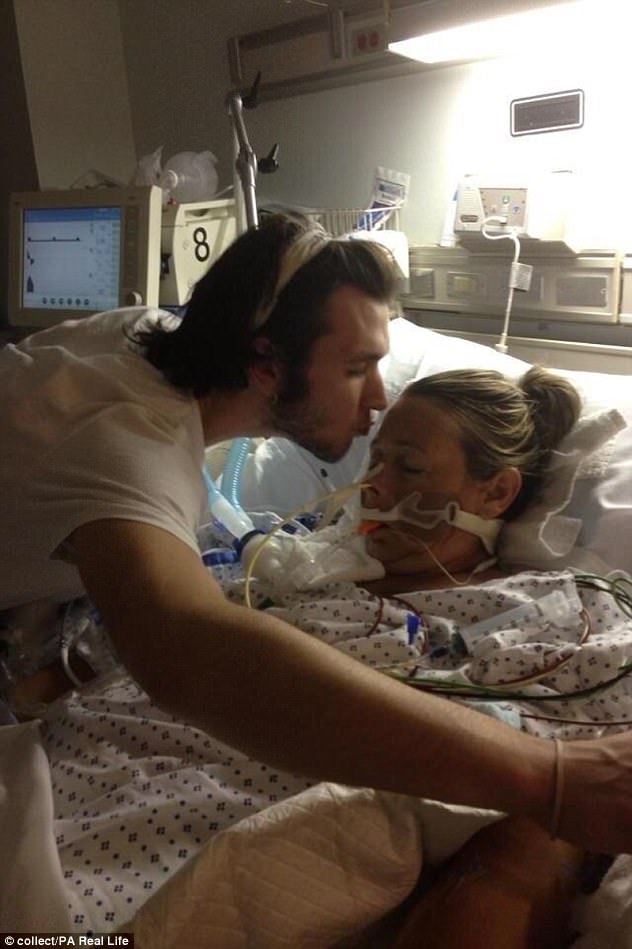 Although expected to not make it, Ms Hufstedler claims ‘an angel’ willed her to keep going 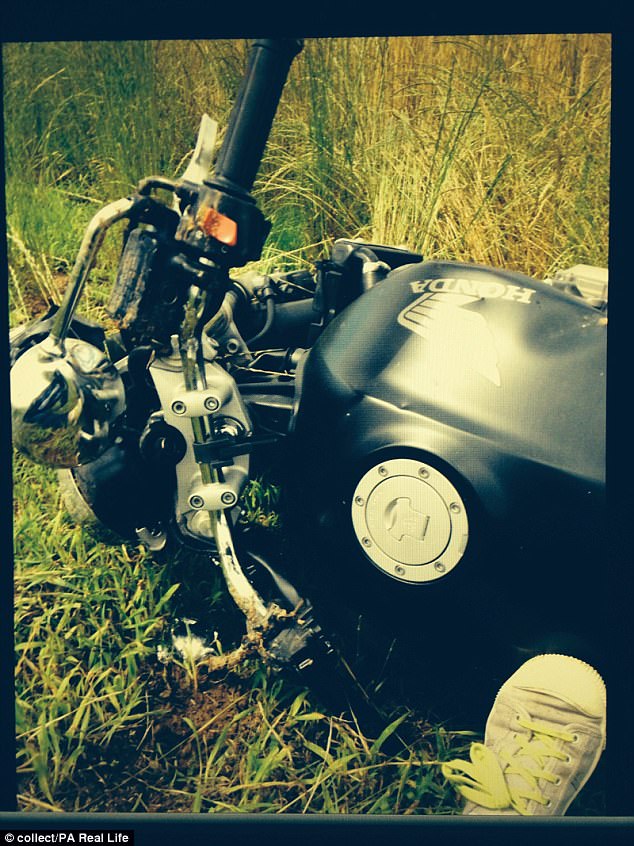 Ms Hufstedler was enjoying a Sunday ride on her Honda motorcycle when she stumbled off course and tumbled down an embankment.

She said: ‘I was on a back road only about 20 minutes from home, when I skidded on and woke up in a ditch.

‘I thought I’d broken my leg or something. I had a full helmet and biking gear on, which probably helped.’

In shock, Ms Hufstedler called her son Zac, 24, over the emergency services.

She said: ‘I shouldn’t have done it. I should have, of course, called the emergency services, but I was very rattled. I think I had concussion.’

At a walk-in clinic near her home, she was given four stitches and antibiotics.

Yet, a few days later, she was at home when her injured leg started to swell.

It also began turning black, which Ms Hufstedler did not initially notice.

She said: ‘I was wearing socks. If I had taken them off, I would have realised.’

The next morning her son’s girlfriend, Shelby Gilmore, 25, came to the house and found her unconscious.

Ms Hufstedler said: ‘She immediately realised there was something wrong.

‘I’d passed out carrying popcorn and there was a trail of it across the house. I’m such a clean freak, when she saw the popcorn, she realised something was up.’

Finding Ms Hufstedler out cold, Ms Gilmore called Zac, who managed to briefly rouse her, before she collapsed again in his arms.

Ms Hufstedler said: ‘When Zac got to the door, I passed out and he caught me.

‘He called the 911 emergency number and the medical team pretty much said I would not make it. I knew the doctor on call and he explained that I was already past the point of saving, but he was still going to do everything he could.’

Rushed to Conway Regional Hospital, a sample from her blackened foot was taken and her diagnosis confirmed.

She was then taken to the larger University of Arkansas Medical Sciences Hospital in Little Rock, where her family were told she would probably die.

Ms Hufstedler said: ‘It must have been terrifying for them. I was delirious, slipping in and out of consciousness, and I would wake occasionally to see Zac weeping.’