Armed police have swooped on a train station to arrest a man after he was seen with a ‘samurai sword.’

Officers tackled the 23-year-old man on a platform at Dartford Station, in Kent, at around 12.45pm today although no weapons were used.

There are no reports of any injuries and reports on social media suggest the blade was a samurai sword. 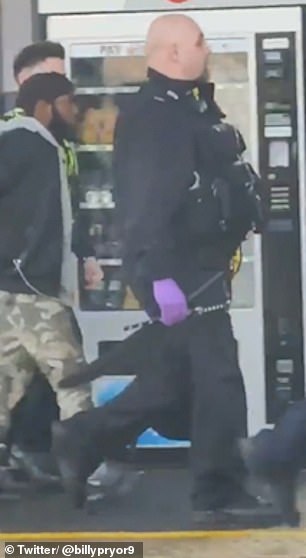 Armed officers arrested the 23-year-old man, left and right, at Dartford station after receiving reports of a person with a samurai sword. Pictured left an officer appears  hold a large blade

The man was first seen on a train and the alarm was raised. He was then detained at Dartford Station.

Eyewitness David Johnson posted pictures of the police on Twitter this afternoon with the caption: ‘Dartford platform as armed response to man on train with sword.’

Mike McEvoy tweeted: ‘He [the man] was spotted at Greenhithe but staff were not allowed to hold up the train according to what I heard.’

Video from the scene shows a man being escorted by police officers and a member of train staff.

One of the police officers can be seen holding a large blade and a backpack.

The 23-year-old man was arrested on suspicion of possession of an offensive weapon and is now in police custody. 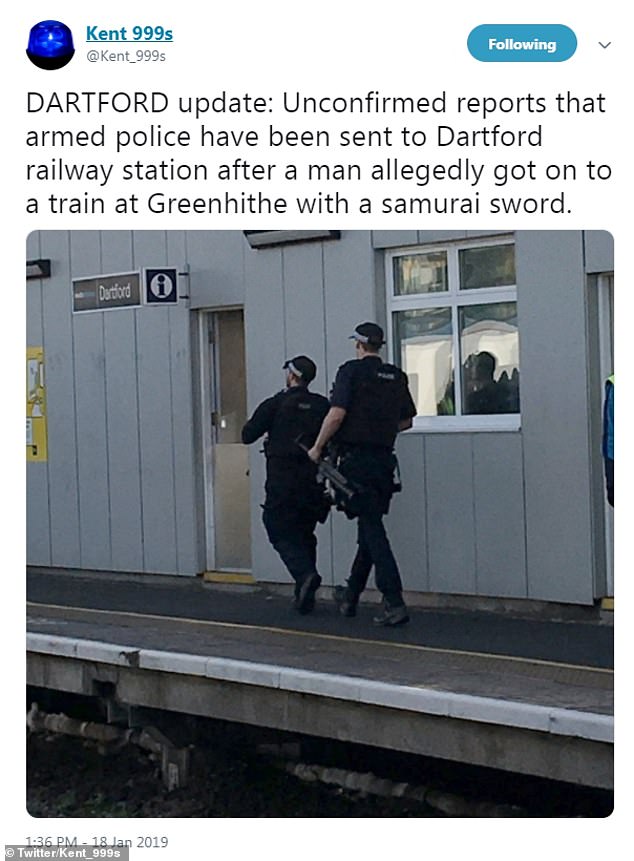 ‘Police officers were quickly on scene and detained a man on the platforms at the station.

‘A 23-year-old man was arrested on possession of an offensive weapon, he is being taken to custody. There are no reported injuries.

‘During the arrest a Taser device was drawn but not deployed.’

The incident is not currently thought to be terror-related.