Jack Grealish has been singled out for criticism by Arsene Wenger following Manchester City’s heartbreaking exit from the Champions League.

The £100million-man had almost put the game to bed in the dying minutes but then became the villain of the piece, according to the legendary former Arsenal manager.

Wenger told beIN SPORT: ‘When you look at 1-1, when Grealish is against Carvajal, he is passed easily, too easily. He must absolutely fight to stop that cross!

🗣️ “What is surprising for me, this team from Madrid when they need an answer… They find the solution.”

Arsène Wenger believes Real Madrid have “something special” following their victory against the odds!

‘You do not want the ball in the box, anything can happen when everybody goes forward.

‘That is where City did not secure the game, defending on the sides. Because they conceded, even when you look when Benzema gave the ball back, they didn’t really attack the ball the defenders, they made big mistakes.’

There were astonishing scenes at the Bernabeu late on and it had looked as though Pep Guardiola’s men were cruising into the final against Liverpool.

But Rodrygo poached a goal to make it 1-1 and then headed home in stoppage time just two minutes later to send the tie into extra time.

Karim Benzema then won and converted a penalty in the first period and Real killed the clock for the remaining minutes, with Fernandinho coming closest for City. 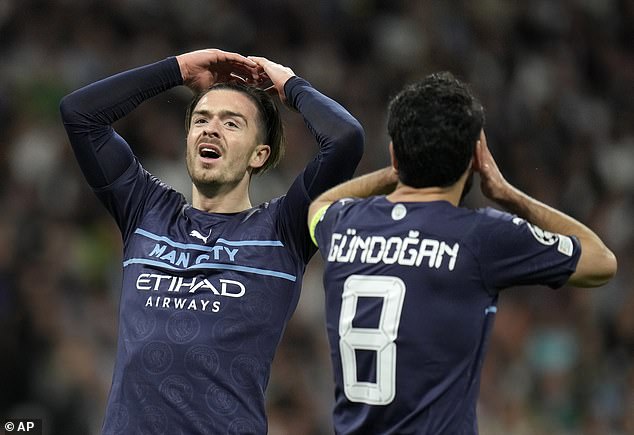 Grealish was beaten too easily by Dani Carvajal, according to the legendary Frenchman

Wenger is amazed by Real, who he says are a ‘special team’ under Carlo Ancelotti and somehow always seem to find a solution to the problems they are faced with.

He added: ‘When you’re a manager and you lose a game, you go home and always think, “what have I done wrong?”. The second thing I would say is that what is surprising for me is that this team from Madrid, when they need an answer to a problem, they always find a solution. 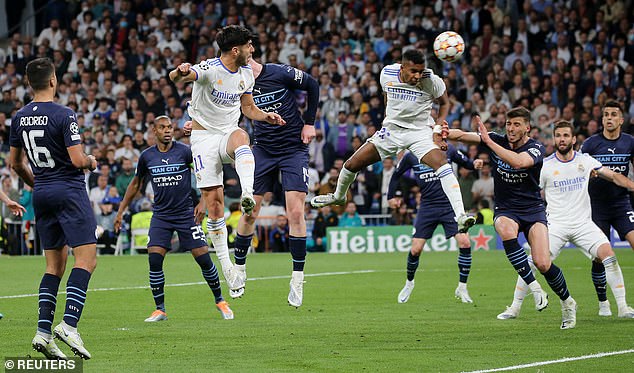 Real will face Liverpool in the final on May 28 in a repeat of the 2018 showdown, best remembered for Mo Salah’s injury and Loris Karius’ nightmare game in goal.

Salah has already been bullish about the game, saying he would rather face Real than City after Liverpool’s win over Villarreal in the other semi-final on Tuesday.

The Egyptian then tweeted on Wednesday night: ‘We have a score to settle.’

Paris plays host to the game between two of the greatest clubs in European football history in what should be a fitting finale to the season with Liverpool chasing an unprecedented quadruple.