The 31-year-old performer sported an eye-catching outfit while arriving at a showing of Everybody’s Talking About Jamie, which had its world premiere earlier this year.

The Pretty Little Liars star was joined by numerous other entertainment industry figures on the festival’s step-and-repeat photo op.

Basking in the spotlight: Ashley Benson was spotted spending time at a showing of Everybody’s Talking About Jamie at 2021 Outfest Los Angeles LGBTQ Film Festival in Los Angeles on Friday evening

Layered beneath was a black mesh bra, which coordinated with her semi-sheer tights.

The Spring Breakers actress completed the look with some high-waisted black shorts and some sky-high heels.

She accessorized with several articles of jewelry, including layered chain necklaces and various rings.

Her gorgeous brunette-to-blonde locks gracefully cascaded onto her shoulders and contrasted beautifully with the neutral tones of her outfit.

At one point, Benson was seen posing with Everybody’s Talking About Jamie’s star, Max Harwood.

The 23-year-old wore an eye-catching patterned blouse with puffed sleeves and a pair of matching  bellbottoms.

The actor’s blouse featured several buttons that ran up his chest – adding a bit of shine to his dual-toned look. 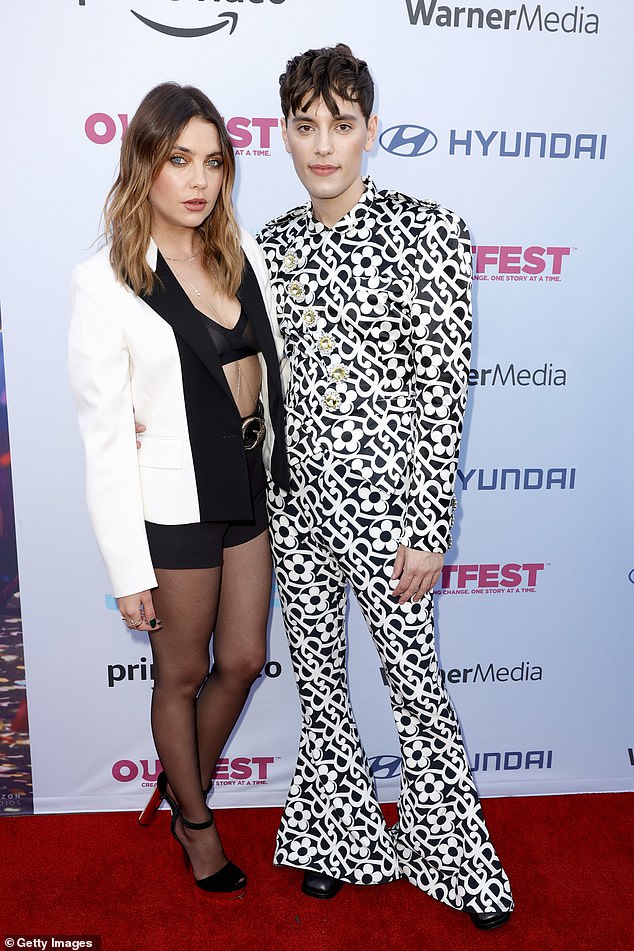 Hanging out: At one point, Benson was seen posing for a photo with the film’s star, Max Harwood 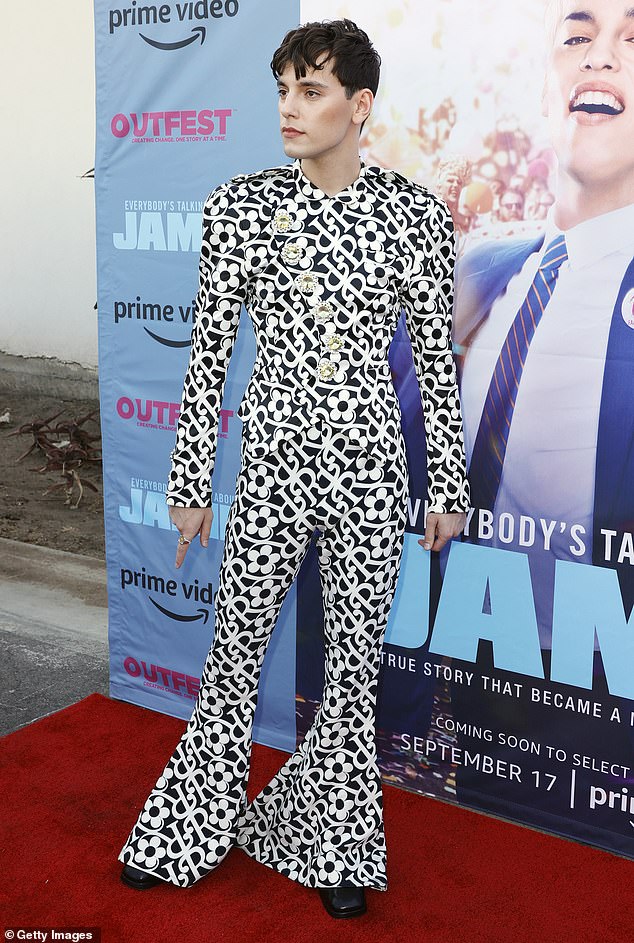 Eye-catching: The 23-year-old wore an eye-catching patterned blouse with puffed sleeves and a pair of matching bellbottoms

Harwood later posed for a photo with Jonathan Butterell, Lauren Patel and Bianca Del Rio as he made his way along the red carpet.

The 46-year-old drag performer showcased her toned legs in a floral-print mini dress.

Del Rio also sported a matching hairband that held her voluminous locks back while she posed for a few shots.

She modeled a pair of tinted sunglasses and strutted down the carpet in some beige high-heeled shoes. 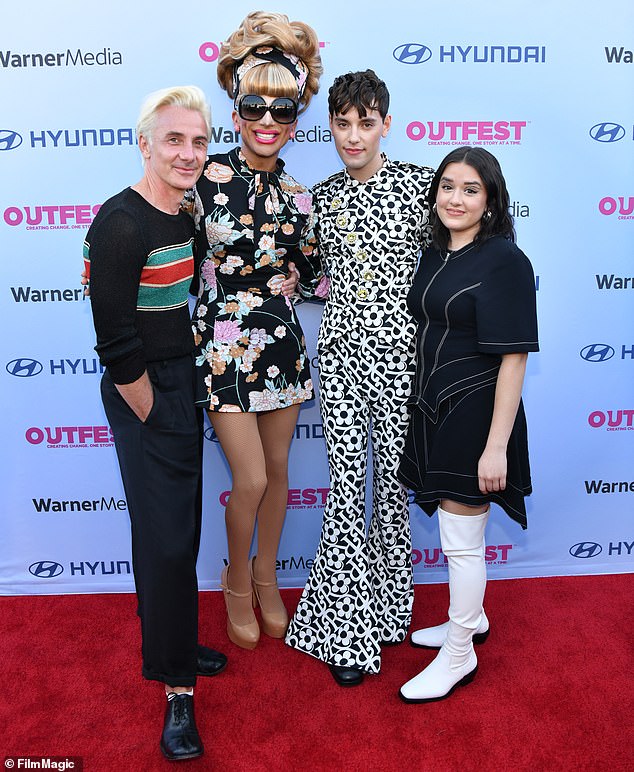 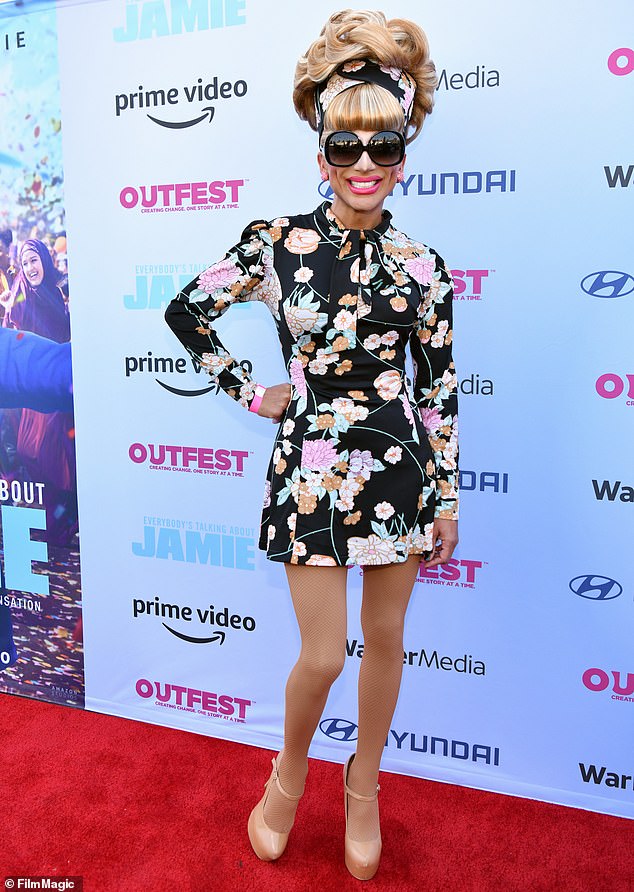 Looking good! Del Rio sported a floral-printed dress and a matching hairband while posing for a snap

Garrett Clayton made quite an appearance at the showing, as he wore a tattered pink t-shirt and a pair of matching platform boots.

The Disney Channel alum, 30, layered a leather jacket with yellow lining and a single patch over his purposely tattered top.

The Teen Beach Movie star completed the ensemble with a pair of black skinny jeans.

Evan Ross showcased his edgy aesthetic as he spent time on the event’s red carpet with wife Ashlee Simpson. 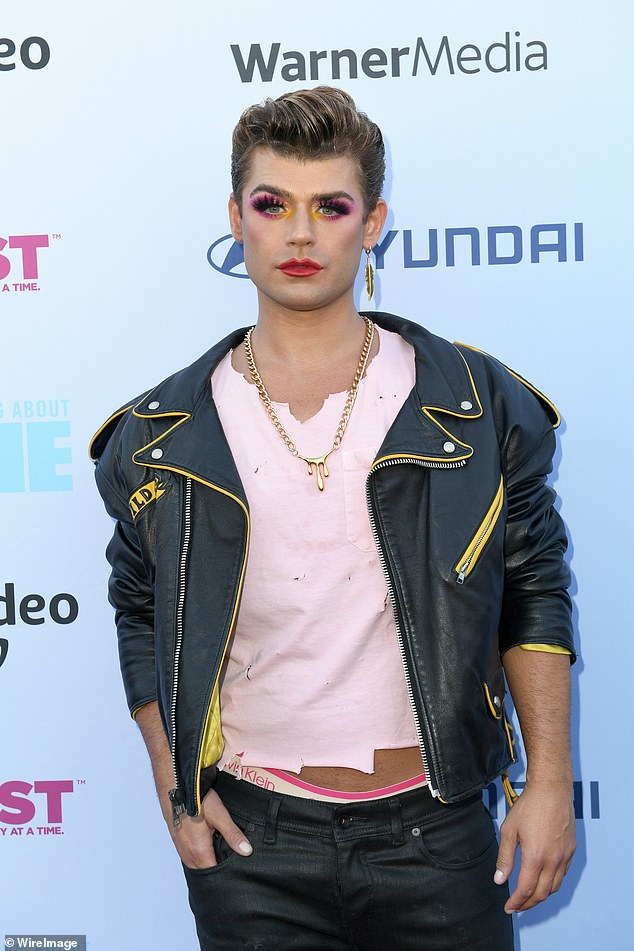 Wow! Garrett Clayton made quite an appearance at the showing, as he wore a tattered pink t-shirt layered beneath a leather jacket with yellow lining and a single patch

Striking a pose! Garrett strolled the carpet in a pair of pink and white platform heels 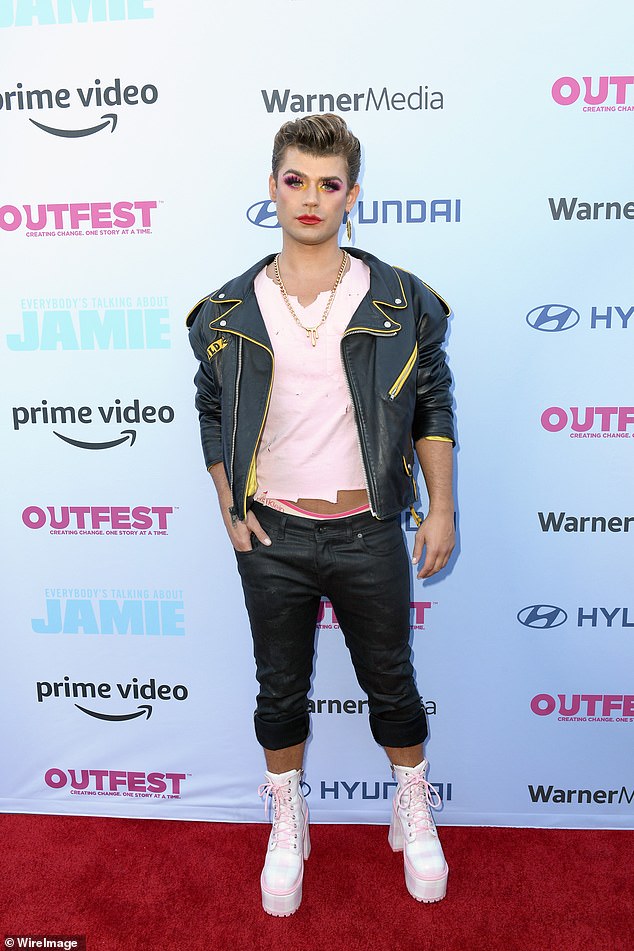 The 32-year-old actor threw on a roughed up motorcycle jacket that proved to be the perfect contrast to his plain blue t-shirt.

He finished off the ensemble with some high-water pants, as well as a set of leather shoes.

The 36-year-old singer’s gorgeous blonde hair flowed onto her shoulders in loose waves.

Rain Valdez kept it simple in a black sleeveless top that was paired with a wide-legged pair of high-waisted pink pants.

Edgy: Evan Ross showcased his edgy aesthetic as he spent time on the event’s red carpet with wife Ashlee Simpson 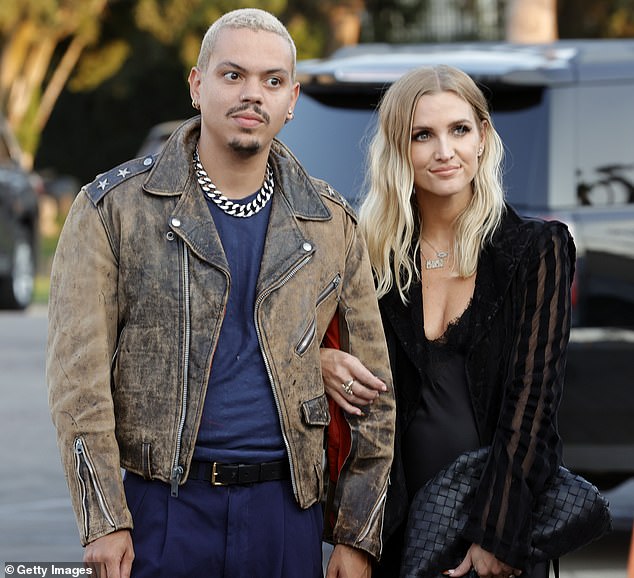 The actress wore a set of snakeskin shoes and carried a sizable purse.

Shaina Mikee Keiths rocked a leopard-printed top worn above a striped shirt as well as a black vest.

The drummer contrasted her tops with a pair of dual-shade jeans and a set of striped leather shoes and wore a blue-tinted pair of aviator-style sunglasses.

Kelen Coleman cut an eye-catching figure in a denim jumpsuit and brown boots. 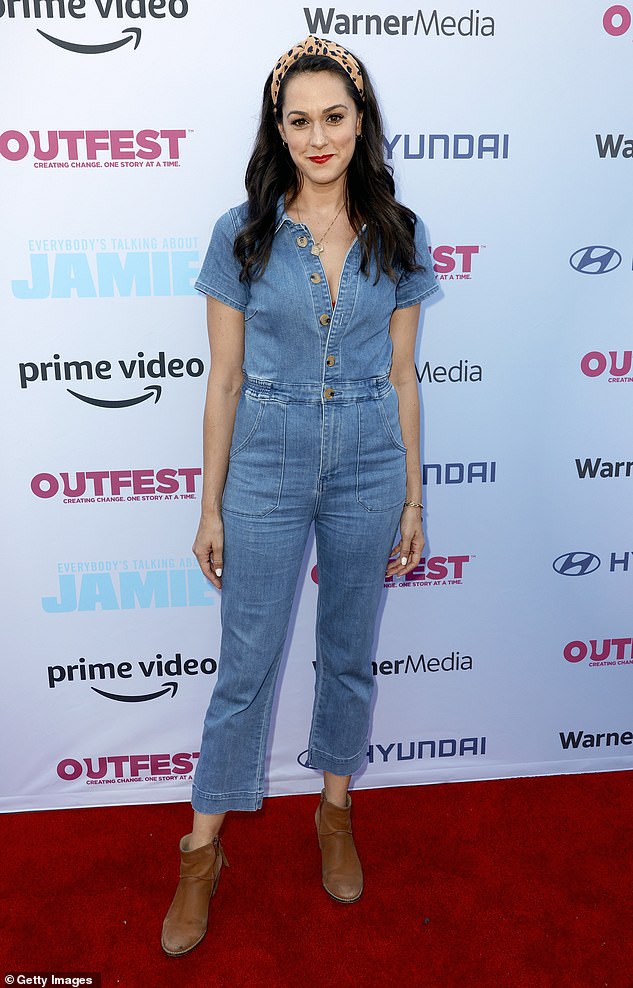 August Getty sported a partially ripped white t-shirt and a pearl necklace as he posed for a snap.

The designer, 27, also wore a light white long skirt and kept a brooch pinned to the upper left corner of his top on the red carpet.

Sherry Cola opted for a mainly black-and-white ensemble that consisted of a reflective shirt and a matching pair of pants that were contrasted by a bright t-shirt.

The actress contrasted the neutral tones of her outfit with a multicolored set of Nike sneakers.

Mary Mouser sported an intricately designed dress and a set of high-heeled shoes. 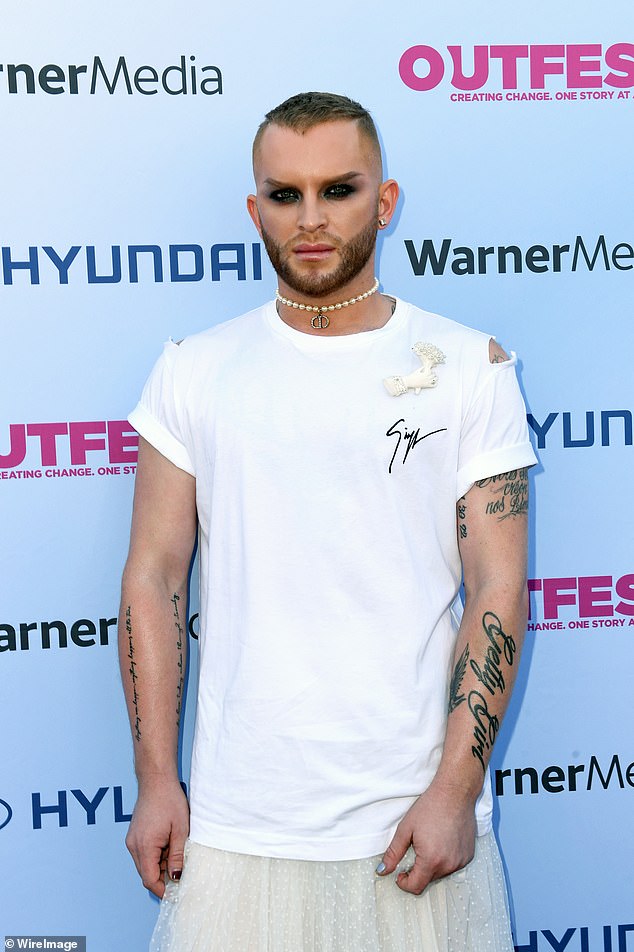 Doing his thing: August Getty wore a partially ripped t-shirt and a long skirt to the showing.

Keeping it consistent: Sherry Cola wore a mostly black-and-white outfit as she spent time on the red carpet. Mary Mouser donned a reflective and multicolored dress, as well as a pair of high-heeled shoes

The Cobra Kai actress, 25, kept her gorgeous brunette locks tied back for the duration of the showing.

Fawzia Mirza wore a denim jacket and a pair of olive-green cargo pants, while adding elements of brightness to her ensemble with a white shirt, yellow shoes, and orange-framed glasses.

Fin Argus sported a blue velour dress and kept a black jacket around his elbows.

The Agents of S.H.I.E.L.D. performer, 22, also wore fishnet leggings, leather boots and a bolo tie while making his way along the red carpet.

Tally T wore a sequined white sleeveless top that was paired with a fringed pink jacket as she posed for a shot.

The musician also wore a pair of blue jeans, high-heeled shoes and numerous articles of jewelry.

She also sported a pair of thigh-high heeled boots that matched the vibrant color of her top.

Her blonde hair was styled into a messy mohawk that contrasted beautifully with the rest of her clothing ensemble.

Turning heads: Fin Argus sported a blue velour dress that was complimented by a black jacket. Tally T wore a fringed pink jacket and a sequined white top as she spent time in front of the cameras 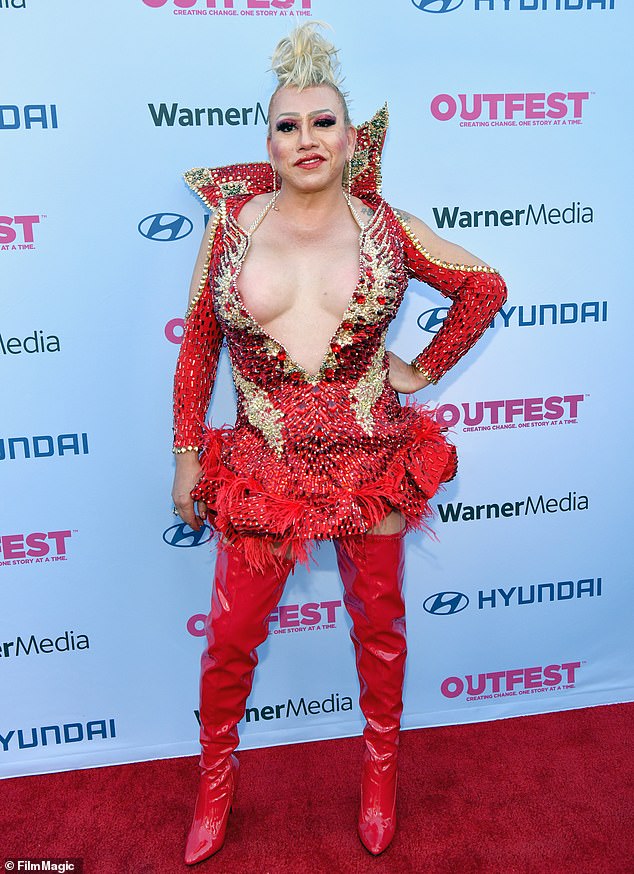