ASK THE GP: Is it safe to use mesh to repair my hernia? Dr Martin Scurr answers your questions

I would appreciate your views on the mesh used in hernia operations.

Hernia repair is one of the most common operations performed by the NHS. A hernia — protrusion of an internal structure or organ through its coverings — can occur in many parts of the body.

Did you know? Inguinal hernias present as a bulge in the groin area and become more obvious when coughing, straining or lifting

Inguinal hernias, where fatty tissue or part of the bowel pushes through a weak spot in muscles in the groin, like yours, are the most common, accounting for 70 per cent of all cases. The NHS spends £56 million treating this type of hernia each year.

Inguinal hernias present as a bulge in the groin area and become more obvious when coughing, straining or lifting.

They can be painful and, left untreated, there is a risk of strangulation, an acute emergency occurring when the contents of the hernia, usually the intestine, twist — meaning its blood supply is cut off, which can lead to gangrene.

Most hernia repairs involve synthetic mesh being inserted through a 10 cm incision in the groin to hold the previously bulging tissue in place.

Studies show that surgery using a mesh patch to repair the bulge (the most common option) has better results than non- mesh repairs — patients return faster to normal activities and have lower rates of persistent pain and recurrence.

If mesh is not used, the tissues are simply stitched together. 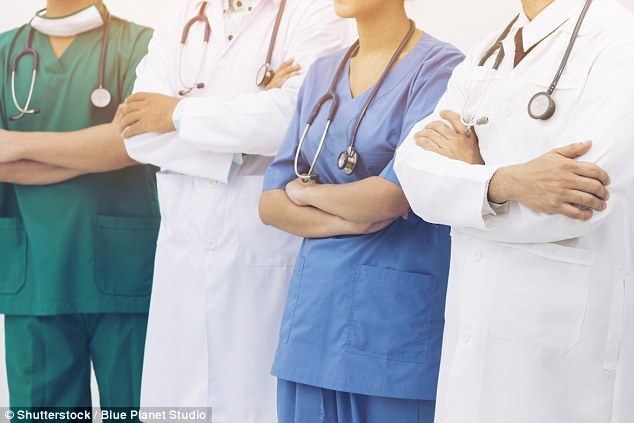 Treatment: Most hernia repairs involve synthetic mesh being inserted through a 10 cm incision in the groin to hold the previously bulging tissue in place

Neither method is perfect, hence the disagreement and controversy about which works best.

Mesh, positioned to allow healing once fibrous tissue forms over it, gives good strength to the repair.

The technique usually takes 30 to 45 minutes, is carried out under local anaesthetic and has been perfected over many years, with tens of thousands of operations. Recovery is rapid and the outcome is reliable.

The incidence of post-operative complications is low, but there have been reports of patients feeling pain after hernia surgery using mesh, which was only relieved when it was removed.

I have discussed this with David Nott, an eminent general surgeon in London, who has carried out operations to remove mesh after unsuccessful hernia operations (performed elsewhere) in perhaps 20 patients over several years.

In these patients, the body seems to react to the synthetic mesh. Why it reacts in this way to an inert material is uncertain.

I liken it to contact lenses: while most people rapidly tolerate them, some are never able to adapt.

Mesh for hernia repair surgery may be the same or similar to that which has caused such concern in the treatment of women with prolapse or continence problems.

But I am not sure a comparison can be made between procedures using mesh for gynaecological complaints in women and mesh repair for inguinal hernias.

The point must also be made that inguinal hernia repair using non-mesh techniques also has, along with a recurrence rate, a small incidence of continuing post-operative pain. I must reassure you that by far the greater probability is that you will have a good outcome. Indeed, facing the same problem, I had a repair to a double hernia using mesh with full confidence.

I’ve been told I have Baker’s cysts in my knees, which are making the backs of my legs quite painful, and that physiotherapy is the answer.

But it’s not working well — is there an alternative?

A Baker’s cyst, technically known as a popliteal cyst, is a swelling at the back of the knee and a common occurrence. They tend to occur in people between the ages of 35 and 70 and are a sign of a problem in the knee joint — typically osteoarthritis or damaged cartilage.

Baker’s cysts are not usually painful, however some patients experience discomfort behind the knee or knee stiffness, particularly with prolonged standing, and this may worsen with activity.

The swelling is a pouch of fluid — known as a bursa — which may change in size and tension as the knee joint moves.

It’s important to remember that the cysts are manifestations of whatever the problem is within the knee joint itself.

Cysts that are not causing any symptoms do not require further action, though finding out the cause through further examinations of the knee joint itself via X-rays or MRI scans should be considered.

Painful cysts can be aspirated — using a needle to withdraw the fluid — and, at the same time, a steroid known as a glucocorticoid can be injected into the joint, which will decrease the size of the cyst, as well as reduce discomfort and the likelihood of recurrence.

Treatment may fail if the accumulation of fluid in the knee, and, therefore, the cyst, is caused by a torn meniscus (the disc of cartilage in the knee) or significant arthritis, because as long as there is an internal problem — often known as an ‘internal derangement’ — the knee will go on protesting by pumping out fluid, which will accumulate. In that case, the next steps will be decided by your orthopaedic specialist.

In response to your specific question about physiotherapy, it will not ‘treat’ the cyst, but will have been prescribed to strengthen the leg muscles, to improve the support and function of the knee joint, as muscle wasting may well have occurred if the primary diagnosis is osteoarthritis of the knee joint or cartilage damage from a previous injury.

I’m sure your physiotherapist will have been briefed and will be able to enlighten you about what has triggered the cysts to form.

IN MY VIEW…I FEAR RATIONING WILL NEVER END

AS a medical student, I was concerned about the length of NHS waiting lists for surgery.

My father, then a consultant anaesthetist, explained that funding in the NHS (just 20 years old at the time) was limited and waiting lists were a method to ration expenditure.

The crowning glory of the NHS was the concept of free healthcare for all at the point of delivery but, with the population pushing at an open door, there would inevitably have to be a way of controlling and limiting demand in a tax-funded, but notionally free, service.

The debate about waiting lists soon became toxic, politically unacceptable, and more subtle ways of reducing demand and capping costs gradually evolved. In this game of musical chairs, the music has now stopped —though we see the sense of procedures being banned due to little evidence of benefit, such as injections for low back pain, surgery for carpal tunnel syndrome, arthroscopy for knee arthritis and removal of benign skin lesions, we now face the rationing of treatments that undoubtedly benefit patients.

Some have been permitted only to have one of two cataracts removed; others are declined funding for knee or hip replacement surgery.

And now, in some parts of the country, men are being told they can’t have vasectomies. We should be concerned about this creeping form of rationing. Where it will lead? How long before we are told that, at a certain age, NHS care is not worthwhile?

My fear is that, just as now there are those using an electric buggy, rather than walking again, because the NHS will not fund a knee or hip replacement, some older patients will in future remain chair or bedridden, rather than undergo heart surgery or other restorative treatment, as the NHS prioritises treatment of younger, more productive, tax-paying members of the population.

It raises the question: will some of us be expendable?