An auction house offering new consumer goods has seen a surge in popularity, as a new generation of younger bidders chases bargains going under the hammer online.

John Pye Auctions is one of the biggest auction houses in Britain and has seen tremendous growth in the past couple of years as interest in online bidding has increased, with the company offering 35,000 to 40,000 lots a week.

Among those heading to its auctions are first-time buyers and renters looking for big savings on kitting their homes out with new furniture, white goods and gadgets that can sometimes be bought for knock-down prices.

The company is different in that it has both bricks and mortar establishments as well as online lots – whereas most other firms have either one or the other.

Such auctions can result in savings of up to 75 per cent on new or shop-soiled furniture, white goods and gadgets.

But the main reason for the mammoth growth is not the size of the bargains – it is the shift from the traditional in-house bidding process to auctions being held online.

As auction houses enter the digital age, millennials and first-time buyers are increasingly taking an interest.

Sheldon Miller, John Pye’s business development manager, says that he believes auctions appeal to more people now than ever before and will only become more popular as time goes on.

He told This is Money: ‘We were the first UK general auction house to transition to live auctions to online, timed auctions.

‘When people think of auctions, they think of Christie’s on one end and a cattle market on the other but we are in the middle.’

There is often the presumption that only high ticket items are sold at auction but online auctions prove how diverse the selection of goods on offer can be.

Consumers can bid from everything from sportswear, cooking appliances, bathroom units and high-end clothing brands to watches, cars and jewellery. 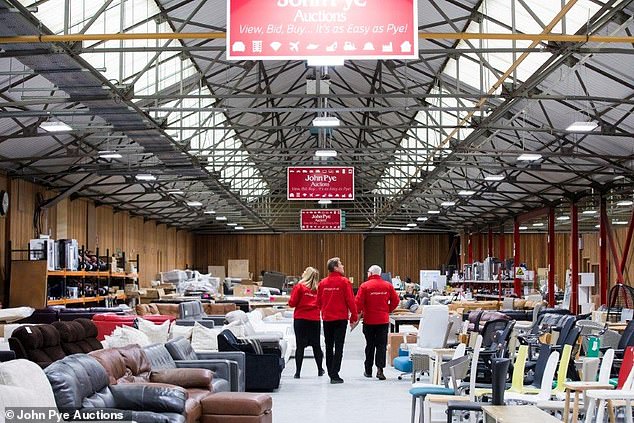 Grow: John Pye Auctions now have 23 sites across the UK, with 430 full time members of staff

As an indication of how popular the company is, it currently has a massive 400,000 registered bidders on its website with most being aged between 35 to 54 years old.

Although the interest has increased steadily over the past couple of years, it shot up dramatically within the last year when auction frequency significantly increased from 80 to over 1,000 a year.

Sheldon said: ‘Customers will really struggle to find the volume and variety of goods under one roof that we have, not just in the auction industry but in the whole retail industry.’

Most of the stock auctioned off at John Pye’s is from high street retail brands with Sheldon saying that 80 per cent of the top 50 UK retailers now sell stock at their auction houses, including household names John Lewis and Made.com.

How does the stock end up at an auction?

Sheldon said: ‘It all falls under the overarching umbrella of surplus stock and under that, it is broken down into different elements.

‘For example, some of the things sold are end of line clearances whilst others are write-off stock from insurance companies.

‘There has also been a massive movement in online retail which means there are lots of failed deliveries and packaging damage, whether that is by the courier or warehouse, which then end up with us.

‘Some products are often beyond resale and others are fine. Some just need a wash and they come up like new.’

Much of the stock that ends up in the auction room comes from store clearances, for example, John Pye cleared out all the Phones4U stores across the country after the company went into administration.

Within three days, it collected over 3,900 Phones4U boxes of stock valued at £3.5million.

It also has a central government contract that means they auction off seized vehicles, selling 30,000 a year, as well as a business assets department which means if there is any personal insolvency, it can sell assets to raise money for creditors. 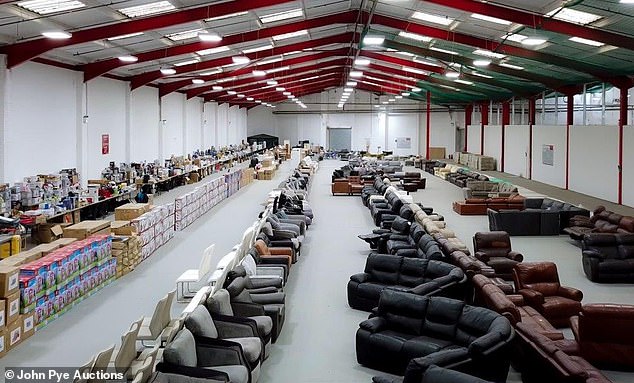 While the success of eBay is sure to have helped, what does Sheldon think is the reason that online auctions have taken off in the way they have?

‘People always a want a bargain, any time, whether the economy is good or bad. Generally, if you offer the same product to somebody at 50 per cent off of the retail price option, they’re going to take it.

‘There is also the surprise element as stock will be different from one week to the next.’

Keeping up with modern technology is crucial to the success of online auctions as more and more people use their phones for purchasing products.

Sheldon said: ’60 per cent of our customers are mobile based now so our audience is only going to get bigger. Window shopping is now done on the internet as people are no longer browsing on the High Street.

Auctioneers stand to make a tidy profit from holding the lots as they charge both a buyers premium and VAT.

These can vary slightly between auction houses and auction asset markets. 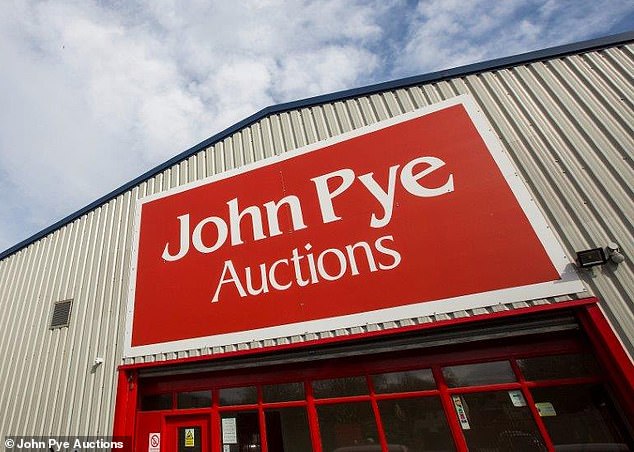 John Pye sells stock that come from a variety of sources, including from end of line stock

While online auctions make it much easier for the customer to make bids, the firm still doesn’t offer delivery on the items, although this is set to change in August of this year.

Buyers instead have to pick up the paid for item or organise a courier to collect their purchases.

Sheldon does think people need to be careful when bidding in their first online auction and suggests customers see the product before putting any money down.

‘If you have any doubts of the suitability of any items, we strongly advise you not to bid on it. There is a reason that some products are unused in their packaging whilst others are damaged.’

All goods are sold as seen so bidding on something customers haven’t seen is possible but not advised.

He added: ‘People can touch and inspect products which keeps with the theme of being traditionally bricks and mortar but it’s a hybrid system as we take the best of old traditional methods and the best of the new.’

The firm has grown faster than any other European auction business in the last seven years, expanding from just one site to 23 and growing from 80 full-time staff members to over 430.

What other online auctioneers are there?

John Pye is unique in that it continues both bricks and mortar auctions houses as well as online bidding.

However, more online auctioneers are taking advantage of modern technology and allowing users to bid for their goods online.

The Saleroom: The Saleroom is an online auction site that specialises in fine art and antiques auctions.

Users can search or browse through catalogues to find unique items and place bids over the internet in real time.

A number of different auction houses from across the country use The Saleroom to showcase their lots, widening the amount of people that can view their auctions and allow members of the public from around the UK to bid.

Easylive: Easylive is another online auction site that lets users bid in real-time in real auctions across the UK and Ireland.

Different auction houses are able to post lots on to the site and some broadcast live auctions users can watch and bid along with.

The website holds three types of auction: ones that are broadcast live, lots that can be bid on at any point until the end of the auction and auctions that aren’t live and absentee bids can be made on.

LiveAuctioneers: This site holds auctions from over 50 countries across the world online, translating all lots to the user’s language and currency – making it easy for anyone to use.

All bidding takes place via a secure bidder network, which keeps user’s maximum bids for upcoming sales private until the item is opened on the day of the sale.