Australia is fighting to stop up to 10 Pacific island nations signing security deals with China after the Solomon Islands’ controversial pact with Beijing.

Chinese Foreign Minister Wang Yi landed in the Solomon Islands this week to commence a 10-day tour of the Pacific, where he is pushing a regional security deal on behalf of his government.

During the trip, which includes visits to PNG, Kiribati, Samoa, Fiji, Tonga, Vanuatu, and East Timor, Wang has been spruiking the potential for China to provide high-level police training and security and data co-operation across the region.

The excursion proved fruitful, with Samoa on Tuesday announcing it struck three agreements with China including one featuring ‘economic and technical co-operation’, The Age reports.

In response, Australia is racing to strengthen its relations with Pacific neighbours amid fears China may secure a massive military foothold within the region if further alliances are forged.

On Friday, Australia’s new foreign affairs minister, Penny Wong, touched down in Fiji where she pleaded with Pacific nations to consider the ‘consequences’ of accepting security offers from Beijing.

Meanwhile, more than 100 Australian Defence Force personnel will be sent to Papua New Guinea in coming months to help the country with its national election in July.

The nation had election troubles in the past, including violent clashes and concerns of rigged results.

The Defence Department said Australia would support the campaign at the request of the PNG Government by supplying air force, army and cyber personnel.

They will assist with logistics and planning, including air lifts to help distribute and collect votes.

Australia has also sent about 90 troops to PNG since March to take part in joint military activities, with more to be deployed in coming months to help with infantry skills and operations.

In another recently signed agreement, Australia pledged to help the country better detect and fight cyber attacks by sharing information and assisting in the training of PNG cyber experts. 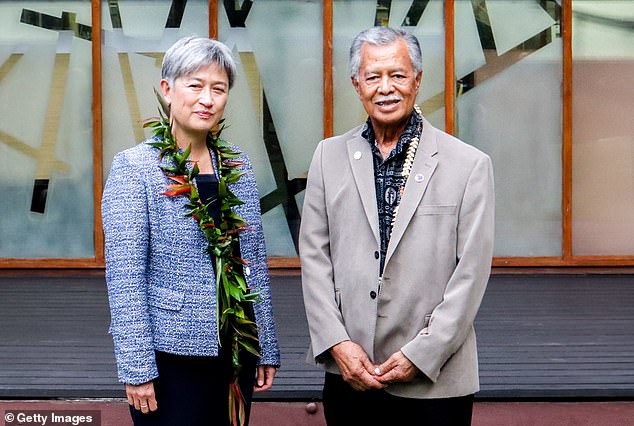 Australian Foreign Minister Penny Wong meets with Henry Puna, the Secretary General of the Pacific Island Forum, on May 26, in Suva, Fiji

The Foreign Affairs Department said the ‘number, type and sophistication’ of cybersecurity threats to Australia and the region was rising.

‘A variety of cyber-enabled means such as cybersecurity incidents and misinformation or disinformation campaigns can represent potential threats,’ it said.

‘We must engage internationally to advance and protect our shared interests.’

Mr Wang on Friday warned the US and Australian attempts to prevent China’s security plans for the pacific were ‘doomed to failure’.

Speaking in Fiji on the same day, Senator Wong implored the country to refrain from forming ties with China.

‘We want to be a partner of choice and demonstrate to your nation and other nations in the region that we are a partner who can be trusted and reliable, and historically we have been,’ she told reporters on Friday.

‘We have expressed our concerns publicly about the security agreement between the Solomon Islands and China and the reason why is because we have, as do other Pacific nations, we think there are consequences.’ 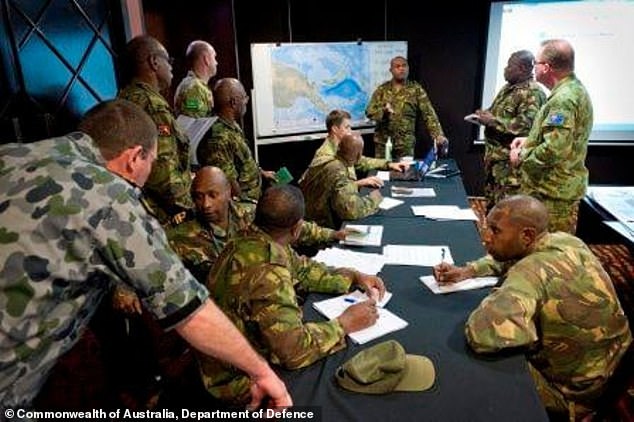 However, Senator Wong said the visit from the Chinese minister did not influence Australia’s decision to visit Fiji in the wake of Labor’s election victory.

‘I was very keen to come to the Pacific as soon as I became foreign minister, this is my first bilateral visit,’ she said.

Earlier in the visit, Senator Wong used a speech to stress Australia was listening to the concerns of Pacific nations, particularly on climate change.

The foreign minister said there had been a lost decade on climate change action under the previous coalition government and she was determined to make up for it.

Senator Wong said the major security decisions in the region needed to be decided by countries in the area. 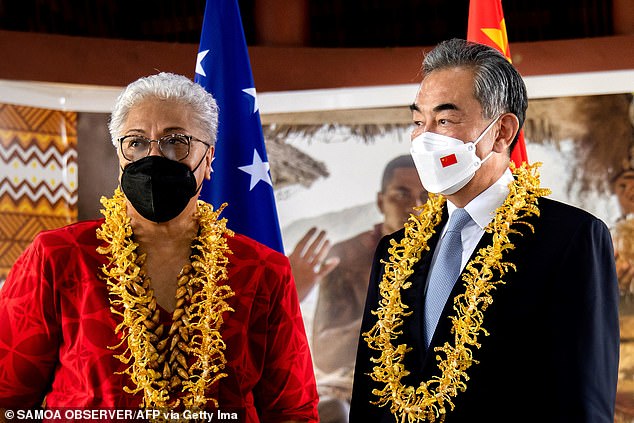 ‘It is for Pacific nations to make their own decisions about who they want to partner with and in which areas, and we respect that,’ she said.

‘We want to work with you on your priorities and as part of the Pacific family.’

Concerns about China’s influence in the region have been growing since Beijing signed a security pact with Honiara in April.

There are fears the alliance will enable China to build a military base in the Pacific,  less than 2,000km from Australia’s east coast.

Both Solomon Islands and Chinese governments have denied plans for a base to be built, with Mr Wang reiterating the claims again this week.

‘[The deal is] above board, with honesty and integrity,’ he told a news conference after meeting with Solomon Islands Foreign Minister, Jeremiah Manele.

‘It is not imposed on anyone, nor is it targeted at any third party.’