‘It’s discrimination against something so minor’: Australian soldiers facing the sack for growing beards say the Army needs to ‘change with the times’

Two Australian soldiers who served their country for more than a decade each could be sacked for having something as minor as facial hair.

The men from Townsville have been unshaven for five years due to skin irritations after being forced to wash in dirty and unhygienic conditions while deployed.

The board of the Australian Defence Department is now deciding if the soldier’s beards should end their service.

Both soldiers were recommended by medical authorities to grow beards after experiencing skin conditions.

One of the soldiers developed a condition known as foliculitis, where the hair follicles become inflamed.

He claims having no access to clean water, yet still being made to shave everyday, resulted in his skin problems.

He believes they are being unfairly targeted over something that does not impact their job.

‘Over the last two years it’s set my career back a fair bit. I’ve lost experience, I’ve lost promotion courses and have just been ­confined to barracks,’ one of the soldiers who has served for 14 years told the Townsville Bulletin.

‘It’s discrimination for something so minor.’ 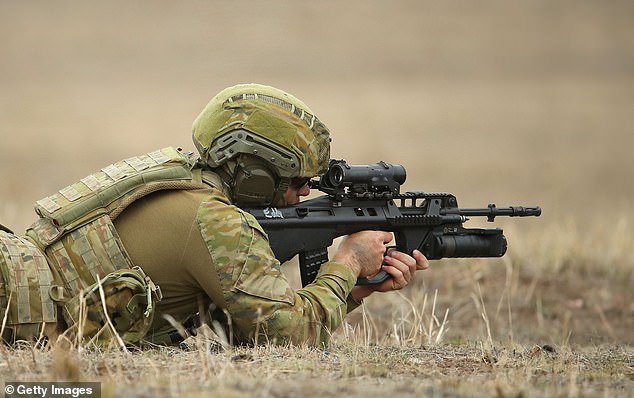 ‘It’s discrimination for something so minor,’ one of the soldiers said

The strict treatment of facial hair came after Chief of Army Lieutenant General, Angus Campbell, sent an email, warning soldiers with facial hair that they could be discharged, as it was not part of tradition.

The letter was sent in 2016 after the two soldiers already had their beards for close to three years.

‘It’s so stressful. There is absolutely no job ­security,’ another soldier said.

The Department of Defence said soldiers with medical reasons for having facial hair will be considered by the Medical Employment Classification Review Board.