An Australian woman who lost both her legs in a horrific subway accident has spoken her first words since being taken off life support.

Visaya Hoffie remains in intensive care after she was run over by a New York City subway train earlier this month when she tripped and fell onto the tracks.

The Brisbane artist suffered multiple head wounds, fractures to her vertebrae and vertebral artery, cuts and has had both of her lower legs amputated.

Ms Hoffie has since been taken off breathing support and has said her first words since undergoing multiple surgeries, her mother has revealed.

Pat Hoffie, an art professor, updated friends and family saying her daughter was in good spirits and has begun eating again.

‘Visaya is now off breathing support, and has started to eat. She is sedated but is optimistic and has already muttered, “I’m going to have to deal with this”, Mrs Hoffie  said. 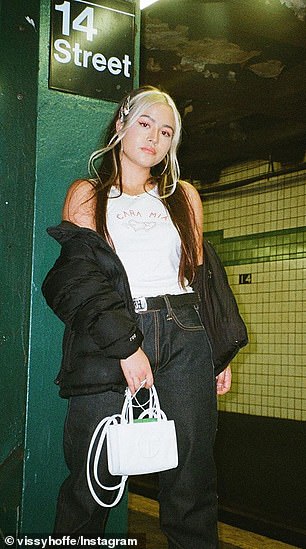 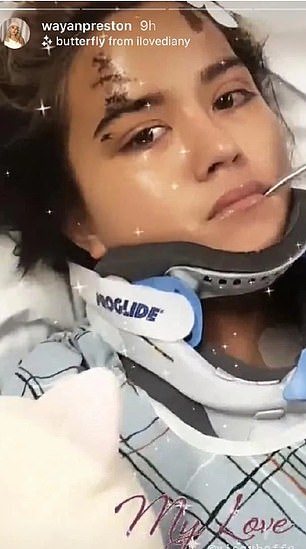 ‘The process of recovery will be very slow and we will probably be here a long time.

‘Thank you to those of you who are already sustaining her by your prayers and good wishes.’

Ms Hoffie was due for another surgery earlier this week for ‘corrective amputation’ on her left leg and has suffered a pseudoaneurysm, also known as a ‘false aneurysm’ to her femoral artery, which occurs when the vessel is penetrated and begins to bleed.

The injury is being monitored by a neck brace, which Visaya will have to wear for ‘many months to come’, her mum said. The young woman has also received a row of staples to her skull.

Mrs Hoffie remains alongside her daughter with her brother and Visaya’s friend Wayan, who had shared photos on social media of the two in New York City days earlier.

The mum also issued a heartfelt post thanking friends and family for the support. 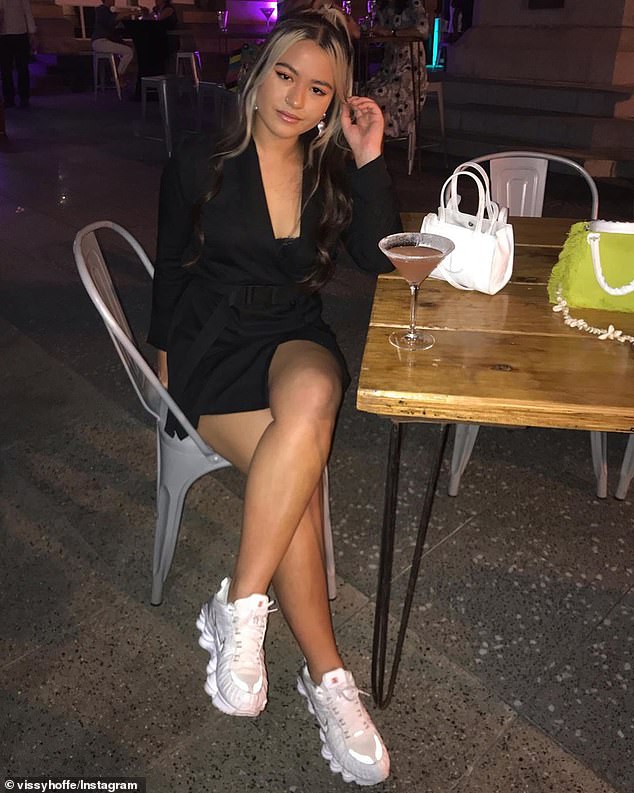 Visaya’s work was showcased at the Queensland College of Fine Art’s graduates collection in 2016, under the name Visaya Bose. Her mother Pat and late father Santiage Bose were both well-known in Brisbane’s art scene 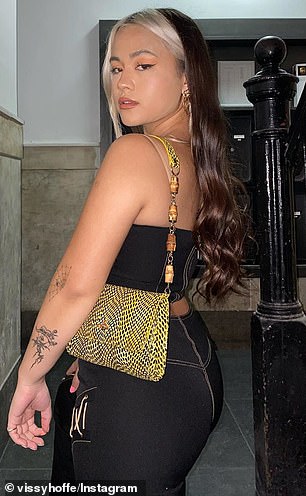 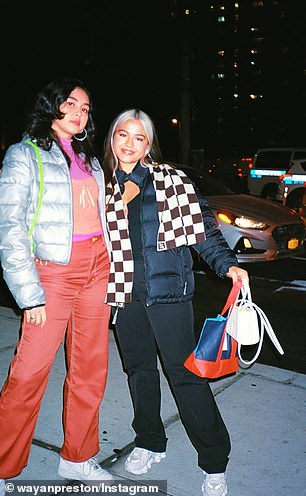 ‘From the depths of our hearts, thank you for your online support. One of the nurses in ICU said to me, “A lone wolf dies in the winter. In times like this, keep with your pack”.

‘And it’s been true – the support and love from each of you surrounds Visaya (and myself) with increased strength –deep gratitude to each one who has written expressing support and love.’

Ms Hoffie, who was reportedly visiting a friend from Brisbane, was struck by seven carriages on January 11 and left unconscious on the tracks for about 20 minutes.

She avoided being hit again by a second oncoming train when the driver caught sight of her bright pink top and slammed on the brakes.

‘It’s difficult at the moment,’ Mrs Hoffie told The Courier Mail earlier this week from a New York City hospital.

‘But we are in the best possible medical home but we just have to put our heads together and work through it.

‘We’re in the middle of a very trying time.’

Mrs Hoffie shared a photo of Visaya taken just moments before the horrific incident wearing the pink top that essentially saved her life.

‘This image of her [Visaya] was taken hours before the accident,’ she wrote. 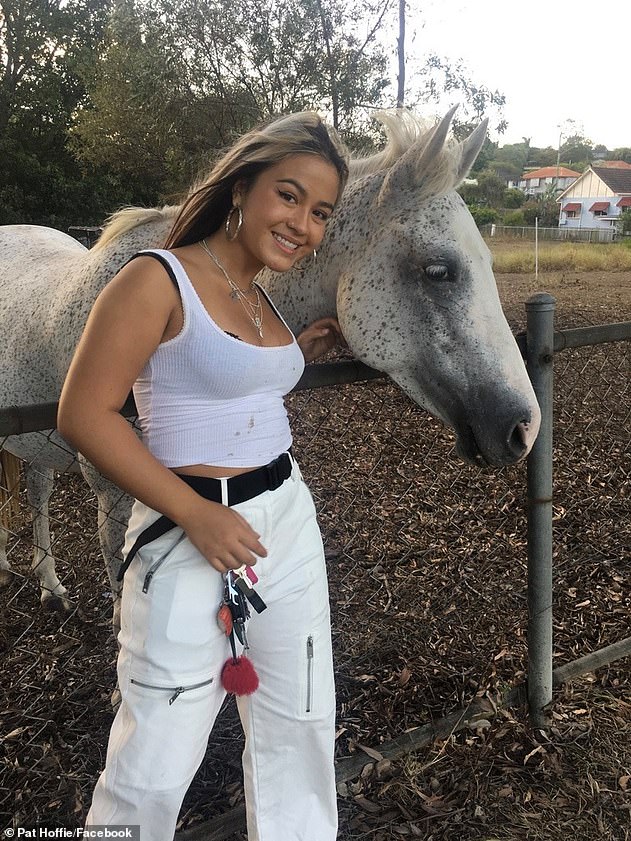 On Wednesday, Visaya underwent further ‘corrective amputation’ on her left leg and is taking aspirin to avoid the risk of blood clotting

‘The bright pink colour of her top is what alerted the engine driver of the second train to the fact that someone was lying across the track.

‘When the first train had rolled across her unconscious body twenty minutes earlier, her black puffy jacket and black jeans had made her invisible to the driver.

‘In the words of the investigating police, ‘it’s a miracle she survived.’ Please pray that she continues to survive and to heal and to come home.’

Visaya’s work was showcased at the Queensland College of Fine Art’s graduates collection in 2016, under the name Visaya Bose.

Her mother Pat and late father Santiage Bose were both well-known in Brisbane’s art scene.

The Department of Foreign Affairs and Trade confirmed in a statement they were providing consular assistance to an Australian woman in the United States. 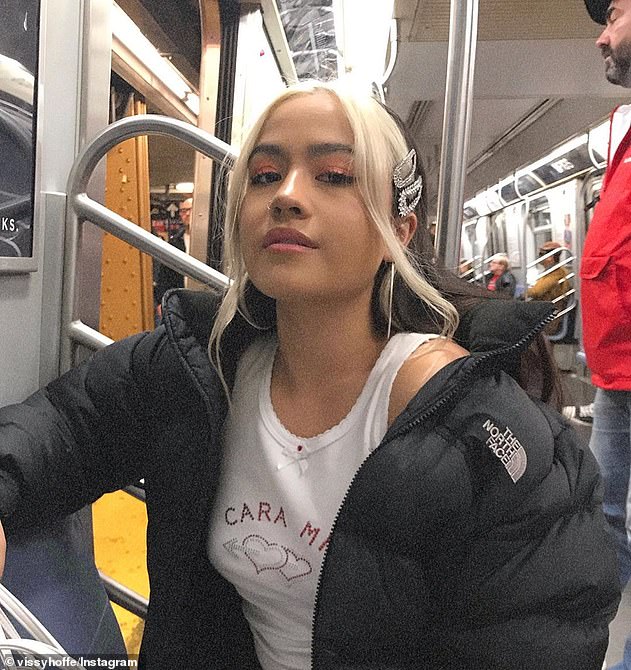