Australians warned to get a Covid booster shot immediately

People in NSW are being urged to maintain COVID-safe protocols and get a vaccine booster as soon as possible, as the number of confirmed cases of the Omicron variant hits eight in Australia.

Health Minister Brad Hazzard said 500 previously tested swabs of travellers who had returned to NSW since November 22 had been lab tested to ensure they did not contain the Omicron strain.

None of them proved to be the new variant but one requires further investigation.

All of the 271 cases recorded in NSW in the 24-hours until 8pm on Wednesday were the Delta strain.

While the spotlight was on the Omicron strain, people needed to remember Delta was still circulating and everyone should be cautious.

‘We know this virus is dangerous, it does come out in some different forms,’ Mr Hazzard told reporters on Thursday.

The jury is still out on whether the latest strain is more dangerous and could overwhelm hospitals, or merely be more transmissible and able to replace stronger variants.

Health NSW said at least two people with the Omicron variant have been in the community because they landed in Australia before quarantine rules changed on Saturday.

A woman in her 30s from the Central Coast and a man in his 40s from Cabramatta in Sydney’s southwest, are both infected with Omicron and arrived on the same Qatar Airways flight from Doha a week ago.

Mr Hazzard said the Cabramatta community was on high alert but stressed the infected man had only visited one shop on Monday.

‘There have been no further indications of transmission in that area,’ he said.

‘It is still wise for us all if we have any symptoms whatsoever, whether it is Cabramatta, wherever it is, if you have symptoms don’t forget the basic rule to go and get tested.’ 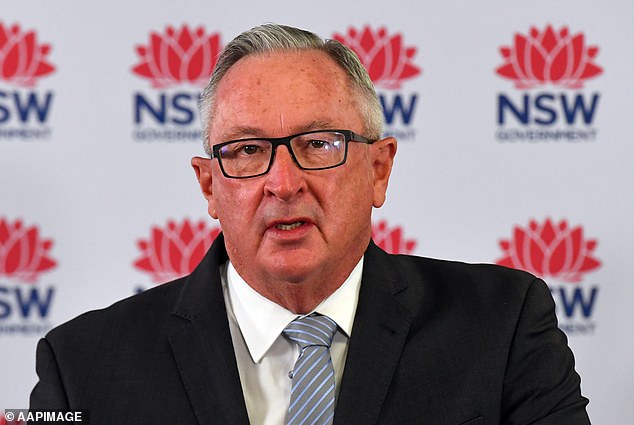 He also urged anyone who received their last vaccination six months ago to get a booster shot as soon as possible, saying there had been a 40 per cent increase in the uptake since last week.

He said he would welcome any decision by The Australian Technical Advisory Group on Immunisation to approve vaccines for children aged five-to-11.

‘There is no question that if we could get to those younger people it would make the community a lot safer,’ Mr Hazzard said.

NSW recorded no deaths on Wednesday while 81,877 people were tested.

It is two weeks before more restrictions are lifted NSW, and the unvaccinated will be able to return to hospitality venues and all shops.

There are 144 people in hospital, including 24 in ICU and 10 ventilated.

Restrictions are due to lift in NSW on December 15 and it’s unlikely the emergence of the Omicron variant will derail that plan.

That’s when density limits will be scrapped, QR check-ins will only be required at high-risk venues and masks will only have to be worn on public transport, at airports and on planes.

Front-of-house hospitality staff working indoors who are not fully vaccinated must also continue to wear masks.

People who get a booster Pfizer Covid vaccine or who had their second jab within six months should still be highly protected against Omicron, Israeli health chiefs claim.

Without citing any data, Health minister Nitzan Horowitz yesterday said there was ‘room for optimism’ and that existing vaccines will shield against severe illness from the super-strain, based on ‘initial indications’.

Hours later, a report by an Israeli news channel claimed the Pfizer jab was 90 per cent effective at preventing symptomatic infection from Omicron, only slightly less than Delta.

The Channel 12 news broadcast also claimed the super variant is just 30 per cent more infectious than Delta — much lower than initially feared.

For comparison, Delta is 70 per cent more infectious than the Alpha strain, which it outpaced earlier this year.

The comments come after the co-founder of BioNTech – which developed the Pfizer jab – said he was confident it would hold up against Omicron.