Author Jane Fallon on being independently successful, despite being partner to Ricky Gervais

‘I’ve always been very clear: I never want to be known just as somebody’s girlfriend,’ says Jane Fallon, the television executive turned novelist who was a success at work long before anyone had ever heard of the man she happens to live with. ‘I think he was still playing in bands and cleaning floors at the university when I got started.’

She grins, because the name of this failed pop star is Ricky Gervais, one of the most popular comedians in the world, host of the Golden Globes and star of The Office and Extras as well as movies such as Night At The Museum. They met 36 years ago when both were students, and spent a miserable time after university living in a dingy bedsit above a brothel in King’s Cross. It was Fallon who lifted the pair out of poverty first, by landing a career as a script editor and then producer on TV shows such as EastEnders, This Life and Teachers.

Jane Fallon, the television executive turned novelist, was a success at work long before anyone had ever heard of the man she happens to live with

‘I have always had a bee in my bonnet about being seen to do things for myself,’ she says. ‘It comes from growing up in a big family as someone who is shy and quiet but who knows she’s got a brain in there. It’s important that people know I’m achieving things in my own right, as opposed to being someone’s other half.’

And that’s why Fallon refused to capitalise on her partner’s name when she gave up a high-flying job in television to risk going it alone as a novelist in 2007, even though he was in the first flush of fame and it would have been great for publicity. ‘As far as I’m aware, the publisher Penguin didn’t know when I was pitching my first novel, Getting Rid Of Matthew. And once I was signed, I was very clear that it was never going to be in my press releases.’

Fallon has published eight best-sellers since then, each of them warm, witty and featuring strong female characters. She’ll soon release another, Tell Me A Secret.

‘I wanted to write about relationships – the mess, the intricacy and the horrible ways people treat each other,’ says Fallon, 58.

Is that hard when you’ve been with the same person for so long? ‘Working in television helped because I’d spent years coming up with ridiculous stories for EastEnders. You also become fascinated about what’s going on with other people’s lives. I think it makes you a good listener about other people’s relationships when you haven’t got that much to say about your own.’

Today Fallon is an acclaimed writer who seems very happy in her own skin, so she is finally prepared to shed light on her private life in Hampstead, where there is a £10.8 million mansion to go with a home in Buckinghamshire and an apartment in New York.

‘If I’m walking down the street on my own, it’s rare that I get noticed, so I can slob around and nobody notices. But if we go out for lunch, people look at Ricky then they’ll look to see who he’s with and I feel really self-conscious in my sweat pants.’ Fallon is dressed smartly today in black jeans and a white blouse. She looks sparky and much younger than her years. ‘Sometimes it makes you retreat inside yourself because you think: People are listening in on our conversations. Or even recording us on their phones. Or taking photos. It can make you incredibly self-conscious.’

Fallon spends nine months a year writing and editing a novel. ‘If I’m up against it I’ll get up at five o’clock and put in four hours, before Ricky’s up or anyone’s calling me. That’s when my brain works best. As the day goes on, I get more and more sluggish and dozy.’

By early evening she likes to be on the sofa with her cat Ollie and her partner, watching a box set with supper. Judging by the number of tweets he puts out around that time of day, Gervais must have his face in his phone all the time.

‘Yeah! But then probably so have I. In between episodes there’s a lot of fiddling with our phones. I don’t do it in the bath like he does. Mostly out of fear of dropping the phone in the water.’

Fallon has nearly 50,000 followers; Gervais has 13 million. Is there any rivalry? Fallon snorts with laughter. ‘My cat’s got more than me!’ It’s true: the account she runs for her Siamese, myleftfang, is several thousand followers ahead on the day we meet.

Fallon and Gervais support a number of charities, such as Nowzad, which works with animals and vets in Afghanistan, so does she feel an obligation to do something with her wealth?

‘Of course. Most people would if they had the money. Paying taxes is very important. It really does my head in when people don’t pay their tax, going off to live in tax havens or whatever. We all grew up with the NHS.’

She has some sympathy for people such as Jimmy Carr, who have put their money into tax-avoidance schemes and then been told they’re wrong.

We couldn’t work together, we’re both control freaks. We both want our way too much

‘There are those who have been caught out, and I think we shouldn’t be too harsh. Their accountants have told them they’re doing something that’s fine. Who’s to know?’

Gervais alone is said to be worth £65 million, so now that she writes bestsellers surely they are awash with money?

‘Not awash, but compared to anything we thought we’d have it is ridiculous. You have to not think about it too much. We don’t spend a lot. We don’t have a car. We spend money on where we live. It’s obviously a blessing but it’s also strange.’

Television gave Fallon a chance to work with stories, but now she turns the tables brilliantly in her new novel, set in the production office of a popular soap loosely based on EastEnders. Best friends and colleagues Holly and Roz tell each other everything, until one gets the chance of promotion. Suddenly they’re at war.

‘Two women working for me years ago both applied for a job. One was very open and talked about it all the time. They spent hours together discussing an idea for a storyline for the application, but the other woman never said that she’d applied for the job too. 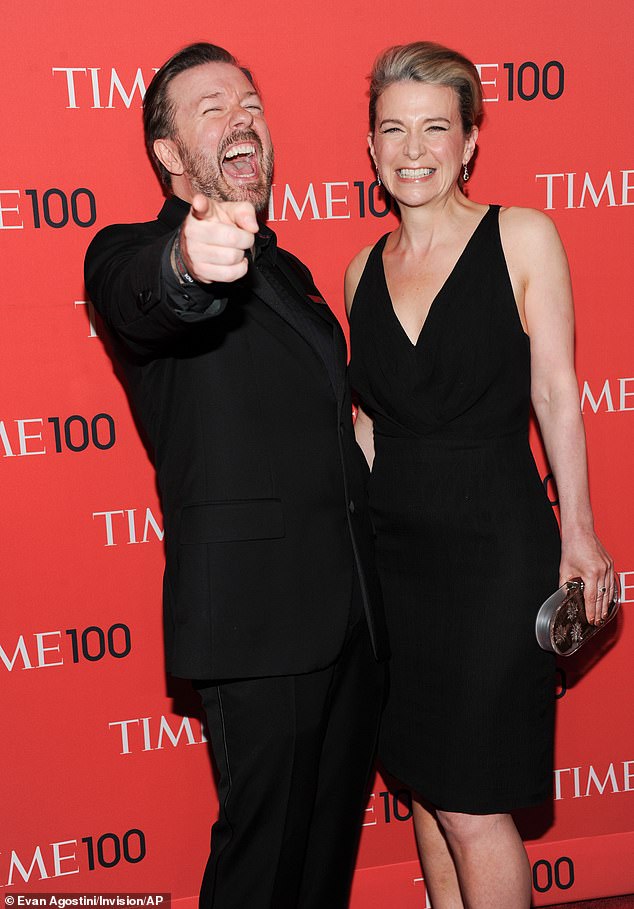 Fallon has nearly 50,000 followers; Gervais has 13 million. Is there any rivalry? Fallon snorts with laughter. ‘My cat’s got more than me!’ It’s true

‘Then my assistant heard back and said: “Oh my God! I’ve got an interview at The Bill! It’s amazing!’ And the other girl said, “So have I.” I thought it was the strangest thing. So this book is about working with someone you think is your friend, but who it turns out you can’t trust.’

One very personal question does spring from the pages of the novel, in which a couple give up their desperate attempts at IVF and get a dog as a baby substitute. Fallon has no children but she does have that cat, so is the same thing going on with her?

Fallon also writes really well about how difficult it can be to come to terms with being the boss, and says it is particularly tricky for women. ‘When I first started at EastEnders I was the series script tester, but on the first day they told me not to tell anyone my title, because someone else in the office had said she was going to leave if she didn’t get the job. She was getting really upset because she thought I was telling her what to do, when that was actually part of my job.’

There’s a creepy moment in the book when a soap actor makes a clumsy pass at Holly. Did anything like that happen to her?

‘Not in television. A lot of the people in charge are women. You’re going to risk not getting another job if you’re a bloke and you behave badly.’

Hollywood is a whole other kettle of sleaze, though. Is she worried about Gervais spending long nights in lonely hotel rooms when he is filming?

‘Oh no. I one hundred per cent trust him. If all this had happened when we were in our 20s then I’d have been absolutely terrified. But now? No. Fame happened to him when he was older, when you know yourself better.’ 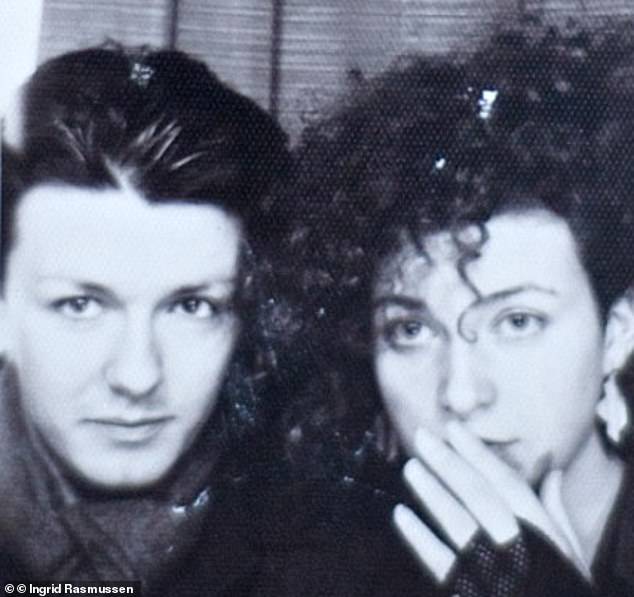 Jane and Ricky met 36 years ago when both were students, and spent a miserable time after university living in a dingy bedsit above a brothel in King’s Cross. It was Fallon who lifted the pair out of poverty first, by landing a career as a script editor and then TV producer

She wasn’t able to help him get a break with The Office back in 2001. ‘Television is very compartmentalised. I was in drama and I didn’t know anybody working in comedy.’

But Fallon did work as a script editor for Gervais on his film Special Correspondents. ‘I’m not competing, so if I don’t agree with something I’ll take a step back, whereas if it was a joint thing we’d be fighting to the death.’

Could they ever work together as equals? ‘No, because we’re both control freaks with work. We both want our way too much.’

And with that Fallon laughs, happy to have made it very much on her own terms.

‘I’d find it really hard, him doing what he’s doing, if I was not successful at something,’ she says, sounding like one of those strong, likeable characters in her books. ‘That would be a very odd imbalance.’