Revenues in the six months to 30 September soared 82 per cent on the same time last year to £215.4million as operating profits rose 121 per cent to £151.7million, Auto Trader told investors today.

The group’s profit margin increased to 70 per cent from 58 per cent in the previous six months, as Auto Trader posted a 126 per cent rise in earnings per share and an interim dividend of 2.7p

It comes at a time of soaring second-hand car prices, with Auto Trader recording the highest ever average price advertised on its website last month.

Auto Trader revealed in October that 17 per cent of ‘nearly new’ second-hand models – those up to 12 months old – are now being advertised for above what they cost brand new. 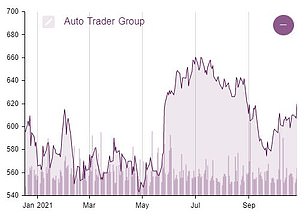 Auto Trader shares are up 12.4% year-to-date

The group has returned £148.4million to shareholders in recent months, through £100.4million of share buy-backs and dividends paid of £48million

Going forward, Auto Trader said it was ‘confident’ about the next six months and it expects operating profit margins for to be in line with expectations for the full year.

CEO Nathan Coe said: ‘Early in the pandemic we acted decisively to protect our people, customers, and business. As a result of these actions, we have emerged as a stronger business which can be seen in our results for the first half of this financial year.

‘This positions us well as we look to partner with retailers to bring more of the car buying journey online, which we believe will provide significant long term growth opportunities.’