Average asking prices jump another £5,700 in a month

Asking prices for homes up for sale across Britain have once again reached new record highs in the past month, fresh figures from Rightmove suggest.

Family homes with three or more bedrooms have become like ‘gold dust’ in many areas, especially in parts of the north, where demand ‘continues to massively exceed supply’, pushing up prices, the property portal said.

Average asking prices increased by 6.7 per cent compared to March 2020. This is the closest month for comparison as the property market, and Rightmove’s index, were suspended for most of April and May last year.

The numbers are striking, but average asking prices are very different to the final price a home ends up being sold for. A property is only ever really worth what a buyer is prepared to pay for it.

Still, with demand from buyers so strong and supply not keeping up, the time taken to sell a home has reached yet another record low of 45 days, according to Rightmove.

The demand and supply imbalance is strongest in northern regions, where a shortage of larger homes is contributing to push prices higher.

Average asking prices in the North West have climbed by more than 11 per cent since March last year, while in Yorkshire & the Humber by over 10 per cent, shortly behind Wales, which saw the biggest price increase at 13 per cent.

In previous market upturns London has generally led the way, but prices are now virtually flat in the capital, having risen just 0.2 per cent since pre-lockdown – although, as Righmove stresses, there are widely varying local markets within the capital. 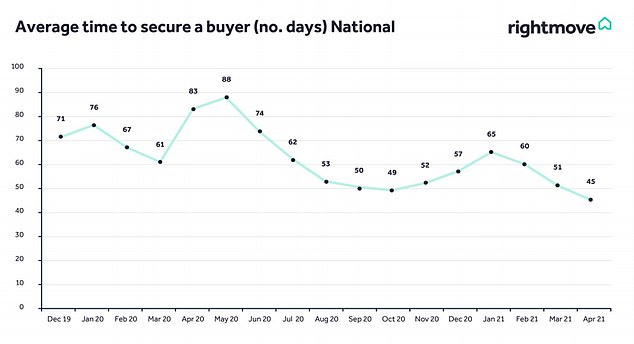 The fast rise in prices in the north and languishing valuations in London means that the price gap between these regions has shrunk to its smallest in eight years.

While the gap remains very large, with average prices in London still 2.9 times higher than those in the north, this ratio is now at its smallest since 2013, Rightmove said.

And added: ‘It is the regions of Britain further north that are leading the way, with some degree of catching up between average prices in London and the north.

‘The pandemic has given a greater focus on the home, and in 2020 we saw a surge in southern coastal and rural areas.

‘So far 2021 is proving to be the year of the northern mover, not only satisfying their pent-up housing needs, but in doing so also narrowing some of the huge price gap with London.’

The number of larger homes available to buy has shrunk significantly during the pandemic, Rightmove said.

Rigthmove gives the example of the North East, where agents last month had almost 60 per cent fewer ‘second stepper’ homes – which are mostly three-bedrooms – for sale than in the same period in 2019.

The situation is similar in Scotland, where ‘top of the ladder’ homes with four or more bedrooms is down 65 per cent compared to before the pandemic.

This has translated in higher asking prices across the country, with top of the ladder homes having increased on average by 10.8 per cent over since March last year, second steppers homes by 7.9 per cent and first-time buyers’ homes by 5.4 per cent. 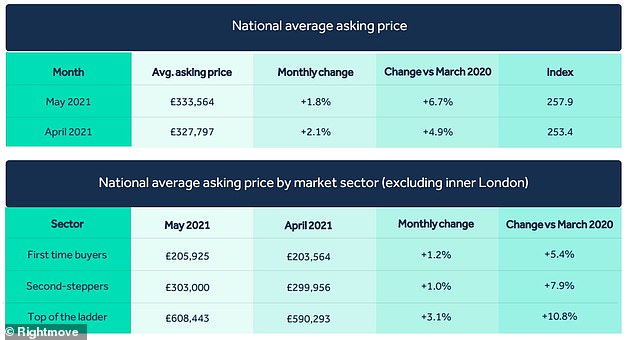 Price shifts: ‘Top of the ladder’ homes have seen the biggest rise in asking prices

In contrast, London’s available stock is down 20 per cent and 24 per cent respectively in these sectors, ‘so while supply is still limited it is more closely matched to demand’.

‘Another important factor driving the higher demand and quicker average time to sell in the north is that more of their sellers are intending to buy and stay local, whereas many Londoners are looking to move out,’ explains Bannister.

Rightmove’s research among those intending to sell in the next 12 months shows that an average of 84 per cent in the north are looking to move locally, compared to only 52 per cent in London.

‘The pandemic has changed many aspects of what people want from their homes, and the pricing pendulum is swinging away from London towards the north,’ Bannister added.

Tomer Aboody, director of property lender MT Finance, added: ‘Londoners who have always craved city life are now less fussy about being at the centre of things and are willing to compromise on location in order to find that elusive space.

‘This, in turn, is pushing asking prices up in other regions at the fastest pace in years, exceeding London in terms of percentage increase in values.

‘Although prices are still much lower in the regions than in London, those averages are rising as demand shifts outwards.’ 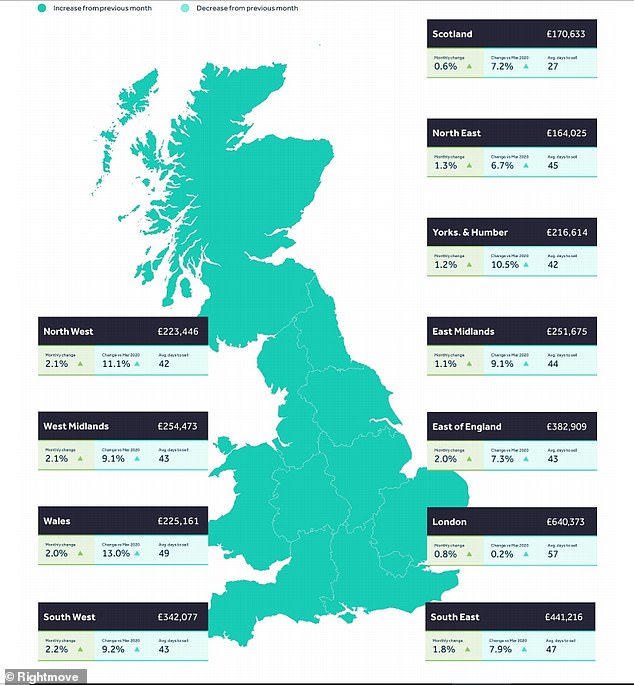 Regional patterns: Average asking prices in the North West have climbed by more than 11 per cent since March last year, while in Yorkshire & the Humber by over 10 per cent, shortly behind Wales, which saw the biggest price increase at 13 per cent

In his recent Budget, Chancellor Rishi Sunak extended the stamp duty holiday in its current form until the end of June, and then tapered until September.

That means homebuyers in England and Northern Ireland will pay no stamp duty on properties worth up to £500,000, saving up to £15,000.

Since the Chancellor first unleashed the scheme last year, the housing market has seen buyer demand – and prices – rise sharply.

Jeremy Leaf, north London estate agent and a former RICS residential chairman, believes the tapering of stamp duty to cause a decline in activity.

He said: ‘These figures confirm what we’ve seen ‘at the sharp end’. Some sellers have taken the opportunity to raise asking prices, making home buying less accessible even for those able to purchase the dwindling stock of properties.

‘On the other hand, we’re finding faster rollout of the second jab, in particular, is helping to encourage older homeowners to put their homes on the market but not fast enough yet to keep prices in check.

‘We expect the imminent tapering of the stamp duty concession to prompt a reduction in activity and softening rather than a correction in prices as longer-term market sustainability is driven by economic recovery and availability of competitively-priced finance.’

‘It’s clear that sellers are attempting to cash in on the stamp duty holiday themselves by reaching new highs where unrealistic asking price expectations are concerned,’ he said.

‘It certainly doesn’t help when this hysteria is being driven by the likes of Rightmove, who continue to pull ‘record’ market statistics out of their hat on a monthly basis, much like a cheap magician at a children’s party.’

He added: ‘When the end of the stamp duty holiday does come and causes buyer demand to evaporate, we’re likely to see property values fall at pace.’