Average house asking price jumps by over £2,400 in a month

The average asking price for a property in the UK kept creeping up this month and more sellers have put their properties on the market, figures from a leading property website suggest.

However, Rightmove added that it’s taking longer to sell homes.

Rightmove said the figures suggested the market remained resilient, although this rate of growth was ‘well below’ the 1.6 per cent monthly average at this time of year over the last ten years.

Prices rose in all regions between January and February, except for small fall in the South West

All regions saw price rises between January and February, except for a marginal fall in the South West, where prices dropped by £131, the website said.

Scotland saw the biggest monthly increase, with prices up 5.1 per cent, while the North East and Wales saw increases of 3.6 per cent and 3.5 per cent respectively.

Miles Shipside, Rightmove director, said: ‘Whilst it is the norm for new sellers’ asking prices to be buoyant at the start of a new year, this first complete month in 2018 is seeing more pricing optimism than the comparable period in 2017.

‘The political and economic uncertainty is out of sellers’ control, but they are in control of their asking prices, and in general they are not being overly ambitious or setting too high an asking price.’

Rightmove also noted that there were signs that sellers were slowly coming back to the market, with a ‘modest’ 2 per cent increase in the number of properties for sale compared to last year.

However, stretched buyer affordability coupled with seasonal factors means it’s taking longer to sell a home across the country, although this varies greatly across regions.

On average, it’s taking 72 days to sell a home in the UK, up from 67 days last month but more or less the same amount of time as in January last year.

In London, it takes even more – 83 days. But there are some places where homes are being snapped up much quicker than the capital and the national average, Rightmove said. 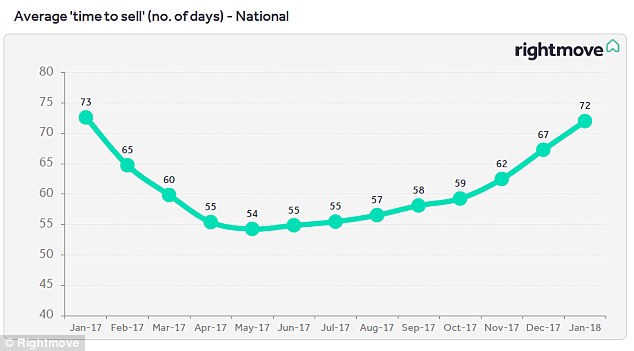 It’s taking longer to sell a home across the country, although this varies greatly across regions

Livingston in West Lothian, Scotland currently comes out on top, with homes there selling after just 17 days. Falkirk, in Stirlingshire, Scotland, was identified as the next biggest hotspot, with homes there taking 20 days to sell on average.

Rugby and Nuneaton in Warwickshire, Hitchin in Hertfordshire and Wellingborough in Northamptonshire are also hotspots, with properties in these places all taking 21 days to sell on average.

All these locations have seen asking prices rise in between 5 per cent and 9 per cent over the past year.

The biggest decline in London was in Lambeth, where prices plummeted by 7.3 per cent, while Bexley saw the biggest increase at 4.2 per cent.

On average, asking prices across the capital rose by 4.4 per cent on a monthly basis, but they were down 1 per cent compared to last year.