On Bachelorette finale night, Jarrod Woodgate, Stu Laundy and Sophie Monk were placed in the same hotel, just metres away from each other.

And things got VERY awkward, it’s been revealed, with winner Stu reading out the text Jarrod sent him after he overheard the new couple ‘celebrating’ their love.

‘He texted me at one point and said “I can hear you,” he told the Kyle and Jackie O Show on Friday.

‘I can hear you’: Bachelorette winner Stu Laundy has revealed runner-up Jarrod Woodgate sent him a text on finale night, after he heard him ‘celebrating’ his victory with Sophie in an adjacent hotel room 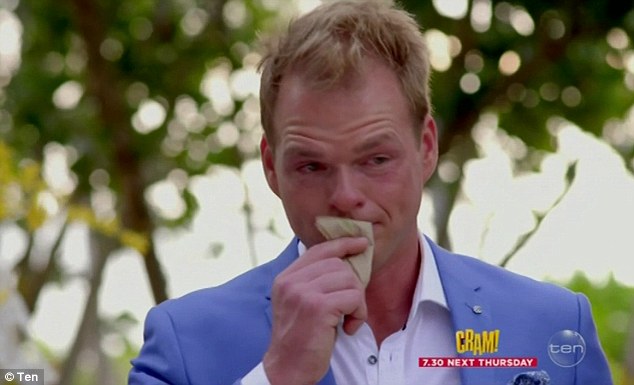 Too close for comfort: The trio were placed in the same hotel for finale night he told Kyle and Jackie O on Friday – and turns out Jarrod could hear everything in Stu and Sophie’s room

With the new couple finally able to go public, it appears they didn’t hold back when given the chance to spend the night together for the first time.

To make matters more awkward, Sophie revealed that Stu felt bad for Jarrod after receiving the text and wanted to go and console him.

‘Stu wanted to go see him!’ she told the KIIS FM hosts.

Hours before the finale on Thursday, Daily Mail Australia shared exclusive pictures of eventual winners Stu and Sophie at the Sydney hotel they celebrated their victory.