Travellers on temporary visas in Australia might have to illegally extend their stay as their home countries close borders because of the coronavirus outbreak.

The Department of Home Affairs and Australian Border Force have announced new measures to deal with temporary visa holders in Australia.

‘Applications for a new visa should be made before their current visa expires.’

There are now additional resources to process ‘No Further Stay’ waiver requests on visas that have the condition attached to them.

Birthe Skingen (pictured), from Norway, has been living in Australia for five years and is planning to either leave the country as soon as possible or extend her visa 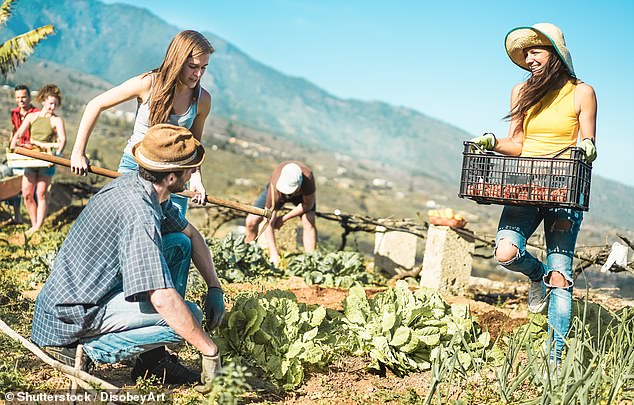 ‘Our firm has been contacted by a range of visa holders (partner, student, employer sponsored), Australian citizen family sponsors and businesses to seek advice on how the Australian Governments COVID-19 measures will impact them,’ she told Daily Mail Australia.

‘We deal with vulnerable clients on a daily basis. COVID-19 is certainly a cause for concern for visa holders, visa applicants and sponsors across the migration program.’

Birthe Skingen, from Norway, has been living in Australia for five years and is planning on either leaving the country as soon as possible or extend her visa.

The 25-year-old, who was meant to depart Australia in May, was contacted by family over the weekend saying she should consider moving forward her leave-date as the ‘situation at home was getting worse’.

‘I’ve been stressing out all weekend and I just couldn’t do anything because I couldn’t get a hold of the embassies or immigration,’ she told Daily Mail Australia. 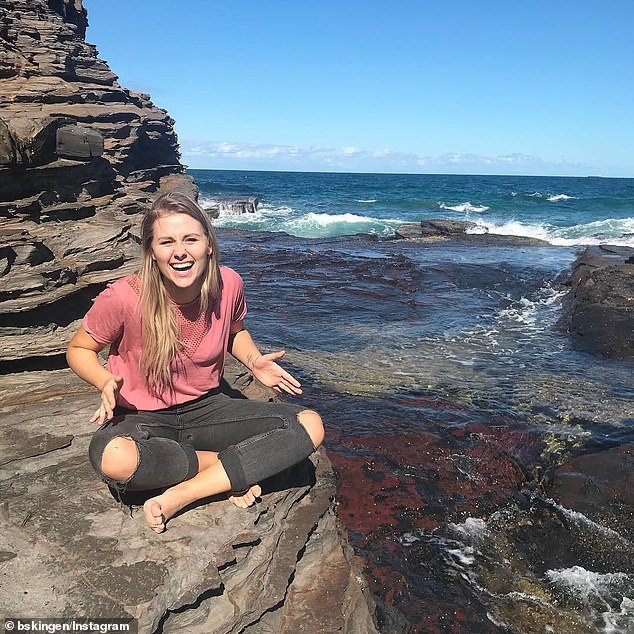 The 25-year-old, who was meant to stay in Australia until May, was contacted by family over the weekend saying she should consider moving forward her leave-date as the ‘situation at home was getting worse’

‘When the situation changes so quickly, it is right to give this advice,’ she told reporters.

As of Wednesday there are 1,470 confirmed cases of the coronavirus with 71 of those people being treated in hospital and three deaths.

All schools and universities are closed until at least March 26, most bars and restaurants have also been told to stay closed unless they can guarantee social distancing.

Prime Minister Erna Solberg announced the closure of all Norwegian airports and seaports on Tuesday, only allowing citizens and permanent residents to return.

While Norwegians who are currently abroad are being urged to keep up with national and local news, this is only adding to Ms Skingen’s worries.

The 25-year-old was told by Immigration on Monday if things get worse closer to her expiration date and there’s no way for her to leave, she has to apply for another visa.

‘There’s no other visas I can apply for – I could apply for the tourist visa but I have to do that while offshore… I can’t get offshore,’ she said. 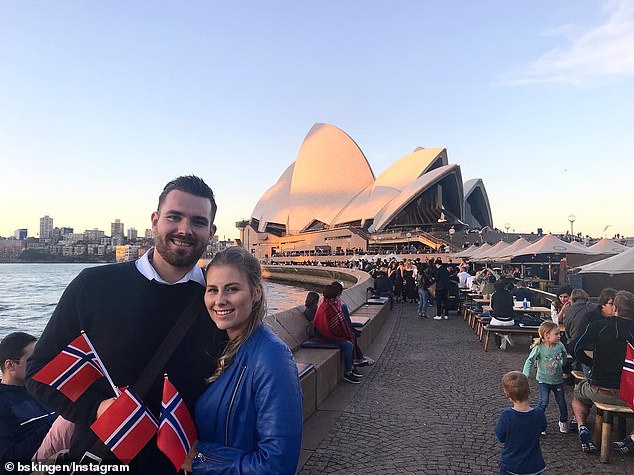 ‘I’m even more stressed because we might have to close work because financially we might not be able to stay open.’

Ms Skingen knows she isn’t the only person in this situation but is worried about what will happen over the next few months.

‘We can’t expect things to get better between now and May, if anything it’s going to get worse,’ she said.

Ms Anderson said anyone coming to the end of their visa and is does not have the No Further Stay Condition, they may be able to apply for a Visitor Visa.

‘The Department of Home Affairs does not always provide correct advice,’ she said. 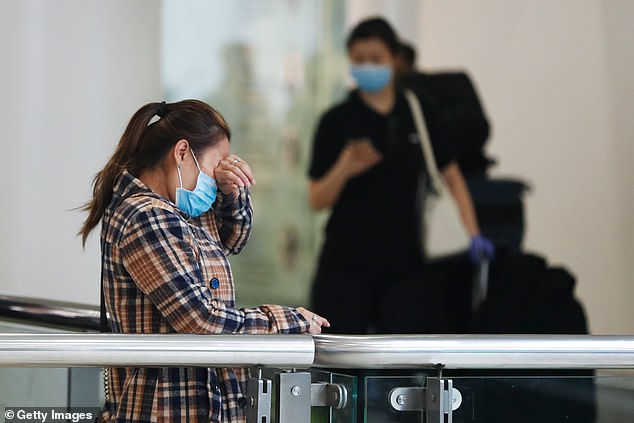 ‘This emphasises the need for visa holders to be advised of their visa options on the basis of their individual circumstances.’

‘Any person in such a circumstance should contact a lawyer, preferably an Accredited Immigration Law Specialist, for advice based on their specific circumstances.’

Lawyer Tanja Djokic from Withstand Lawyers told Daily Mail Australia that due to the current situation, backpackers on temporary visas will need to apply for another visa in order to extend their stay if they are unable to fly back to their home country.

‘If they have flights and are able to go back, there shouldn’t be any issues – however, they may be required to self-isolate once they arrive to their destination if this is a policy that particular country has put in place,’ Ms Djokic said.

‘If in Australia, no visa should be overstayed as this can have significant implications for future Australian visa applications.’

Ms Djokic said as the coronavirus outbreak is continuing to become a global crisis she has had an inundation of phone calls of temporary visitors stressing about their visas. 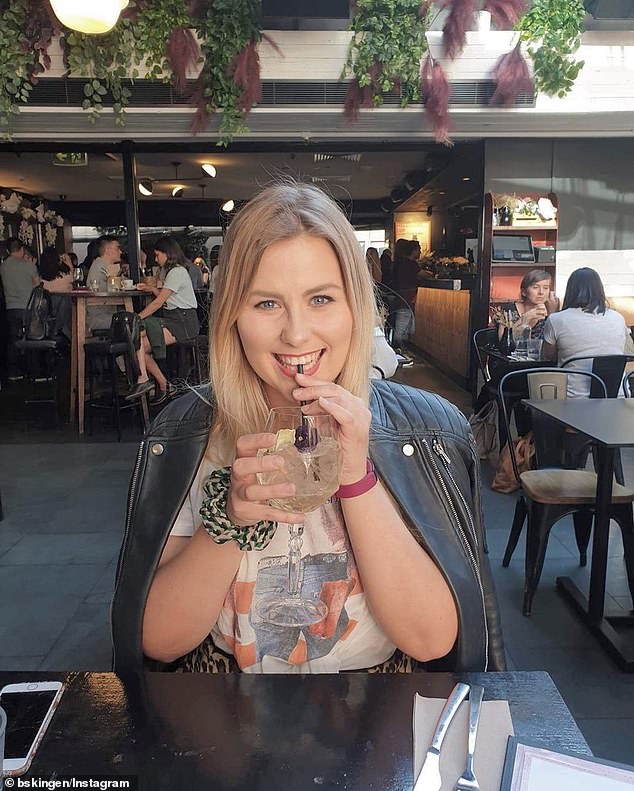 ‘We assess every client based on their circumstances and give them options on what visas they can apply for if they wish to remain in Australia,’ she said.

‘Considering this is the first time we are experiencing this in over 100 years, it really isn’t possible for me to confirm what the government will do if people either overstay or are affected by COVID-19.’

‘Unfortunately, we have to monitor the situation on an hourly basis as it is changing continuously.’

Lillian Ajuria from Ajuria Lawyers also said the number of calls from international travellers has increased significantly and said ‘people are very worried’.

‘Under the Migration Act people without a valid visa are liable to detention and removal from Australia, however, it’s hard to imagine Australian Border Force will be actively trying to detail people who then would have no practical way of being removed from Australia,’ she said.

‘Although we have no official information on this, in our view, people will not be deported during this crisis.’

‘That said there are very serious repercussions for people who remain in Australia without a visa, so they should apply before becoming unlawful.’ 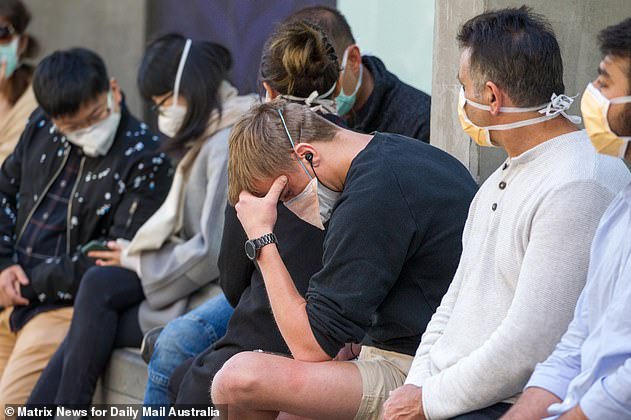 A spokesperson from the Department of Home Affairs said anyone looking to extend their stay in Australia will need to apply for another visa. Pictured: People waiting outside Royal Melbourne Hospital to be tested for coronavirus