Fugitive Barcelona terrorist Younes Abouyaaqoub refused to shake hands with his female relatives as he became increasingly pious in the months before the Barcelona atrocity, it emerged today.

The 22-year-old, who previously visited nightclubs and drank alcohol, bought a biography of the prophet Muhammad and adorned the walls of his Spanish home with verses from the Koran.

Relatives and friends have told how he transformed from a relaxed teenager – who worked hard selling shoes before dawn and bought a new BMW with his first pay packet – into a religious fanatic in just a year. 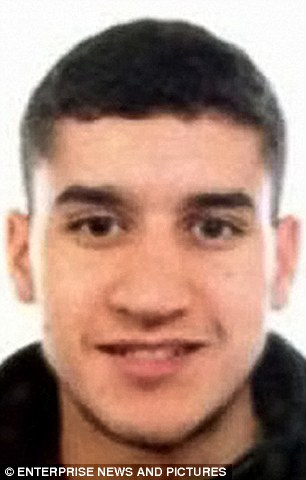 Wanted: Younes Abouyaaqoub is accused of driving the van that killed 13 people in Las Ramblas before going on the run. He was pictured on CCTV, left, and right, apparently before he became radicalised 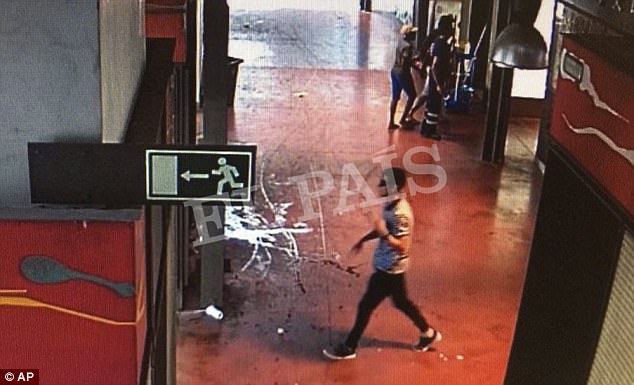 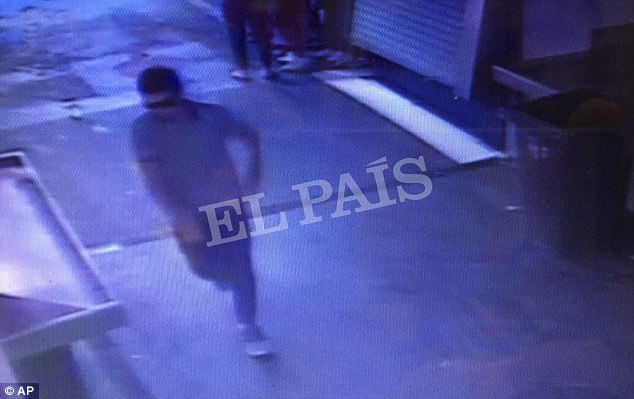 The 22-year-old Moroccan can be seen coolly making his way past the stalls of the covered food hall, just off the popular Las Ramblas walkway

Today, as police issued a ‘wanted’ posted describing Abouyaaquob as ‘dangerous’ and the driver of the Las Ramblas van, relatives in Morocco revealed details of his final visit.

They told how Abouyaaquob arrived at the family home in Mrirt, a remote village of Morocco, without warning with his cousin Mohamed Hychami, who was also part of the so-called Tarragona Jihadi cell that would kill and maim in Barcelona and Cambril.

‘Up until last year Younes was totally normal, but when he visited us earlier this year he refused to shake our hands,’ a female cousin, who asked not to be named told Reuters.

‘I opened the door and I saw Younes and Mohamed [Hychami] on motorcycles.

‘No one in the family knew they were coming.

‘That was the last time we saw them.’ 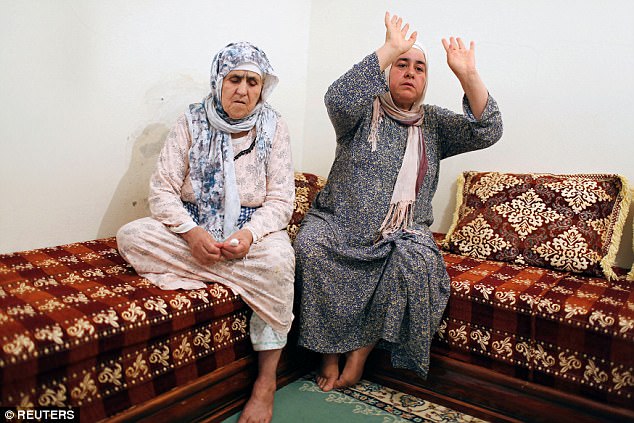 Desperate family: Abouyaaqoub is from a small town in Morocco where his family insist that he was ‘brainwashed’ by forces in Spain. Fatima Abouyaaqoub, aunt of Barcelona attack suspect Younes, used to spend holidays with him in the family home in Mrirt, Morocco 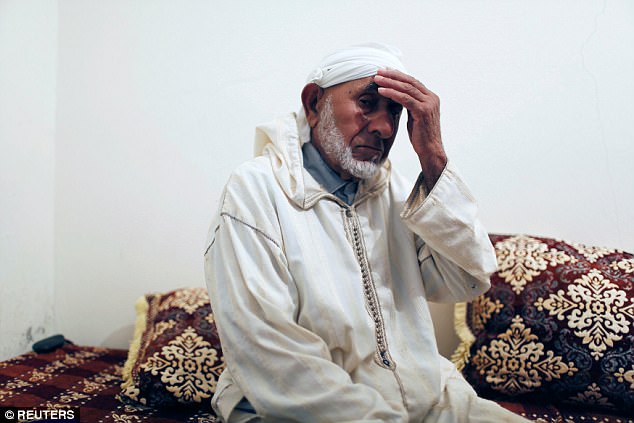 Radicalised: Qedouch Abouyaaqoub, grandfather of Barcelona attack suspect Younes Abouyaaqoub insisted he had been ‘brainwashed’ in Spain and not fallen under any influences in Mrirt, Morocco 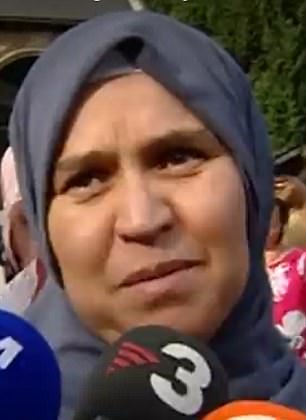 But Younes – who police say may have escaped to France – became pious, praying frequently and reading up about Islam and the prophet Mohammed.

‘Younes came in, showered, went to Friday prayer at the local mosque and we all had lunch together,’ the cousin said.

Abouyaaquob is said to have adorned the walls of his home in Ripoll with verses from the Koran and was reading a biography of the Islamic prophet of Mohammed in Spanish.

Neighbours have also told how Younes had turned in on himself and rejected the Spanish lifestyle that he and his younger brother had grown up with.

‘Younes was very shy, he seemed to have turned in on himself over the past months,’ a young woman who lives in the same apartment block told MailOnline.

‘He didn’t have a girlfriend and he didn’t go out any more.

‘He had been a normal kid but he sort of changed.’

A former classmate said: ‘Younes was a good student. He studied electrical engineering. There is metallurgical industry here, that’s where you work. 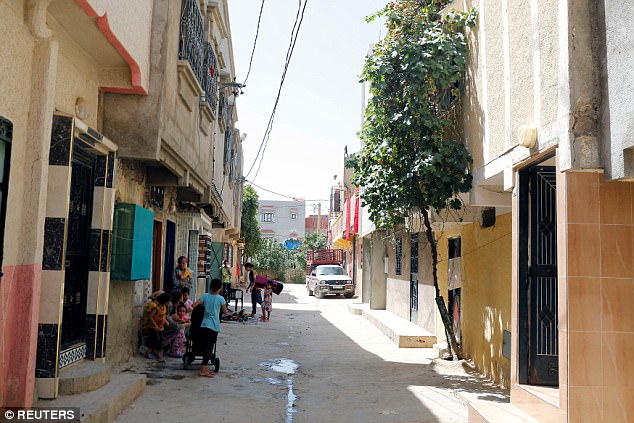 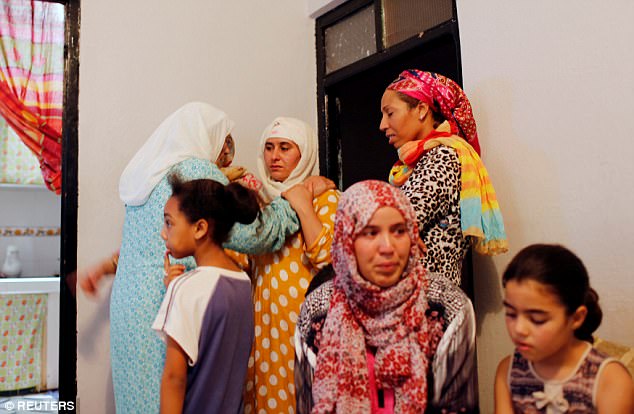 Conservative: An unnamed female relative of Younes told Reuters: ‘Up until last year Younes was totally normal, but when he visited us earlier this year he refused to shake our hands’ 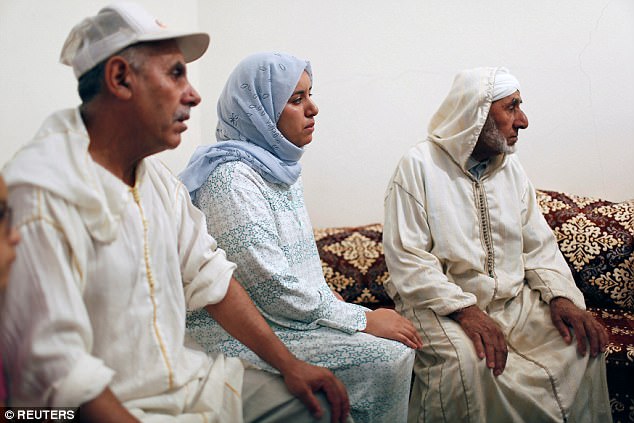 Relatives told how Abouyaaquob arrived at the family home in Mrirt, a remote village of Morocco, without warning with his cousin Mohamed Hychami, who was also part of the so-called Tarragona Jihadi cell that would kill and maim in Barcelona and Cambril

‘In High School, one Saturday each month, Younes got up at dawn to work in the market selling shoes. He was paid €50.

‘When he started working, he bought a BMW 1 series with his first pay packet. I was jealous.’

Meanwhile Abouyaaquob’s relatives have condemned his terrorist atrocities and claimed he was radicalized in Spain.

‘I hold no sympathies for Younes,’ his aunt Fatima Abouyaaquob told Reuters.

‘Even if they catch him and kill him.’

‘I wanted to die, I could not believe it,’ his grandmother Chrifa Hychami added.

His grandfather Aqbouch Abouyaaquob has apologized for his grandson’s actions and said that the crimes Younes has committed are completely against Moroccan culture and tradition.

The 80-year-old told El Pais: ‘One thing is for sure, my grandson was not radicalized here [in Morocco], he was brainwashed in Spain.’

His aunt added: ‘Whatever changed them [Abouyaaquob and Hychami] happened in Europe, not here.

The Imam suspected of masterminding the Barcelona terrorist attacks travelled to Belgium three months before the Brussels bombing and was friends with the Madrid train bombers, it has been revealed.

Police are now looking into whether Abdelbaki Es Satty, who they also believe radicalised members of the terror cell that attacked Barcelona and Cambrils, was involved in the deadly ISIS attacks on the Brussels airport and underground in 2016.

Es Satty was reportedly friends with some of those jailed for the Madrid train bombings in 2004, having spent four years in prison himself for drug trafficking and breaking Spanish immigration laws.

El Mundo newspaper, quoting anti-terrorist sources, said that in 2012 Satty left prison where ‘he had struck up a special friendship with another detainee, Rachid Aglif, nicknamed ‘the rabbit’.

A Catalonia police chief said today that authorities have strong evidence Es Satty is among the dead after an explosion in Alcanar.

‘Those boys can’t even read Arabic.’

The oldest son of immigrant parents, Younes was born in Mrirt, a remote village in the mountains between Fez and Marrakesh.

His father Omar had got a job in Ripoll in the timber industry and aged four Younes traveled with his mother Ghanno Gaanimi and younger brother Houssa to Spain, taking the ferry across the Straits of Gibraltar for the first time in 1999.

The Abouyaaquob brothers enrolled at a local school where their Moroccan background and lack of Spanish was not unusual among the 1000-strong immigrant community.

Younes is described as ‘normal’ by his peer group in Ripoll – from both Spanish and Moroccan families.

A family friend told MailOnline: ‘Younes was just a normal young man, like the others who have been caught up in this mess.’

A teenage neighbour added: ‘Younes was a nice guy. A bit shy, but a nice guy. God knows what happened to him for him to have done what he did?’

Strong and athletic, Younes even won trophies for running and climbing.

He got a job at a local factory after school, gaining diplomas in health and safety at work and became a qualified fork lift truck driver.

However over the past year he became increasingly obsessed with Islam, praying more frequently and reading up about the prophet Mohammed.

His relatives claim he was brainwashed.

His uncle Mohamed Abouyaaquob told El Pais: ‘I believe it was the imam of Ripoll [Abdelbaki Es Satty] who converted them [to radical islam].