Labor officials are investigating Barstool Sports founder Dave  Portnoy after he tweeted a threat to fire any of his employees who attempted to unionize.

Charging papers were filed with the National Labor Relations Board by a group known as the ‘Committee to Preserve the Religious Right to Organize,’ reports The Hollywood Reporter.

The Committee, in its filing, called the sports bar chain executive a ‘crazed president,’ and demanded he publicize and tweet a ‘severe and sincere’ apology for his remarks.

‘So they are suing for a heart felt [sic] apology? Is that really what I just read? How about this? Go f__k yourself. Case dismissed,’ Portnoy tweeted in response on Friday.

Labor officials are investigating Barstool Sports founder Dave Portnoy (above) after he tweeted a threat to fire any of his employees who attempted to unionize. 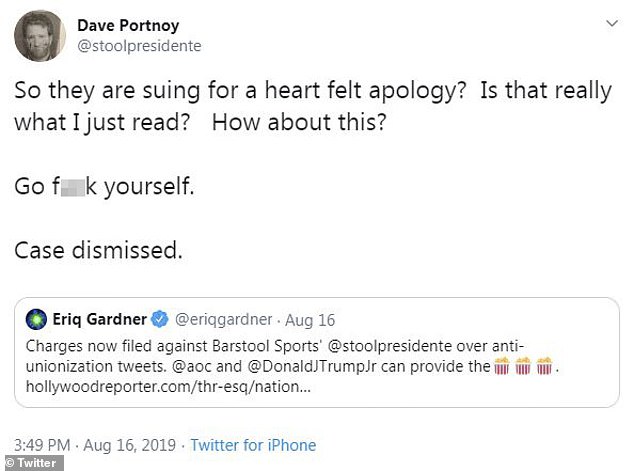 Charging papers filed against Portnoy, called the sports bar chain executive a ‘crazed president,’ and demanded he publicize and tweet a ‘severe and sincere’ apology for his remarks. He posted his response (above) on Twitter.

Portnoy first threatened his workers after writer Rafi Letzter extended an open invitation to Barstool employees to contact him to learn more about unions.

Letzter had been responding to Portnoy’s comment in an August 12 tweet he posted about an effort to unionize at Bill Simmons’s media company, The Ringer.

‘BAHAHA! I hope and I pray that Barstool employees try to unionize. I can’t tell you how much I want them to unionize. Just so I can smash their little union to smithereens,’ he wrote.

Letzter, a staff writer at Live Science fired back in a tweet.

‘If you work for Barstool and want to have a private chat about the unionization process, how little power your boss has to stop you, and how you can leverage that power to make your life better: my DMs are open.’ 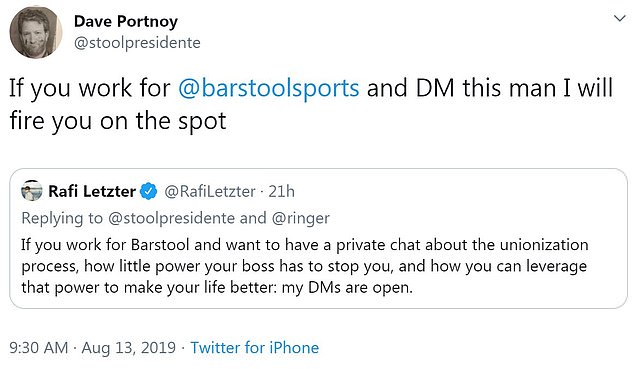 Portnoy made it clear in another tweet what would happen if any of his workers reach out to Letzter.

‘If you work for @barstoolsports and DM this man I will fire you on the spot.’

The heated exchange got noticed by Alexandria Ocasio-Cortez, who then took to Twitter herself to warn Portnoy’s comment on social media may have violated federal labor laws.

‘If you’re a boss tweeting firing threats to employees trying to unionize, you are likely breaking the law & can be sued, in your words, ‘on the spot,” she wrote. 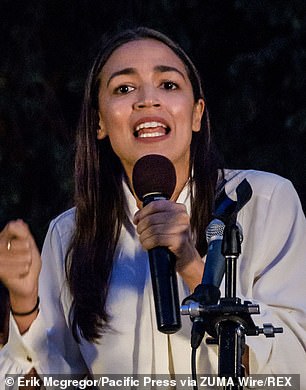 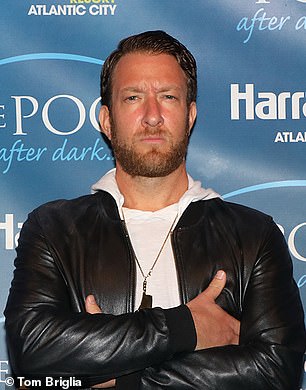 Alexandria Ocasio-Cortez (left) blasted Dave Portnoy (right), the founder of Barstool Sports who threatened on Twitter to fire any of his employees who inquire about unionizing 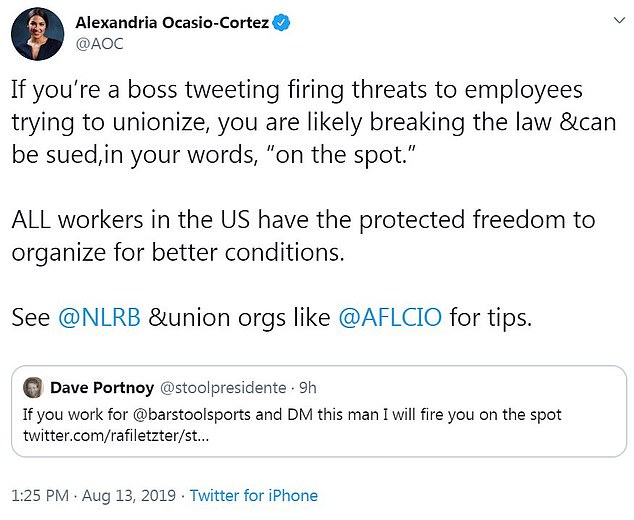 That tweet prompted AOC to slam the media company’s founder on Twitter. ‘If you’re a boss tweeting firing threats to employees trying to unionize, you are likely breaking the law & can be sued, in your words, ‘on the spot,” she wrote

‘ALL workers in the US have the protected freedom to organize for better conditions,’ she added, before encouraging employees to see ‘@NLRB & union orgs like @AFLCIO for tips’.

Barstool Sports, which is affiliated with the Chernin Group, was founded by Portnoy in 2003.

DailyMail.com has made a freedom of information request to obtain the charging papers filed against him.

Federal labor officials acknowledged they will gather evidence and take affidavits  from parties and witnesses as part of the probe, according to The Hollywood Reporter.

They said they will decide if Portnoy broke labor laws within the next few months, unless the charges are withdrawn.

Enough evidence to support the charging documents will first trigger settlement talks to avoid a formal complaint and hearing before an administrative law judge.

‘And if it gets that far, a federal court could be petitioned for an injunction against Portnoy, labor officials said.

Portnoy also responded to others who called him out for his views over unionizing.

‘I didn’t take a vacation day for 10 years. That earned me the right to decide when my property/employees get their weekends,’ he told one Twitter user.

He went on to issue further threats, even while responding to a lawyer.

‘Anybody who hires this lawyer will be fired immediately and I will personally sue you for damages and back wages,’ Portnoy said in response.