A woman who thought she was expecting her first child was devastated to discover her longed for ‘baby’ was actually cancer.

Megan, 23, was diagnosed with a molar pregnancy after experiencing heavy vaginal bleeding at 10-and-a-half weeks.

Despite having the tumour in her womb removed, Megan’s cancer returned, forcing her to endure eight weeks of grueling chemotherapy.

After many weeks of treatment, Megan, from Belfast, was finally given the all clear last week and hopes to one day be a mother.

The former hairdresser said: ‘Losing our baby was devastating, but now we are looking forward to trying again and starting a family.’

Molar pregnancies occur when a lump of abnormal cells develop in the womb rather than a foetus. They can become cancerous if the growth is not removed.

Around one in 590 pregnancies in the UK are molar.

Megan, who thought she was expecting her first child, was devastated to discover her longed for ‘baby’ was actually cancer (pictured earlier this month after being given the all clear) 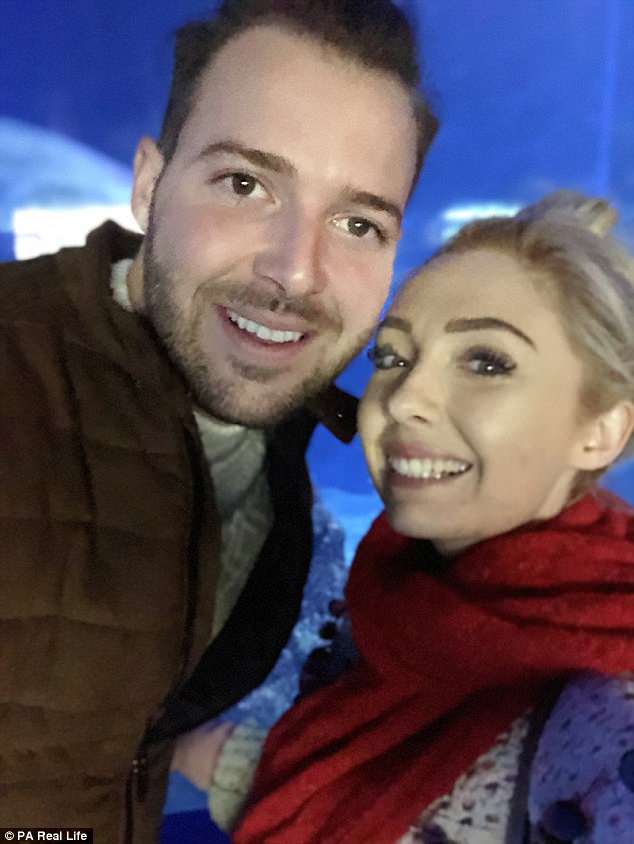 Twenty-three year old Megan (pictured with her husband Jake, 23) was diagnosed with a molar pregnancy after experiencing heavy vaginal bleeding at 10-and-a-half weeks 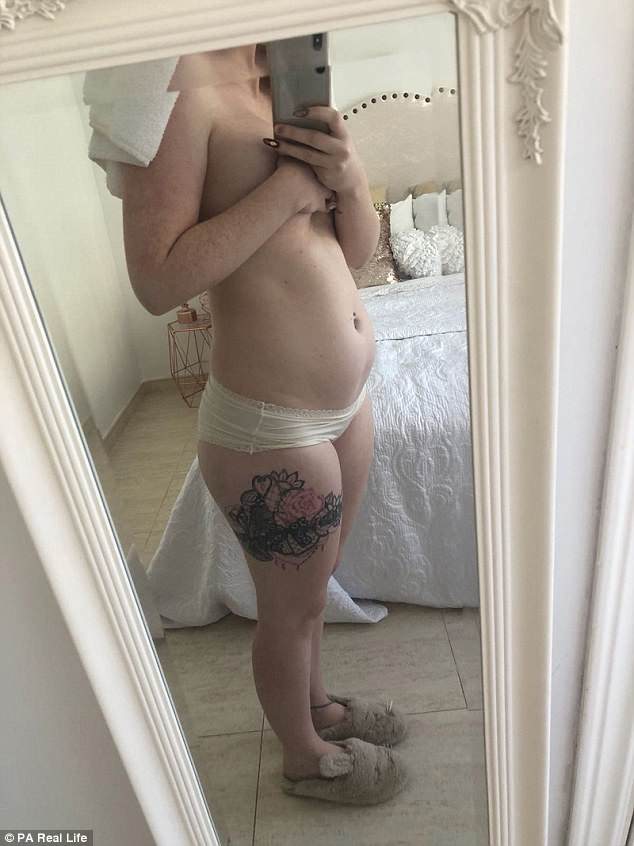 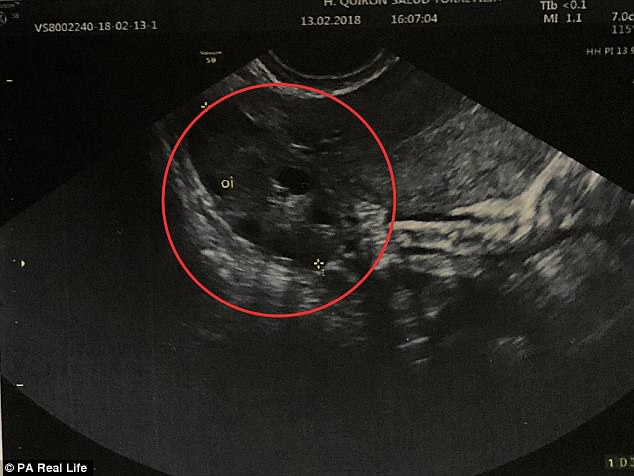 ‘We were so happy to be having a baby’

When Megan, who now lives near Alicante, Spain, discovered she was pregnant just before Christmas last year, she was overjoyed.

She said: ‘My period was five days late when I was back in Belfast visiting family and I had a feeling I might be pregnant.

‘We’d been trying for three months, so when I did the test back in Spain with [my 23-year-old husband] Jake it was the best feeling in the world.

‘He cried his eyes out and I was in total shock. We were so happy to be having a baby.’ 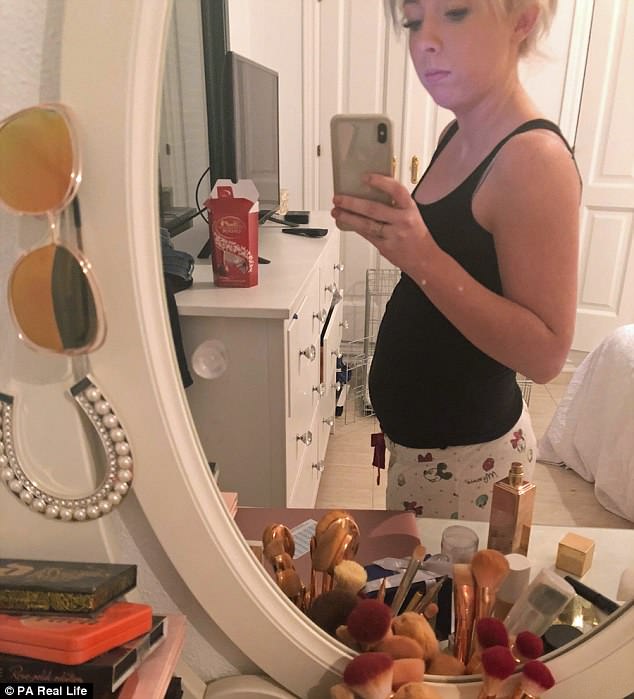 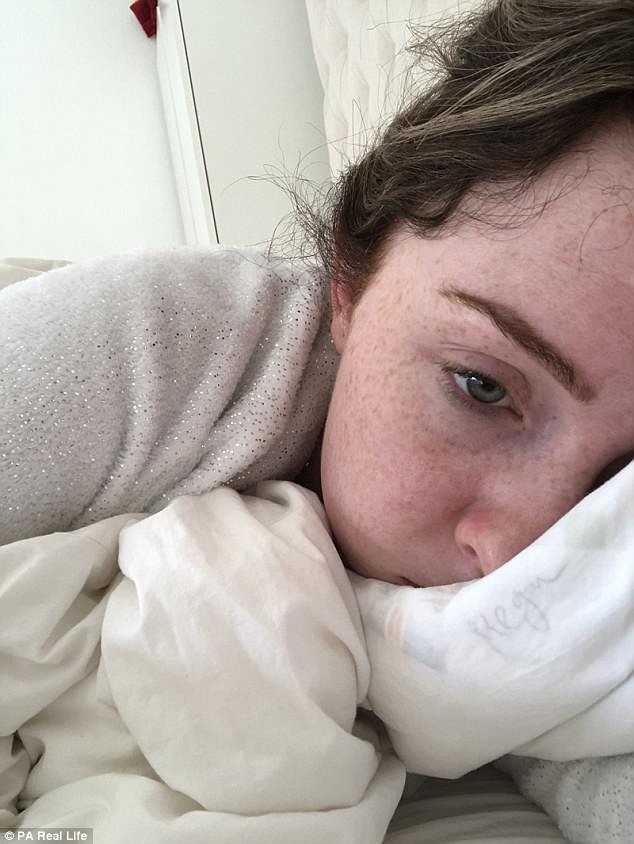 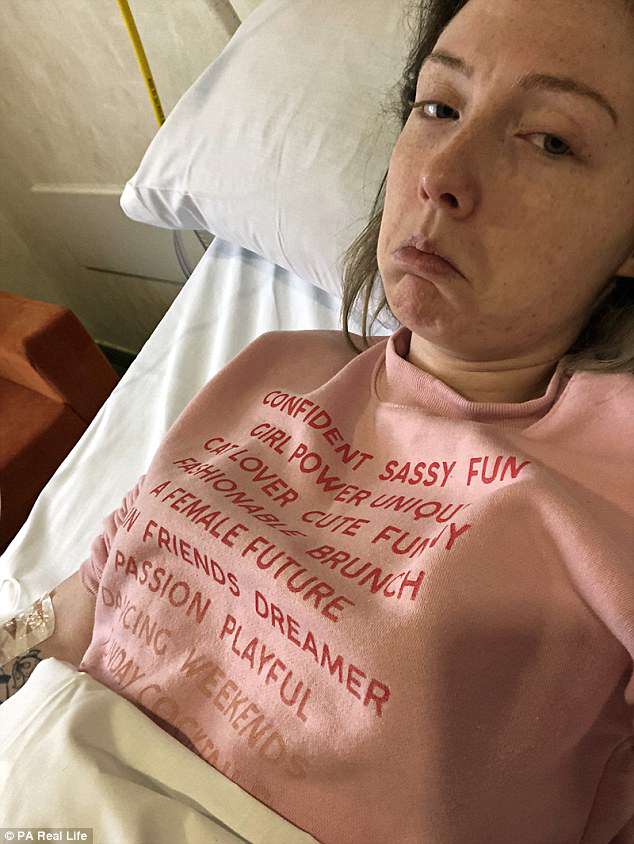 After undergoing a scan, Megan was devastated to learn she was not actually pregnant

WHAT IS A MOLAR PREGNANCY?

A molar pregnancy occurs when a lump of abnormal cells grows in the womb instead of a healthy foetus.

A ‘complete mole’ is when there is no foetus, while a ‘partial’ occurs when a foetus starts to form but cannot develop into a baby.

Many women have no symptoms and are unaware they are having molar pregnancies until routine ultrasound scans.

Medication may also be necessary.

Treatment may also be required to remove any leftover abnormal cells, which can turn cancerous.

Molar pregnancies do not affect women’s chances of conceiving in the future.

Rushed to hospital with severe bleeding

Yet their joy was short lived when Megan was struck down with extreme nausea and,  just eights into her pregnancy, her ‘baby bump’ was so swollen that a midwife commented on its unusual size.

When she began to experience heavy vaginal bleeding, Jake rushed Megan to their nearest hospital, where she was given a transvaginal ultrasound scan.

Megan said: ‘The moment they turned the scan screen away from me, I knew something was seriously wrong.

‘The nurse sent for the doctor and he came in and told me my baby wasn’t there anymore.

‘I was totally devastated and had no idea what had happened. All I knew was that we’d lost our baby.’ 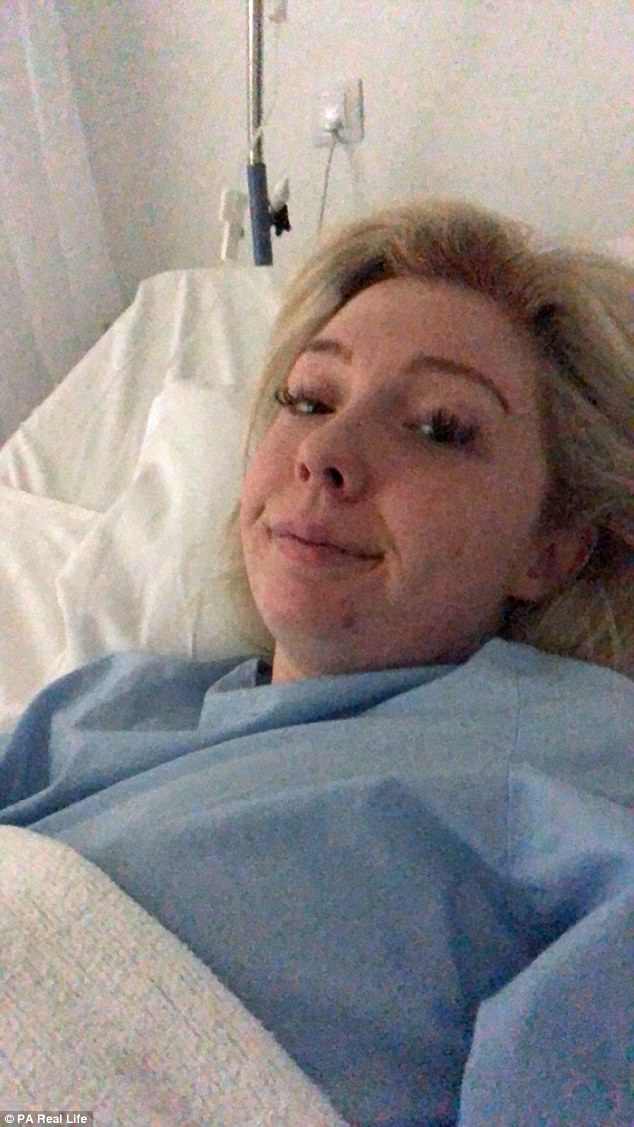 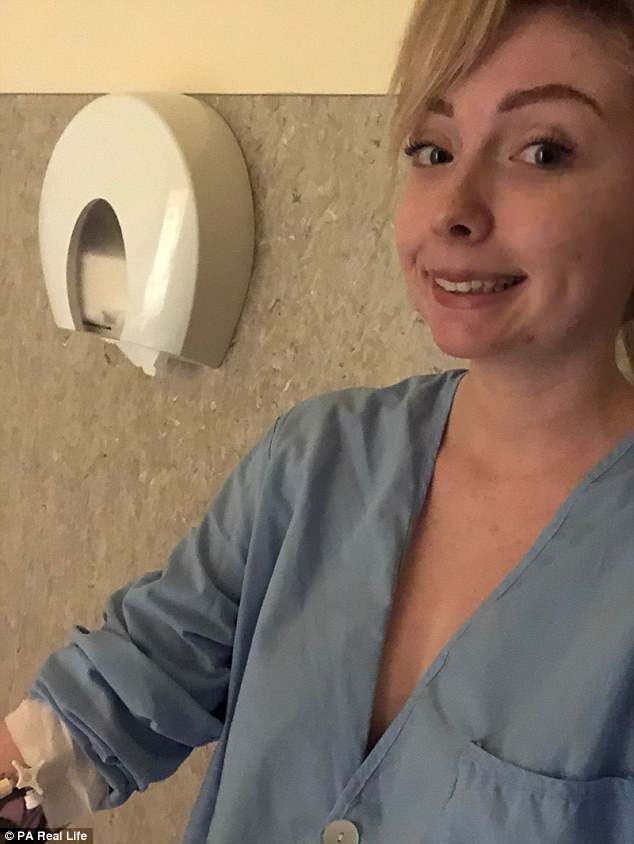 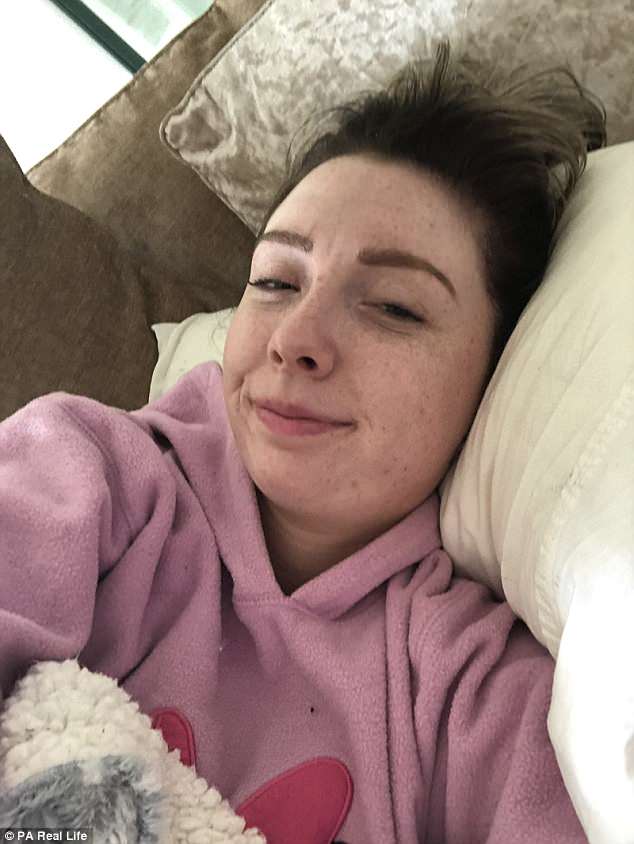 After enduring weeks of grueling treatment, Megan was finally given the all clear last week

‘What I had thought was a baby was actually a tumour’

Megan was told she had in fact had a molar pregnancy and needed to return to the hospital the next day to have the ‘baby’ removed.

She said: ‘To go from thinking we were having a baby to finding out it was cancer, requiring immediate treatment, was devastating.

‘Scared, I rang my mum afterwards, crying my eyes out, saying it could be cancer.

‘I could not believe that what I had thought was a baby was actually a tumour, growing inside me.’

Due to the risk of the molar pregnancy tissue continuing to grow, Megan’s hormone levels were monitored post-surgery, to ensure they stayed low.

Megan said: ‘Doctors said that, if the levels of pregnancy hormones started increasing or didn’t drop to normal, then it could be a sign that I needed treatment, like chemotherapy.

‘At a check-up, they said my levels had risen, so I had an ultrasound scan at Hospital Quirón Torrevieja, in Alicante, a private hospital, to be seen quicker and a growth was spotted.

‘Hearing the news, I just broke down. I was petrified about what was inside me. Doctors believed it was cancerous and wanted to start me on chemotherapy right away.

‘Looking at the scan on the screen, I could see the tumour.

‘It was like a cluster of grapes and doctors believed a small amount had continued to grow after the first tumour was removed.’ 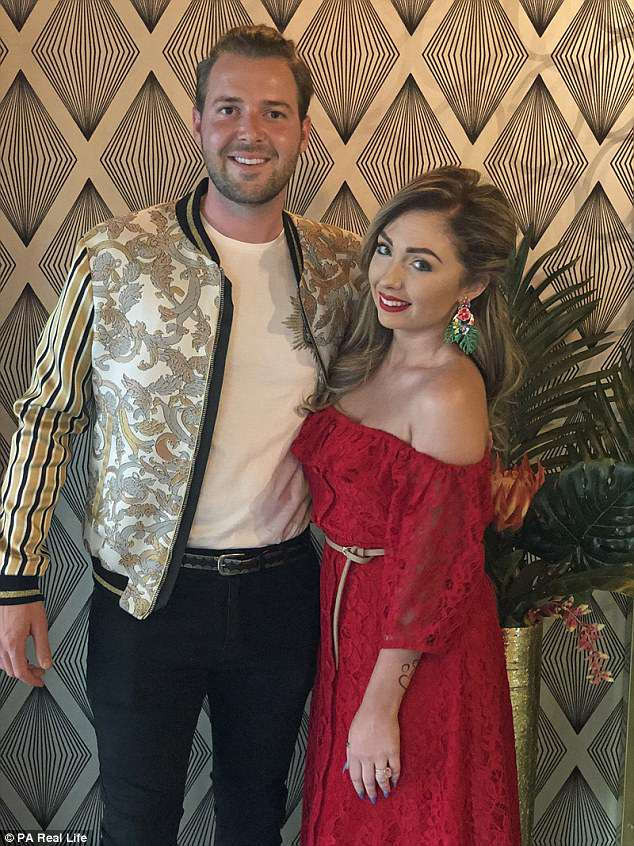 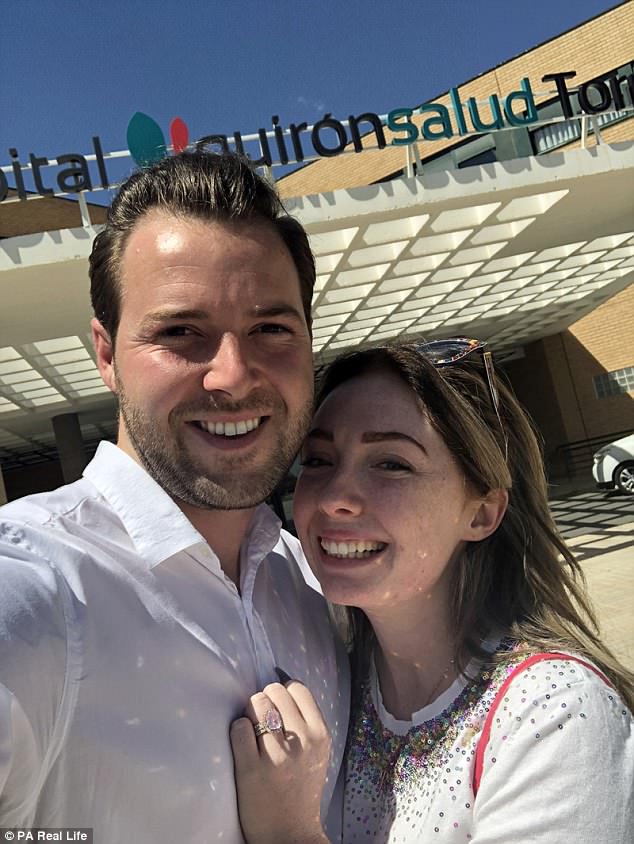 Although devastated by their loss, Megan said being given the all clear was ‘amazing news’ 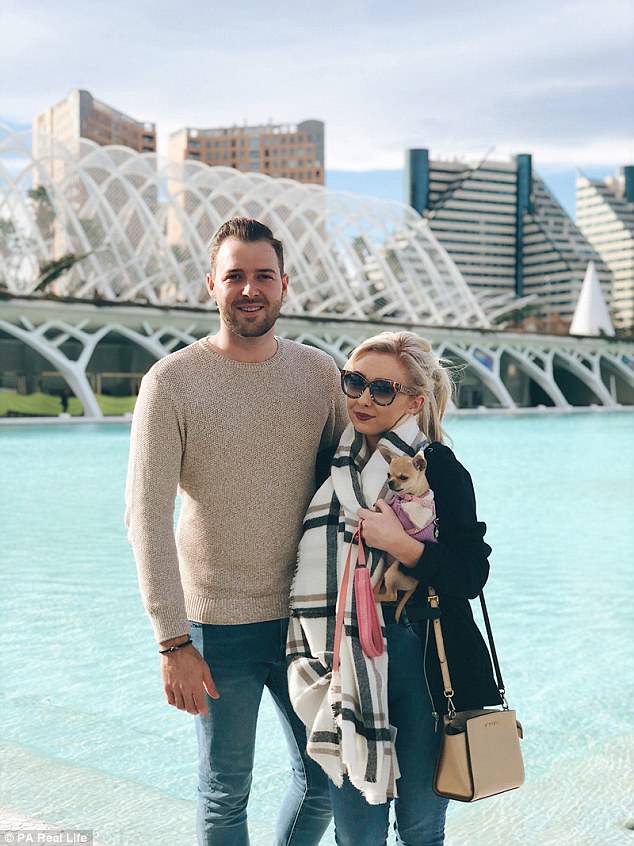 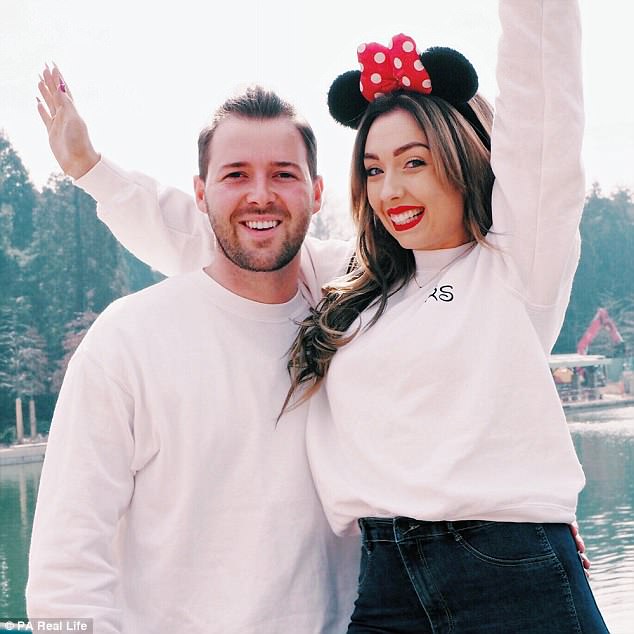 Hopes to start a family

Megan started chemotherapy on February 20 this year, which involved a cycle of eight days of treatment, followed by six days off.

Speaking of being given the all clear, Megan said: ‘It was such amazing news.

‘I always knew I wanted to start a family and once we were married we had it all planned out.

‘We own our own home and, with my husband running my parents’ business, we were settled and ready to move to the next stage of becoming parents.’