Best and worst cruise lines of 2020 revealed by Which? with Viking Ocean Cruises top and MSC bottom

The best and worst cruise lines of 2020 have been named by Which? – and it’s Viking Ocean Cruises claiming the top spot once again and MSC anchored at the bottom for a second year running.

Viking was awarded five stars in every category while MSC received two or three stars across the board – and an overall customer score of just 57 per cent.

Second in the annual ranking was Saga Ocean Cruises, followed by Azamara in third. Second-bottom of the table was Holland America.

The best and worst cruise lines of 2020 have been named by Which? – and it’s MSC Cruises that is anchored at the bottom of the table for the second year running. Pictured is the MSC Bellissima 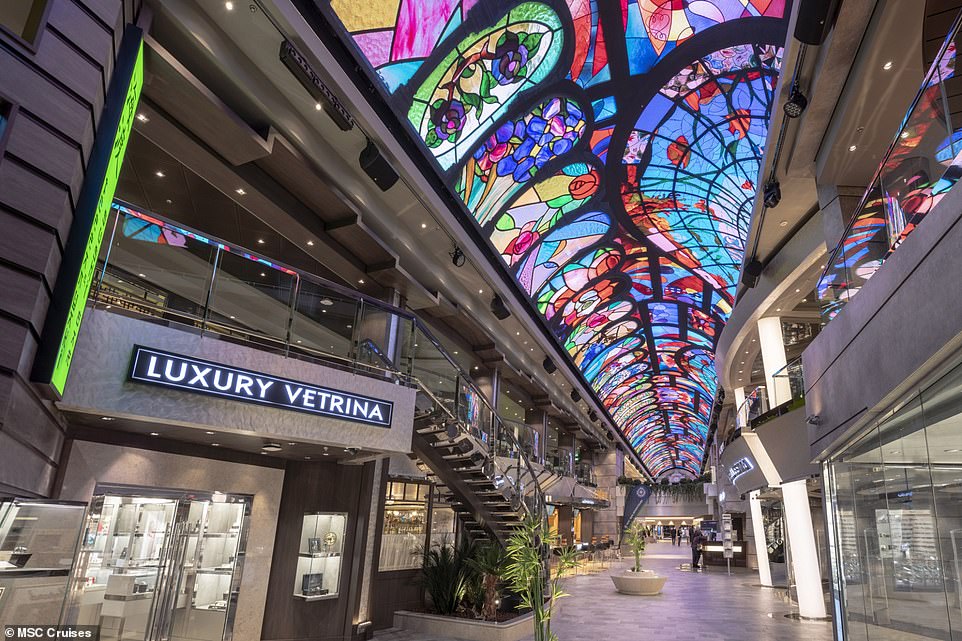 The shopping gallery on MSC Bellissima. Complaints about MSC from customers polled by Which? included poor customer service, surly staff and mediocre food

A table showing the top five and bottom five cruise lines, according to Which? Despite getting five stars in every category, Viking Ocean Cruises did not receive an overall score of 100 per cent. Which? explained this is because it also polled members on how likely they were to recommended a cruise company to friends or family. If the respondent said ‘likely’ rather than ‘very likely’, it would lower the overall score

The research looked at 20 cruise companies and asked 2,253 passengers to rate their experiences out of five across 11 categories.

Those polled were also asked how likely it was that they’d recommend the cruise lines in question to their friends and family.

MSC can carry almost 6,500 passengers at any one time across its fleet of 19 mega-liners. But Which? says this scale posed a problem.

One passenger summed up the complaints of many by telling the consumer watchdog: ‘The ship was huge, with a lot of people, resulting in queues at key times – like meals and entertainment.’

To make matters worse, one holidaymaker reported to Which? that they felt they had to ‘cheer up the staff’.

Which? says another described an unruly scene of people ‘smoking on decks where it wasn’t permitted’ and throwing cigarette ends everywhere. This led to a two-star social atmosphere rating.

Food and drink was also rated just two stars, as were port excursions. Cabins were a little better with a rating of three stars, with many describing them as ‘average’ or ‘disappointing’.

Which? also asked holidaymakers if they had had a problem during their cruise – and more than half of those who travelled on MSC said they did.

Which? says that a fifth (19 per cent) of those went on to lodge a complaint. This stands in stark contrast to an average of four per cent across all brands.

Second-bottom Holland America had a customer satisfaction score of 68 per cent and mainly received two and three stars across the categories. However, it scored four stars for its itineraries.

At the top end of the table, no other cruise company came close to Viking Ocean Cruises, which carries a maximum of 930 passengers per trip.

Which? says the upmarket, adults-only ships allow holidaymakers to avoid the rowdy bars, casinos and ‘the hard sell’ synonymous with cheaper rivals – resulting in top marks for value for money.

Customers told the consumer champion they appreciated the ‘classy’, ‘crowd-free’ atmosphere with Viking, where relaxation is the focus and a Nordic spa is among facilities on offer.

There are also lecture theatres and jazz lounges. 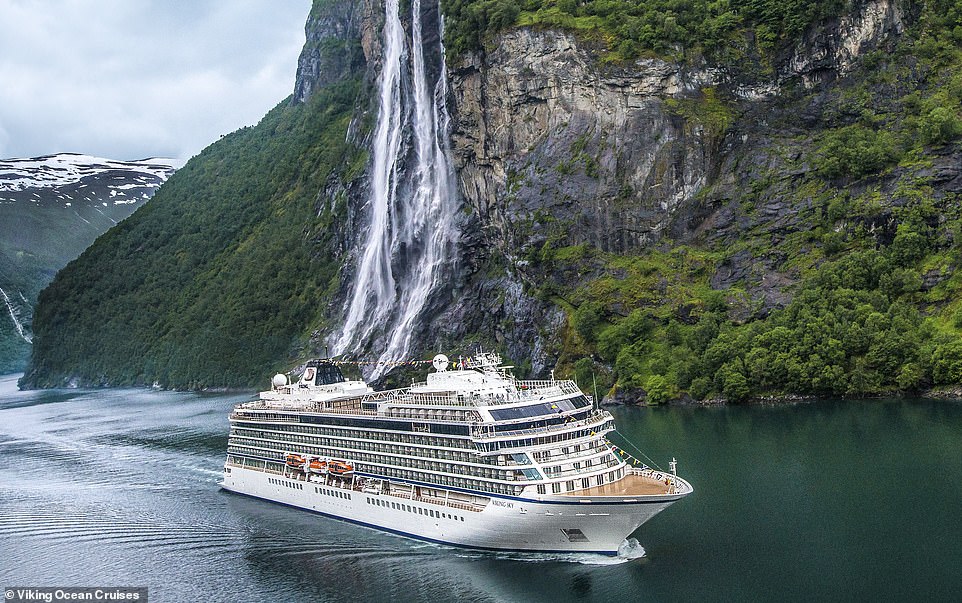 Top-ranked Viking Ocean Cruises was awarded five stars in every category. Pictured is one of its ships, Viking Sky 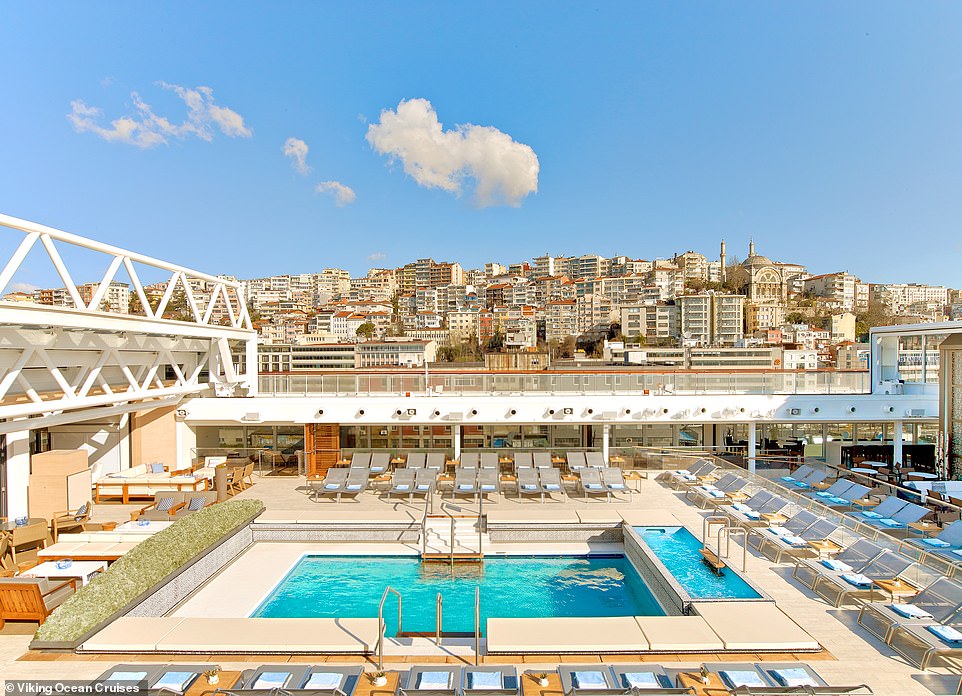 Customers told Which? they appreciated the ‘classy’, ‘crowd-free’ atmosphere with Viking. Pictured is the pool on a Viking vessel

Second-place Saga Cruises had a customer satisfaction score of 88 per cent and scored five stars in six categories including customer service, food and drink, social atmosphere and value for money.

It only scored less than four stars in one category – onboard facilities, where it received three.

Its lowest scores were three stars, which it received for onboard facilities, port excursions and entertainment.

Meanwhile, almost a quarter of those responding to the Which? survey had cruised with P&O in the past two years.

Many of those were loyal customers who kept going back, helping earn the company a respectable 71 per cent customer score.

With most cruises departing from the UK to the Caribbean, passengers told Which? they liked the ease of flight-free travel with P&O as well as the absence of set dining times. The comedy acts also got a thumbs up, described as ‘straight from the 1970s’.

But several repeat travellers complained to Which? that standards have slipped and that it’s become a ‘downmarket company, priced accordingly’ and akin to ‘Butlins on sea’. 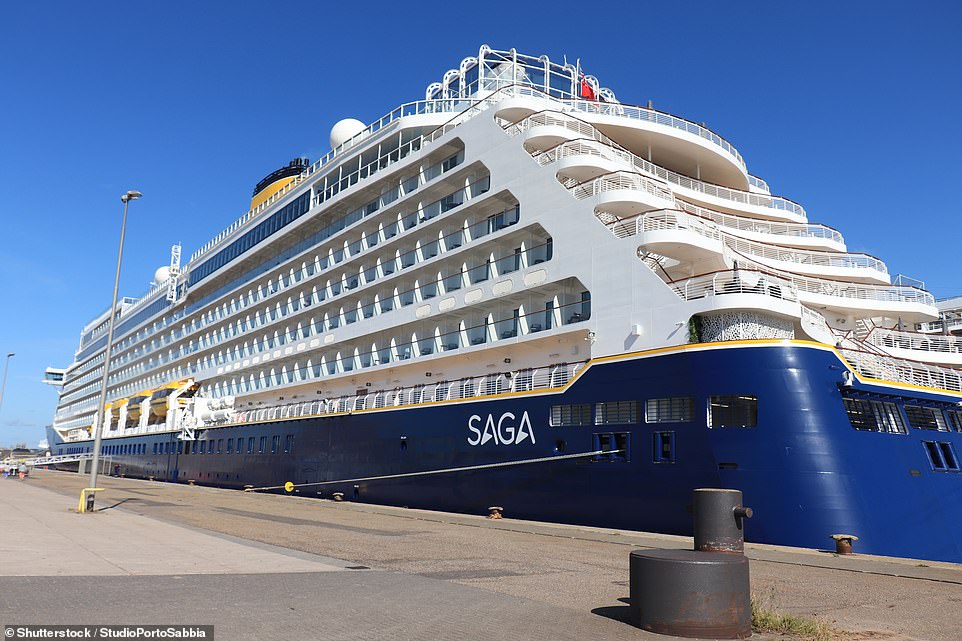 Second-place Saga Cruises had a customer satisfaction score of 88 per cent. Pictured is its new ship, Spirit of Discovery 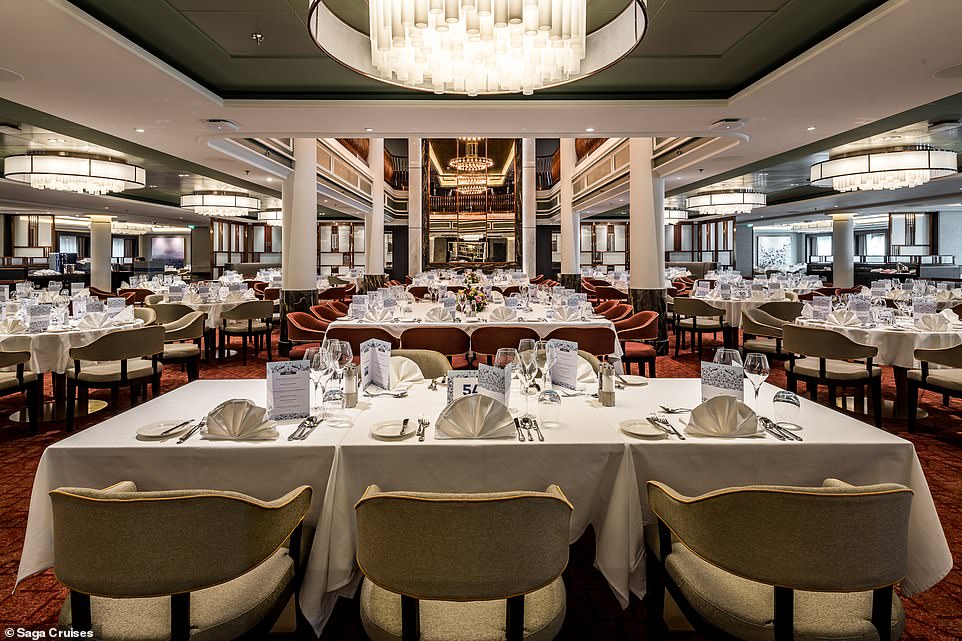 One of the dining rooms on Saga’s Spirit of Discovery. The cruise line scored five stars in six categories including customer service, food and drink, social atmosphere and value for money

The lowest star rating for P&O was for the social atmosphere, with a few of those surveyed describing the pool area as being ‘overrun’ and ‘a nightmare’. There were also expensive add-ons, including WiFi costing £6.75 to £24.95 a day, says Which?

Lesser-known Oceania cruises found itself in the top half of the table with a customer score of 81 per cent.

While headline prices are high, this does include flights and food, and it’s cheaper than other luxury rivals, says Which?

Passengers told the consumer group they were wowed by the 400 staff to 684 passenger ratio, with one revealing the team ‘could not have done more to make us feel like valued guests’.

This Miami-based luxury cruise line focuses on well-being, yoga and fitness but lost points when it came to entertainment. Those looking for a Broadway-style experience were disappointed with the ‘low-key’ acts on offer, says Which?

Researchers also found that several brands with the cheapest tickets had a long, long list of expensive add-ons – from having to pay for excursions and expensive drink packages, to being asked to pay extra for better food – earning these ‘budget’ brands poor ratings.

In contrast, the brands that label themselves as ’boutique cruises’ and mainly offer all-inclusive packages, which sometimes include chauffeur services, private veranda as well as excursions and ad-hoc drinks and snacks, fared far better overall. 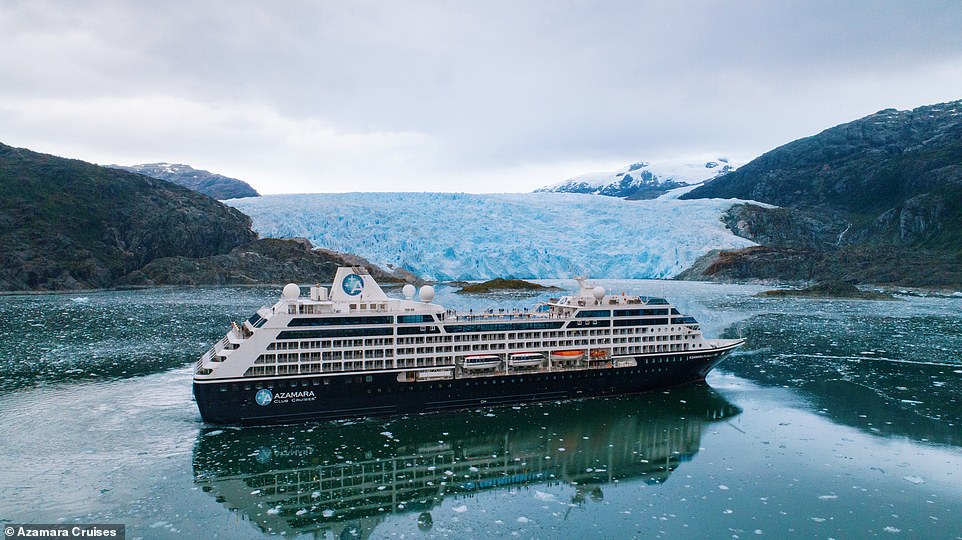 Third-place Azamara had a customer satisfaction score of 87 per cent. Pictured is one of the cruise line’s ships 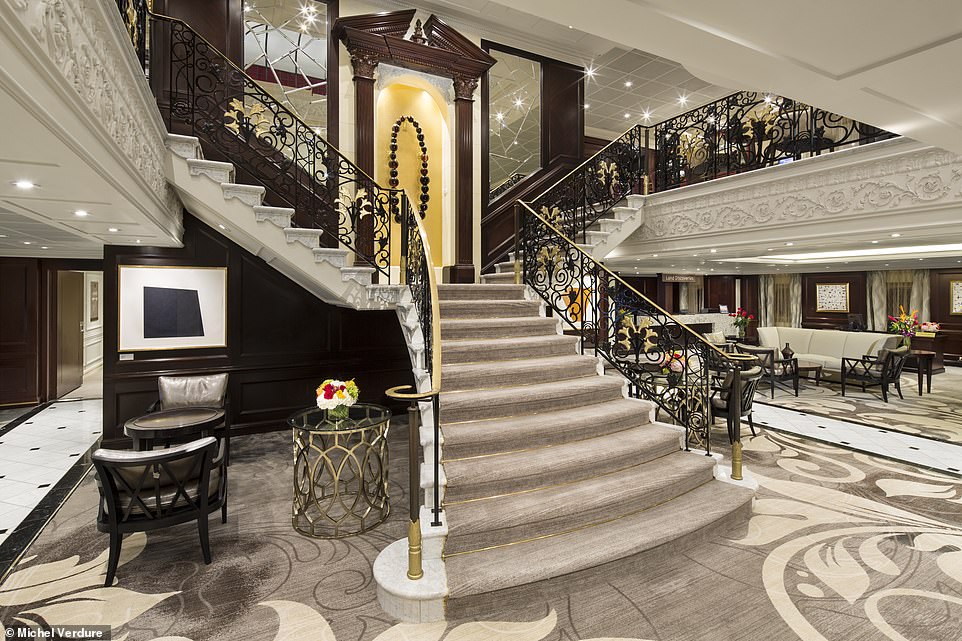 Rory Boland, Which? Travel editor, said: ‘Cruises shouldn’t be about long queues, expensive extras and rubbish excursions, especially when you’ve already forked out thousands of pounds for your trip and have limited choice about how you spend your time and money on board.

‘Bargain headline prices often mean dubious add-ons once you set sail. A far better experience was had by those who paid for an all-inclusive cruise where pricier upfront tickets will give you peace of mind and might actually leave you paying less overall.’

A spokesperson for MSC Cruises told MailOnline Travel: ‘We are of course disappointed that this survey of Which? customers has shown some dissatisfaction with our product. However, we are sure that the small sample size of 67 passengers is not representative of our overall passenger experience given that in the UK market alone we have seen a 37 per cent increase in passengers from 2018 to 2019, with a high number of repeat guests.

‘In 2019 over three million people sailed with MSC Cruises across the world. After every cruise, we contact guests for feedback and as a result, create an overall satisfaction score, which is not in line with the Which? findings. In addition, MSC Cruises is an award-winning cruise line, and in 2019 alone we collected over 50 awards around the world recognising the strength of our product.

‘While we are always grateful for feedback, we are constantly working to evolve our product offering and passenger experience.’