Bill Bowtell on COVID-19: Why Scott Morrison’s plans are not enough

Prime Minister Scott Morrison’s coronavirus plans are ‘so far behind … it’s not funny’ and should have been introduced a week ago, a leading infectious diseases expert said.

Adjunct Professor Bill Bowtell, from UNSW’s Kirby Institute of Infection and Immunity, has put forward a radical blueprint for fighting COVID-19 – and delivered a scathing verdict on the government’s policies.

Mr Morrison on Wednesday announced a ban on indoor gatherings of more than 100 people, unprecedented ‘do not travel’ advice and the lifting of restrictions on 20,000 student nurses.

But Dr Bowtell said the country remains on track to follow Italy’s dreadful plight: ‘All of this should have been done a week ago. It wasn’t.’

‘The advice on gatherings is way out of date … We’re on the trajectory for the Italian outcome. We have been trying to say it for weeks.’

The medical expert – who unloaded on the government’s policies on the ABC’s Q&A program this week – said the government’s response was still no better than it had been a week or even months ago.

That was hotly disputed by government sources, who said the measures were fashioned with advice from leading virologists and epidemiologists – and took time to design.

In light of Prof Bowtell’s scathing criticisms, Daily Mail Australia asked the doctor what his blueprint for the nation would be to stopping the virus. Here’s what he had to say. 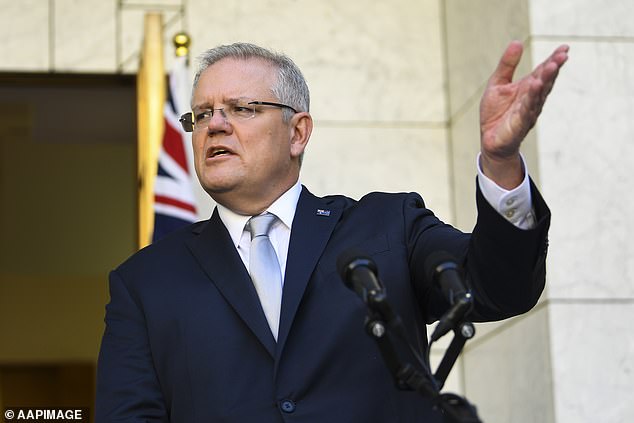 Prime Minister Scott Morrison announced a series of measures to fight the coronavirus crisis on Wednesday, including a ban on indoor gatherings of more than 100 people

Ramp up testing – and no special treatment

The country must ramp up its testing and follow the model of countries such as South Korea, Prof Bowtell said.

They’re rushing in tests now because they didn’t get on Amazon.com in January and order ten times as many

Korea alone has tested more than 270,000 people since the outbreak began, according to Science magazine. It appears to be managing the outbreak well.

‘They’re rushing in tests now because they didn’t get on Amazon.com in January and order ten times as many.’ 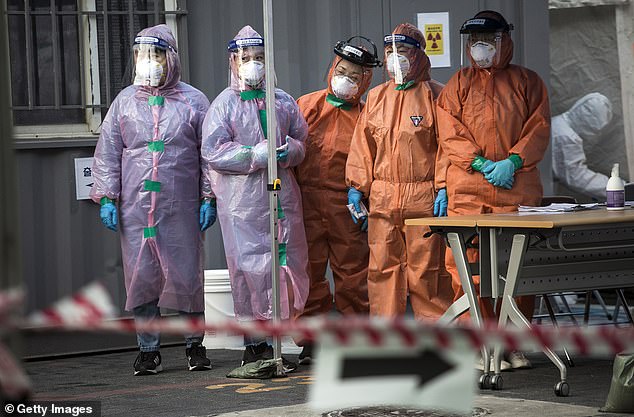 He argued the government must be less secretive about how many test kits there are in Australia, and the areas of the nation that are short.

‘We have to know the truth about the tests and we have to test more,’ he said. 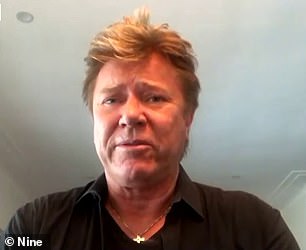 ‘We should know how many test kits there are in Australia,’ he said.

‘We should know the regions that have run out of test kits.’

Meanwhile, Prof Bowtell said the country also must be consistent in how it treat patients who need to be tested.

A Health Department spokeswoman told Daily Mail Australia the government ‘agrees that there should be no special treatment for people getting tests quicker than others.’

‘Clinical urgency and the risk/likelihood of a positive result should be used to prioritise testing in periods of excess demand.’

Rationing – and cops at the supermarket and clinics

Authorities need to ‘impose order and discipline’ to the panic buying crisis, Prof Bowtell said, with police helping enforce the rationing of goods.

‘We have to accept there’s got to be rationing,’ he said.

‘The police have to be present at the supermarkets and the hospital waiting rooms.

‘If you go to the supermarket you’ve got to be told, you can have one pack of this, one tub of butter… and if you’ve got any problems go see the cop in the corner?’

‘We have to accept the market economy as we’ve known it has ceased to function, and we have to take order and control.’ 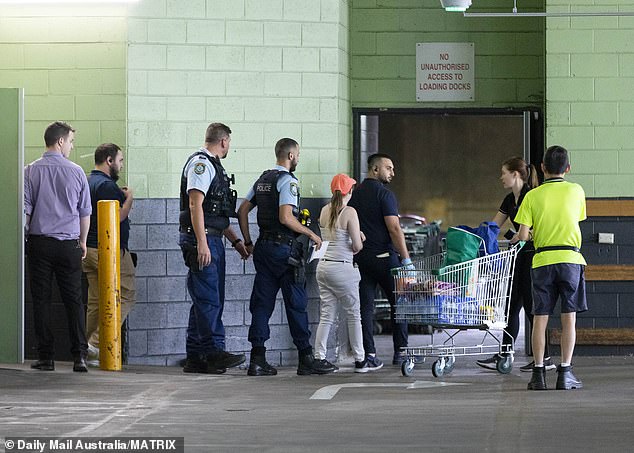 Prof Bowtell says there should be a police presence at supermarkets. Above, officers at Westfield Parramatta following an alleged stoush over toilet paper 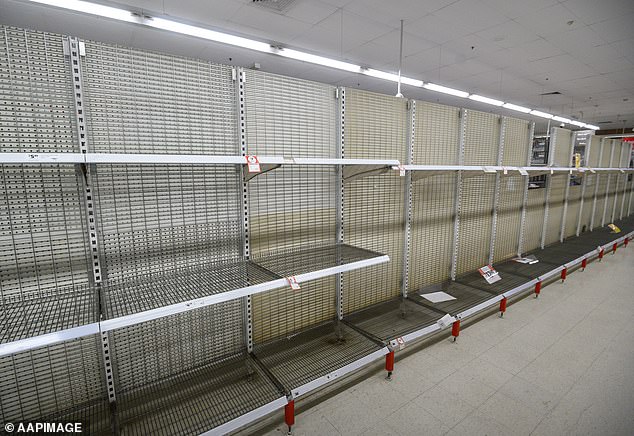 The major supermarkets, Coles and Woolworths, have already imposed strict limits on purchases of some products, including staples such as toilet paper, pasta and rice.

Coles and Woolworths have introduced dedicated shopping hours for the elderly and disabled from 7am to 8am, which has been popular.

Mr Morrison demanded Australians ‘stop hoarding’ on Wednesday and said it was one of the most ‘disappointing’ aspects of Australian behaviour he had seen.

‘Stop hoarding … Stop doing it. It’s ridiculous. It’s un-Australian and it must stop,’ he said.

Shut down the schools except for those who need it

Schools should be ‘scaled back’ to encourage social distancing. But staff should still be available so children can be supervised, Prof Bowtell said. 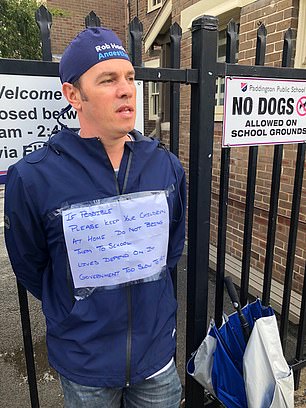 ‘When I say the schools should be shut down, all the children and the parents who can make arrangements to drop them at home should be fine,’ he said.

‘But I don’t think the schools should shut down as physical institutions – certainly there should be some way of caring or looking after children (at the school) if parents for one reason or another can’t take responsibility for them during the day.’

He said Singapore – which has had success in limiting the virus – had not shut their school system.

‘I am telling you that, as a father, I’m happy for my kids to go to school,’ he said.

He said closing schools would have a ‘severe’ economic impact, forcing up to 30 per cent of health workers to have to stay home.

‘There is a national public interest here in keeping schools open and our advice is that is not being done at the detriment at the health of any child,’ he said.

The only reason kids shouldn’t go to school is if they’re sick, he said.

The government is busy preparing a second stimulus package, after already announcing $17 billion in measures to brace the economy from a terrible shock.

But Prof Bowtell argued radical measures should be taken amid government warnings that businesses will close and people will lose their jobs.

He said the Federal government should essentially ‘freeze’ the economy in place, as best it can.

‘Companies need money to pay wages, and they need that unlimited,’ he said. 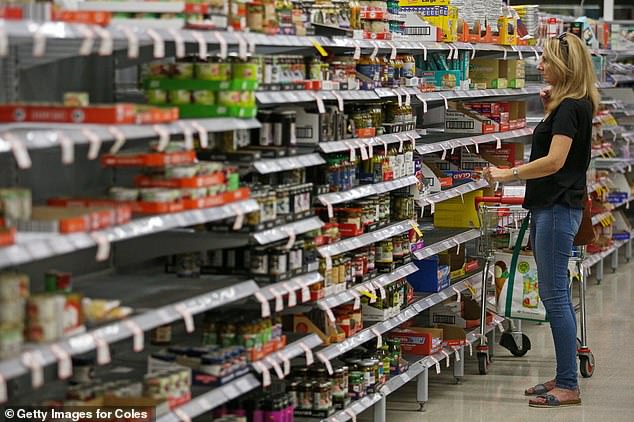 ‘The Federal Treasury’s got to go to them and say … what’s your wages bill? You’ve got that going forward’.

‘Freeze the economy in place, pump it up with money – and let’s see where we get to in two or three weeks time’.

Don’t ‘lockdown’ – come down together as a country

Prof Bowtell said talk of a lockdown is ‘just so much rubbish’.

The term implies ‘police or cyborgs going around’ preventing people from going outside, he joked.

‘The only thing we can do is explain truthfully to the Australian people the mess we are now in,’ he said.

Australians must mobilise their families, their households, apartment biuldings and their streets and ‘put together order and discipline’, he said.

Prof Bowtell said Australians should be pulling together initiatives as Sydney MP Alex Greenwich is suggesting.

Mr Greenwich is making a list of electorate restaurants offering direct delivery and take-away during the crisis.

Prof Bowtell said the bottom line was: ‘We’re going to have to have a new way of doing things for awhile’.