Treasury Secretary Steven Mnuchin’s claim that the U.S. economy will rebound by summer is being flatly contradicted by billionaire Barry Diller and other Wall Street analysis.

‘There’s no chance. I mean certainly [by] this summer,’ Diller told CBS ‘Face the Nation’ on Sunday.

Diller serves as chairman of Expedia, one of the many online retailers that have been battered by the response to the coronavirus, in its case because of the cratering of the travel industry. His other ventures include Match.com, Tinder, Vimeo and HomeAdvisor.

He slammed Trump for his response saying the questions over how the country gets back to business need to be answered.

‘Unfortunately, we have a witch doctor as a president and he ain’t going to tell us,’ he said.

‘But the science part of it, I think that has to be translated into more practical solutions.’

‘Witch doctor as a president.’ Billionaire Barry Diller told CBS’ Face the Nation that Donald Trump’s claims of a recovery being imminent were bogus 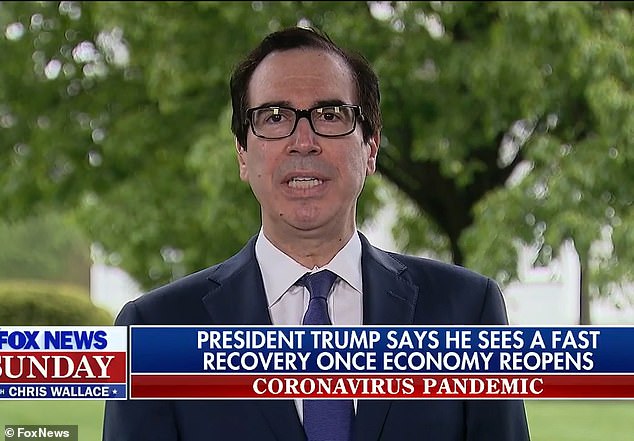 Diller ridiculed the idea of an economy ready to bounce back which was pushed again Sunday by Steve Mnuchin, the Treasury secretary, and which Trump has voiced repeatedly, claiming there is ‘pent-up demand.’

‘To anyone who thinks that this economy is going to bounce, I mean you’d have to have the idea of a rubber ball not in existence to think it’s going to bounce high,’ Diller said. ‘It can’t. The damage that’s being done is catastrophic.’

Diller – a longtime Democratic supporter – said the summer would be a ‘petri dish of all sorts of things,’ with all sorts of experimenting going on.

He said the period would be a ‘big mess, and by September possibly I think, you’ll see things – some things – economically return.

‘You have to have widespread bankruptcies because you have no revenue essentially for an enormous number of businesses.’

He said Expedia went from $250 million in sales a day to ‘basically zero.’

Amid growing reporting about problems in the government’s Paycheck Protection Program, Diller called for even ‘sloppy’ efforts to get support out the door quickly. 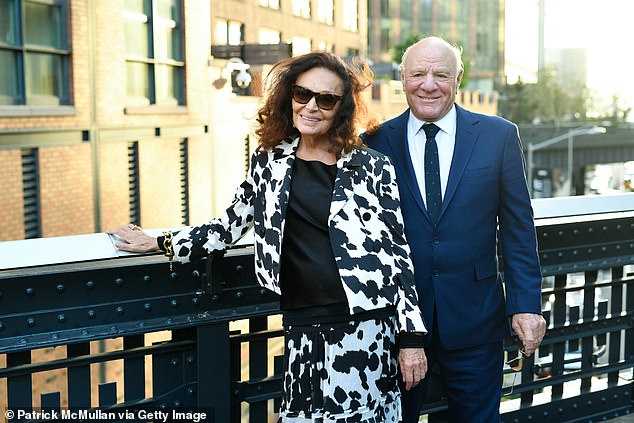 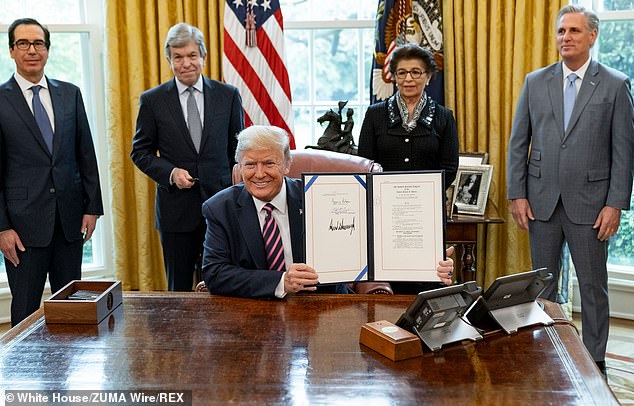 Mnuchin has pointed to the trillions in funds the government has been pushing to aid Americans and U.S. businesses

‘You’re going to have a massive amount of businesses that can’t return, businesses that go bankrupt. It’s inevitable. And hopefully, the government will, so to speak, pick up the tab, because this is an existential crisis and we shouldn’t worry so much about doing it in a neat way. It ought to be sloppy to get that money out to everybody who needs it,’ said Diller, who is also chairman of IAC/InterActiveCorp.

His comments came on a weekend when Mnuchin voiced more optimism about the economy.

‘I think as we begin to reopen the economy in May and June you’re going to see the economy really bounce back in July, August, September,’ Mnuchin predicted on ‘Fox News Sunday.’

He pointed to a series of bailouts totaling $4 trillion that have moved through Congress.

‘We are putting an unprecedented amount of fiscal relief into the economy,’ said Mnuchin. ‘You’re seeing trillions of dollars that’s making its way into the economy, and I think this is going to have a significant impact.’

Trump has repeatedly offered his own sunny predictions, even as a top economic advisors said unemployment might hold at 16 per cent.

The nonpartisan Congressional Budget Office came out last week with a gloomy forecast that showed the nation’s GDP shrinking by 5.6 per cent for the year with 12 per cent unemployment. Goldman Sachs is also forecasting a steep downturn.

Mnuchin, who has negotiated the relief packages with Democrats in Congress, responded: ‘This is not the Financial Crisis. This is a scenario where we’ve closed the economy and we’re going to open the economy. So all these models are based upon health assumptions, how quickly we reopen, so we’ll see.’

Mnuchin continued: ‘My own opinion is, again, we have unprecedented amount of liquidity in the system. We’re very sympathetic to all the people that are out of work. But there is enhanced unemployment, there’s the PPP, there’s direct deposits. This is going to put a lot of liquidity. And as businesses begin to open you’re going to see demand side of the economy rebound.’