Bills’ Zay Jones arrested after naked scuffle with his brother

Buffalo Bills wide receiver Isaiah ‘Zay’ Jones was arrested on Monday after he stripped naked, kicked a hole through an apartment window and got into a scuffle with his brother.

The disturbing incident was caught on video and shows the naked NFL player run out of a downtown Los Angeles apartment into the hallway saying he wants to ‘fight for Jesus’.

Jones’ brother, Vikings wide receiver Cayleb Jones, tries to stop the 22-year-old and tells him to put some clothes on.

Zay Jones, a wide receiver in the NFL, was arrested for vandalism after a naked scuffle with his brother and kicking a hole in an apartment window 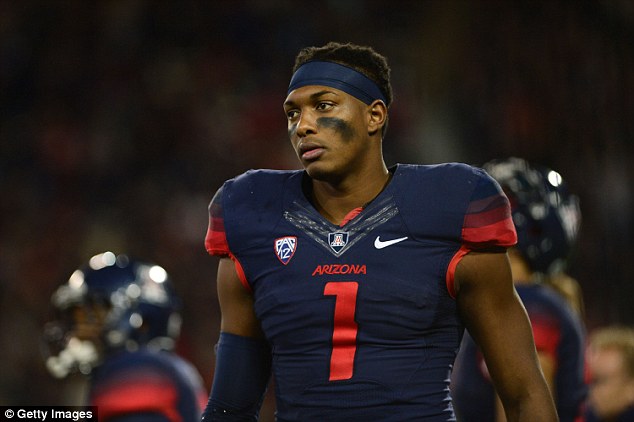 Cayleb Jones, who plays for the Vikings, was seen in a video trying to calm his brother down and get him to put some clothes on

‘I wanna fight for Jesus,’ Jones says in the video, posted by TMZ. ‘Jesus is that way?’

Cayleb, 24, then blocks the hallway trying to keep his brother from taking off and the siblings get into a scuffle.

Jones eventually pushes past Cayleb and runs towards Cayleb’s girlfriend’s apartment, according to TMZ. The woman is heard screaming in the background.

Another video shows blood splattered on the walls and floor in the hallway.

‘You got to kidding me. It does look like a f***ing murder scene,’ the woman filming says. 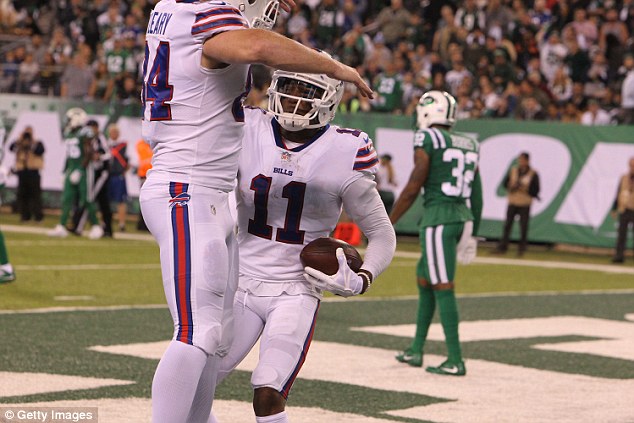 At the end of the hallway a large broken window is boarded up.

TMZ reports that Jones kicked a hole in the window and then tried to climb through the broken glass.

A witness told the outlet that Cayleb was allegedly trying to stop his brother from jumping out a 30th floor window. Cayleb was able to restrain Jones until police arrived, the witness said.

Police said Tuesday Jones, the Bill’s second round draft pick last year, was arrested for felony vandalism. He’s being held in the medical ward of the Los Angeles County Jail.

It’s not clear what condition he is in.

The Bills released a statement saying they were gathering more information on the incident.

‘At this point, we will have no further comment,’ the Bills said.