When Nick Clegg and his wife Miriam revealed that their son had been diagnosed with blood cancer, it shone a light on a disease that affects nearly a quarter of a million people in the UK.

Yet many know little about it — a lack of awareness which means patients can struggle to get diagnosed.

The couple’s eldest son, Antonio, was just 14 when, last September, he noticed a lump in his neck and chest. He saw a GP, who quickly realised that it could be something more serious.

When Nick Clegg and his wife Miriam (pictured on the Lorraine show) revealed that their son had been diagnosed with blood cancer, it shone a light on a disease that affects nearly a quarter of a million people in the UK

Antonio was diagnosed with Hodgkin lymphoma, a form of blood cancer that affects the infection-fighting white blood cells known as lymphocytes.

After several rounds of chemotherapy and taking up to 20 tablets every day, the teenager is now on the road to recovery.

Yet too often patients with blood cancer aren’t spotted quickly, or don’t receive the best treatment.

Awareness is a key issue. Unlike the four more common cancers — breast, lung, bowel and prostate — blood cancer gets relatively little attention, even though almost 38,000 new cases are diagnosed each year. 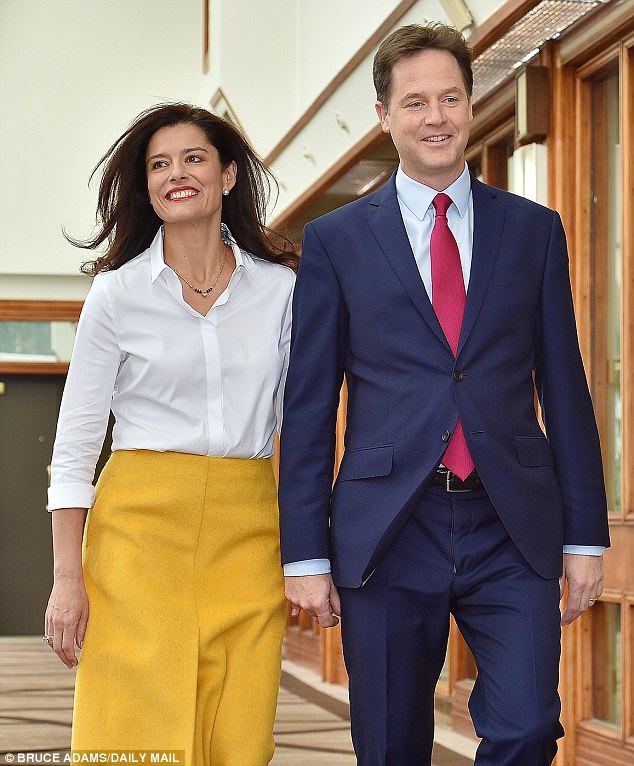 Their son Antonio was diagnosed with Hodgkin lymphoma, a form of blood cancer that affects the infection-fighting white blood cells known as lymphocytes. Pictured: Nick Clegg and his wife Miriam at the Liberal Democrat Party Conference in 2014

Just 12 per cent of people know that blood cancer is one of the five most commonly diagnosed cancers, according to a poll for the Make Blood Cancer Visible campaign last month.

Diana Jupp, director of patient services at the blood cancer charity Bloodwise, says: ‘Despite 230,000 people being affected by blood cancer across the UK, it is still a much misunderstood and little-known disease area.

‘We know low awareness can lead to late diagnosis, which in some blood cancers, like myeloma, means symptoms can worsen and be harder to treat.

‘It can also make it hard for people to find the information and support that they need.’

Exacerbating this is the fact that some symptoms, such as fatigue, can be vague, making the condition difficult to diagnose.

Blood cancer is an umbrella term for cancers that affect the blood, bone marrow and lymphatic system (a network of vessels and glands that are an important part of the immune system).

There are three main types, lymphoma (Hodgkin and non-Hodgkin), leukaemia and myeloma, and over 130 other rarer types.

Doctors don’t really know what causes the majority of blood cancers. However, in each case, blood cells start to divide in an uncontrolled way, fail to mature and die, leading to an over-production of abnormal blood cells.

Symptoms are often very vague: fatigue, fever or night sweats, recurrent infections, weight loss, bone and joint pain, bruising, unusual bleeding from the gums and nose, or a rash on the legs identical to a meningitis rash (small red dots which don’t blanch when a glass is rolled on them), caused by blood vessels leaking in the skin.

As Dr Graham Collins, a consultant haematologist at Oxford University Hospitals, explains: ‘The symptoms are very vague and can mimic lots of other diseases, so it can be a real challenge to spot —especially as a GP may see only a handful of cases in their career.’

For this reason, many people are diagnosed purely by chance following a routine blood test, or not until the disease is advanced.

(Lymphoma, as the Cleggs’ son had, is slightly different because patients often get lumps caused by a build-up of cancerous white-blood cells in the lymph glands.)

Yet even with early detection, treating it can be complicated.

SYMPTOMS TO WATCH OUT FOR

Symptoms of blood cancer are often very vague. They can include:

In some cases, blood cancers can be cured (80 per cent of children with acute lymphoblastic leukaemia are cured), while for other patients it remains incurable but they can live with it. (A patient with a low-grade form of non-Hodgkin lymphoma, for example, may not even need treatment.)

But one in five myeloma patients dies within two months of being diagnosed.

Because blood cancer affects the entire body and cannot, like other cancers, be surgically removed, patients are reliant on chemotherapy. But accessing the latest chemotherapy drugs is a problem for UK patients with blood cancer, says Dr Collins.

‘New chemotherapy drugs are coming on stream all the time, and we have made real progress in the treatment of some forms of the disease.

‘Whereas in the Fifties, patients died of Hodgkin lymphoma, it can now be cured in 80 to 90 per cent of people, even in advanced cases, with up to six months of treatment. It’s one of the real success stories of modern medicine.

‘However, with other types of blood cancer, like myeloma, there is still a long way to go.

‘And while new drugs don’t always mean better drugs, the UK falls behind the U.S. and the rest of the world when it comes to accessing new (and often expensive) chemotherapy drugs for these patients.

‘We are not currently giving myeloma patients the best possible treatment. It is very frustrating and people are dying needlessly early because of this.’

Bob Munro, 57, a former businessman from Windsor, who was diagnosed with myeloma five years ago, is only too aware of his limited treatment options.

Bob, who now works part-time for a disability social enterprise, was diagnosed with the disease after suffering flu symptoms, a nosebleed and blinding headache while skiing in France.

‘I felt terrible but thought I was just run down because I was working long hours,’ he says.

Once they got home, his wife Linda, 58, took him straight to A&E, where he was diagnosed with pneumonia.

Tests at a private hospital revealed severe anaemia, requiring immediate blood transfusions, while further investigations found that he had myeloma.

‘The consultant told me that myeloma was incurable but treatable, and not to look it up online,’ says Bob, who has two sons, Ross, 30, and Joe, 26.

‘I was in total shock. It never occurred to me the symptoms could be cancer, and, like most patients, I’d never heard of myeloma before.

‘Thinking back, though, I’d probably been having symptoms for two to three years. I’d had chest and gastric infections I couldn’t shake off, backache, and I was often extremely tired.

‘I’d been to the doctor and all the signs were there but no one ever joined up the dots.

‘While these common ailments are hard for a GP to connect to make a diagnosis, a simple blood test would have detected the low blood counts, suggesting anaemia and a compromised immune system.’

Bob’s treatment involved much trial and error. ‘In the first 12 months, I tried four drug combinations, none of which worked for me, but had terrible side-effects,’ he says. ‘I lost the sight in one eye and have nerve damage to my feet.

‘I then found a new drug that worked for me. However, three and a half years later, that stopped working. Since the beginning of this year, I have been on a new type of immunotherapy drug.

‘It’s a strange experience: you know at some point the drug is going to stop working, but you don’t know when.

‘There have been huge improvements — if I had been diagnosed ten years earlier, I would be dead by now — but like the majority of myeloma patients, I will eventually run out of options.

‘Joining a trial is one option, or failing that, we would sell our house to pay for treatment in the U.S., which I appreciate is not an option for many people.’

Although it has been a struggle with constant fatigue from the drugs, Bob is determined to stay positive and has taken up cycling to keep healthy, twice cycling to Paris to raise money for research into the cancer.

Dr Collins advises that if you find a lump or have persistent symptoms such as a cough or tiredness, it is always best to get them checked out with your GP.

‘While early diagnosis is key for cancers such as breast and bowel, for some blood cancers it is a lot less clear,’ he says.