Horrifying images show a sword twitching up and down in a bull’s back as its dying body convulsed at Spain’s first bullfight since lockdown.

The gruesome spectacle was filmed in Avila, 55 miles west of the Spanish capital, Madrid.

It has unleashed a fresh storm of outrage at the bloodsport, with campaigners demanding an end to bullfighting amid a surge of coronavirus cases in the country.

Carmen Ibarlucea, from animal rights group La Tortura No Es Cultura (Torture Is Not Culture), said: ‘Have we not already had an overdose of death and pain in these past months?’

The gruesome spectacle was filed in Avila, 55 miles west of the Spanish capital, Madrid. Pictured, moments before the sword was impaled in the bull’s back

The barbaric scene was recorded by activists from Torture Is Not Culture and Animal Guardians.

It shows blood pouring out of the dying animal’s mouth as the matador continued to bait it.

A sword was impaled in the bull’s back, with blood spurting out as the blade rose and lowered with each pulse.

The matador stood back and watched as the animal suffered a slow and excruciating death in front of him. 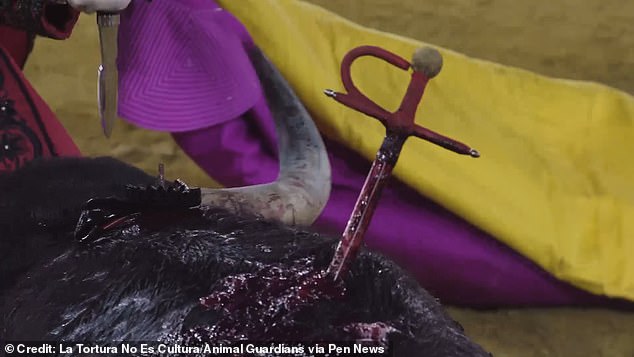 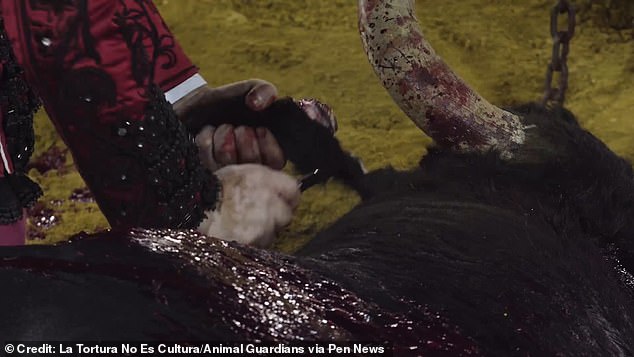 Its hoof is cut off as a keepsake, a tradition if the crowd is happy with the matador. The bull’s ears and tail or a hoof may be cut off and presented as a gift

Blood shot out of the bull’s nose and it staggered around the arena as its wounds slowly killed it.

Making its way to the edge of the ring, the bull collapsed to the ground, causing a cheer in the audience.

One of the matadors had half his trousers, known as taleguilla, ripped off as he impaled the animal with a sword.

The footage also revealed the bullring was less than half full, with large parts of the terraces holding only a handful of spectators and the upper tiers abandoned on all sides. 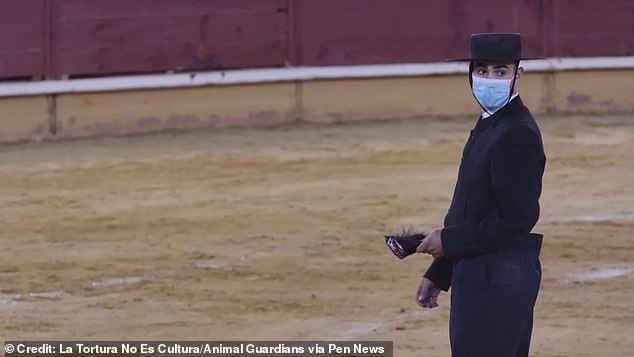 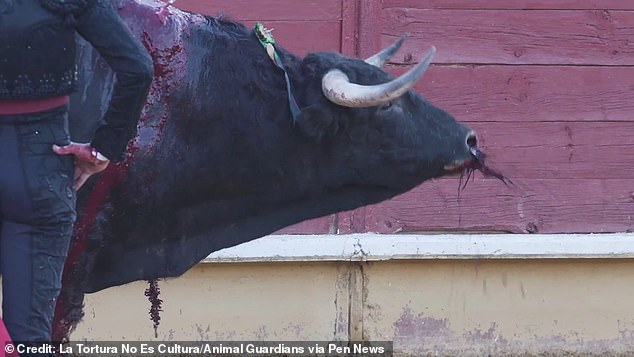 The matador gave a final blow with a small knife to the bull’s head, but the animal continued to writhe as it slowly died.

Its hoof was then cut off as a keepsake – a tradition if the crowd is happy with the matador. The bull’s ears or tail may also cut off and presented as a gift.

A few moments later another bull is let into the ring for another fight.

She said: ‘The bullfighting lobby has been clamouring for months, asking for public money and demanding to be able to hold a bullfight.

‘And what happened? It has been a total failure, the alleged fans have not responded.’ 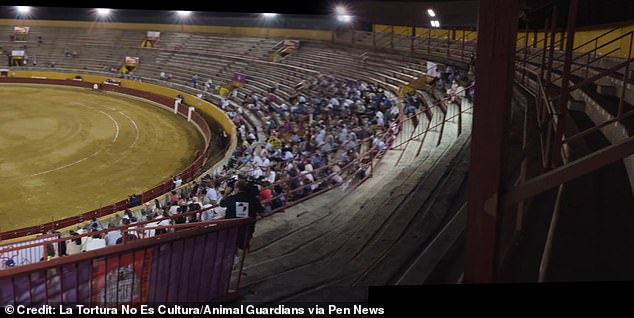 The footage also revealed the bullring was less than half full, with large parts of the terraces holding only a handful of spectators and the upper tiers abandoned on all sides

Lockdown has hit bullfighting hard and the bloodsport’s bosses have been vocal about the need for government subsidies if it is to survive.

But the practice already receives public money from both national and local governments, while farms raising animals for the bullring have been shown to receive EU cash.

Mrs Esteban continued: ‘How can this cruel bankrupt business continue to be subsidised with public funds?

‘This is a waste of Spanish and Europeans taxes at a time of great need.’

Carmen Ibarlucea added: ‘The numbers speak for themselves: in Spain, those of us who reject bullfighting are a large majority. 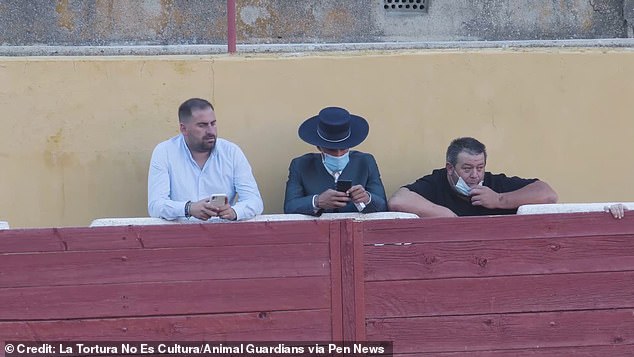 It has led the UK government to reimpose mandatory quarantine for everyone arriving from Spain, forcing British holidaymakers to self-isolate for 14 days on their return home.

Spain receives more tourists from the UK than from any other country, and tourism accounts for 11 per cent of the country’s GDP, so the return of quarantine comes as another blow to its economy.