Body of man, 23, found ‘hanged, drugged and stuffed in a suitcase floating in the San Francisco Bay’

Body of man, 23, is found ‘hanged, drugged and stuffed in a suitcase floating in the San Francisco Bay’ before 47-year-old is arrested over killing ‘which was caught on video’

A 47-year-old man has been accused of drugging, torturing and murdering a man found stuffed inside a suitcase dumped in the San Francisco Bay earlier this month.

Gerald Rowe was arrested on Friday in connection with the murder of 23-year-old George Randall Saldivar.

Grisly details of the slaying were laid out in a motion filed in San Francisco Superior Court by the district attorney’s office on Monday.

Prosecutors claim to have a video found at Rowe’s home that shows him and a co-conspirator hanging a rope around Salvidar’s neck, injecting him with fentanyl and then abusing him after he passed out.

Rowe is now facing 10 charges including murder, torture, kidnapping, conspiracy, battery with serious bodily injury, false imprisonment, possession of a firearm by a felon and three counts of drug possession.

It is unclear whether the second person seen in the video has been identified by authorities.

Gerald Rowe, 47, was arrested Friday for the murder of 23-year-old George Randall Saldivar, whose body was found floating in the San Francisco Bay off Pier 39 (file photo above) on February 18. Prosecutors claim to have video of Rowe and a co-conspirator hanging Saldivar with a rope, injecting him with fentanyl and abusing him at the defendant’s home

Saldivar’s body was discovered inside the suitcase floating in the Bay near Pier 39 on February 18.  A medical examiner determined that he had been murdered and contacted police.

An investigation led authorities to an apartment registered to Rowe on the 1272 block of Market Street, where the video was recovered, Assistant District Attorney Michael Swart wrote in the motion obtained by The San Francisco Chronicle.

The footage recorded between February 3 and 5 allegedly shows Rowe and another person, whose gender has not been indicated, engaging in ‘consensual sexual activity’ before Salvidar arrives at the front door of the home.

Prosecutors say Salvidar can be seen entering the home and sitting in a chair as one of the suspects ties his hands behind his back.

Assistant District Attorney Michael Swart wrote: ‘The unnamed co-conspirator and defendant Rowe make a noose and put the noose over the victim’s neck.

‘The rope is then elevated over an unknown object in the room by defendant Rowe and the unnamed co-conspirator.’

Both of the suspects then tug on the rope, place a bag over Salvidar’s head and inject him with what is believed to be fentanyl, an opioid 50-100 times more potent than heroin.

After Salvidar collapses, the suspects put him on a bed and begin slapping him. 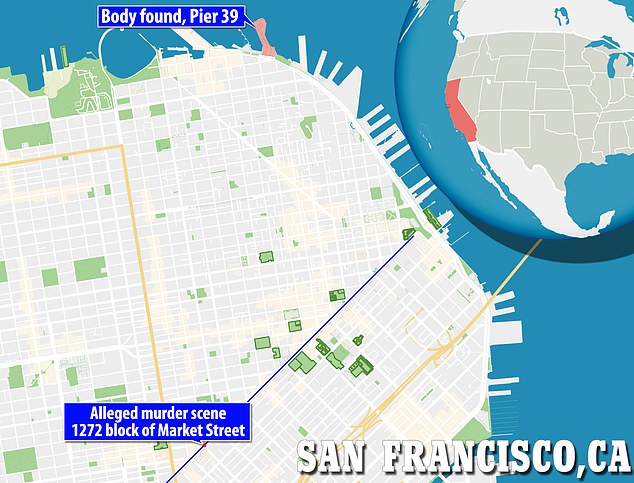 The unidentified co-conspirator then pulls a suitcase out of a closet and they put the victim inside before sealing it in plastic.

‘Defendant Rowe then eats junk food and plays his guitar over the suitcase,’ Swart wrote.

The suspects push the suitcase to the corner of the room where it sits for an entire day as they ‘go about their business’, according to the motion.

Then at 2.30am on February 5, the pair could allegedly be seen rolling the suitcase out of the room and onto Market Street.

Investigators have not yet identified a motive in Salvidar’s killing.

Rowe is scheduled to appear at an arraignment on Thursday.

The SF Chronicle reported that there were several social media profiles for Salvidar which indicated that he’d graduated from Mission High School in San Francisco.