Benjamin Netanyahu’s chances against his political rival were boosted today after it was revealed Arab parliamentarians withdrew from backing Benny Gantz for Prime Minister.

President Reuven Rivlin invited Nethanyahu and Gantz to meet with him tonight in the hopes of thrashing out a solution to the deadlock following last Tuesday’s election.

The Joint List, a coalition of Palestinian representatives, said they would endorse Gantz on Sunday, appearing to put him ahead of Netanyahu, 57 versus 55.

But Rivlin announced today that three of the Palestinian Balad faction had requested to retract their recommendations. That leaves Netanyahu ahead by one, Arutz Sheva reported.

Neither Netanyahu nor his challenger Gantz, commented as Rivlin brought them together for a photo at the beginning of tonight’s meeting. The two men looked tense and uncomfortable as Rivlin forced a smile.

His office announced late on Monday that he had left the room, with the two rivals left to discuss matters on their own. He stressed to them that the public ‘came out and voted, and now it is your turn’.

Concluding their meeting at Rivlin’s Jerusalem office, Netanyahu and Gantz issued a joint statement saying they had discussed ‘moving forward with unity’. It did not elaborate.

President Reuven Rivlin invited Nethanyahu and Gantz to meet with him tonight in the hopes of thrashing out a solution to the deadlock following last Tuesday’s election.

The president is responsible for choosing a candidate for prime minister after national elections. That task is usually a formality, given to the leader who has the best chance of forming a stable majority coalition in the 120-seat parliament.

But last week’s election ended in deadlock, with neither Mr Netanyahu, who has ruled the country for the past decade, nor Mr Gantz able to put together a coalition with smaller allied political parties.

That has greatly complicated Mr Rivlin’s task, and a unity deal between the large parties is seen as perhaps the only way out of the impasse.

‘People expect you to find a solution and to prevent further elections, even if it comes at a personal and even ideological cost. This is not the time to exclude people,’

Despite Gantz’s slim lead, neither has a clear path to a majority coalition, putting Netanyahu’s long tenure in office at risk. 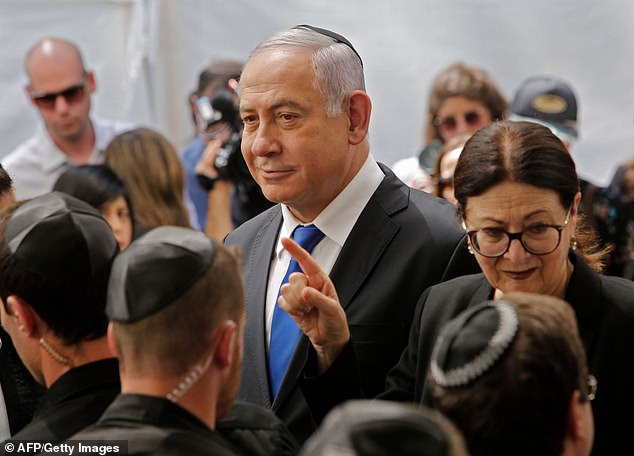 Both Netanyahu and Gantz have also called for a unity government.

Gantz however says he should lead it since his party is the largest.

The standoff has even raised the possibility of yet another election – which would be the third in a year’s time after April polls also ended inconclusively.

Rivlin has said he will do all he can to avoid another election, and Monday’s meeting may see him seek to play a mediator role. 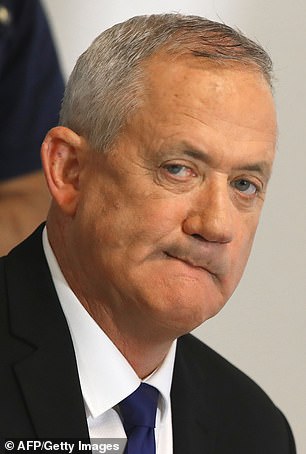 Benny Gantz, leader and candidate of the Israel Resilience party that is part of the Blue and White, political alliance looks on during a press conference in the Israeli coastal city of Tel Aviv on Thursday

Gantz’s endorsement by the Joint List of four small Arab parties had marked a turning point in Israeli politics.

Arab parties have traditionally refrained from endorsing a candidate for PM, and they have never sat in a coalition government, not wanting to be seen as legitimising Israeli policies.

Although many Israeli Arabs remain angry at Gantz for leading the military’s devastating war against Gaza militants in 2014, their fury toward Netanyahu runs much deeper.

Netanyahu’s campaign repeatedly accused the Arabs of trying to ‘steal’ the election, drawing accusations of racism and incitement.

There is also deep-seated anger over a law passed by Netanyahu’s government in 2018 that declared Israel to be the nation-state of the Jewish people. Arabs believe the law codifies discrimination.

Rivlin has not indicated which way he is leading. But he said he interpreted the will of the people as yearning for a ‘stable’ government. ‘And there can’t be a stable government without the two big parties,’ the 80-year-old president said.

Last week’s vote was Israel’s second election in five months. Netanyahu was unable to form a coalition after April’s balloting.

In calling a new election, Netanyahu had hoped to secure a narrow majority of hard-line and religious parties that would grant him immunity from prosecution on charges that could include bribery, breach of trust and fraud. But now that possibility appears to be off the table.

Israeli law does not require a sitting premier to resign if indicted. But if he is charged, as is widely expected, he will come under heavy pressure to step down.