Boris Johnson is asking the European Union to block a further extension to Article 50 in his new Brexit deal, a report claims.

The Prime Minister is to publish a legal document outlining his alternative to the Irish backstop, expected to be sent off as early as this week.

As part of any new agreement, Mr Johnson is understood to require a pledge that the other 27 EU member states will not permit another delay to the UK’s withdrawal.

His plan is to force Parliament into a binary decision, either to accept his new deal or allow Britain to crash out with No Deal on October 31, The Times reports.

Boris Johnson is to publish a legal document outlining his alternative to the Irish backstop, expected to be sent off to the EU as early as this week (pictured: the PM at the Conservative Party conference alongside Home Secretary Priti Patel)

If it goes through, Mr Johnson will have cancelled out the Benn act – his hated ‘surrender bill’ – which was drawn up to prevent No Deal exit.

Those behind the law, including Tory rebels Sir Oliver Letwin and Dominic Grieve, have conceded they cannot force the EU members into granting another delay.

But the Prime Minister’s bold strategy faces brutal hurdles in Brussels amid fears Michel Barnier will immediately try to torpedo his legal text.

The Republic of Ireland is wavering on the idea of limited checks at the border with the North, as ministers prepare for their ‘moment of truth’ in EU negotiations, insiders told The Times.

If, however, the Prime Minister looks like he will succeed there is likely to be clamouring from Remain MPs for the attention of Angela Merkel and Emmanuel Macron.

Indeed France, which expressed doubts over the last delay, was reportedly counselled by those behind the Benn act over its position.

Ministers are understood to have warned Mr Johnson that he will have to seek an Article 50 extension unless he get a new deal.

It’s ‘deal or delay,’ one minister told The Times, while another said it looked unlikely that the Prime Minister could circumvent the law.

Senior government sources believe much will hang on whether Merkel ‘comes out fighting’ for a compromise deal. 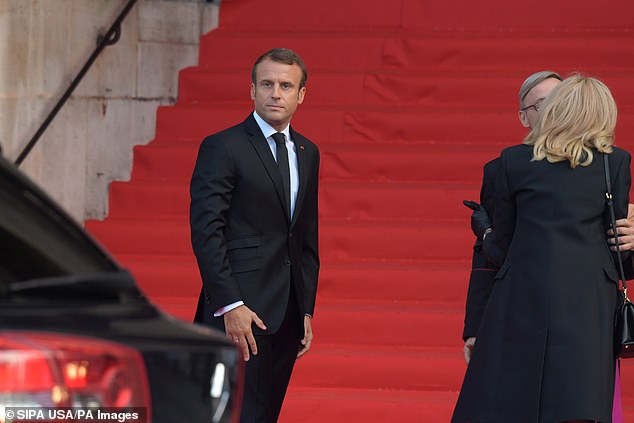 France, which expressed doubts over the last delay, was reportedly counselled by those behind the Benn act over its position (pictured: Emmanuel Macron at a service for Jacques Chirac in Paris on Sunday)

‘They are not budging yet,’ one source said.

Pressure is mounting ahead of a crunch EU summit on October 17, when Mr Johnson will make one final big play for a deal.

If some sort of package can be thrashed out it will then be rushed through Parliament before the premier’s ‘do or die’ deadline of October 31 – with both Houses likely to sit through the night.

Ministers say Labour MPs will be warned that it is their final chance to secure an orderly departure, with the alternative letting the country crash out at Halloween.

‘They will come around,’ one Cabinet minister told MailOnline. ‘If a deal comes back from Brussels it will be a stark choice.’

Mr Johnson is preparing a diplomatic blitz to coincide with the legal text, written by his chief sherpa David Frost.

No10 is not thought to have completely ruled out some kind of Irish backstop with a time limit on the Irish border backstop.

But Downing Street is adamant the final shape of the controversial arrangement cannot be the same as previously. 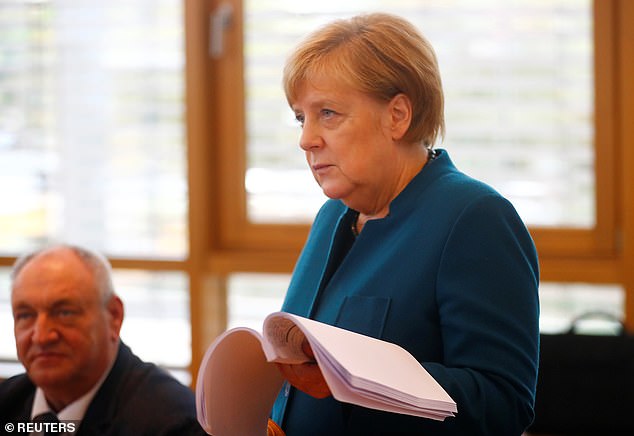 Senior government sources believe much will hang on whether Merkel ‘comes out fighting’ for a compromise deal (pictured: Merkel at a CDU board meeting on Sunday)

Sources insist the government will ‘obey the law of the Spartans’ – the group of Tory hardline MPs who killed off Theresa May’s package and have been fighting against any significant softening of the UK’s position.

If Brussels rejects the offer the pressure will grow on Mr Johnson to comply with the terms of an anti-No Deal law which states he must ask for a Brexit delay if no agreement is in place in the run up to October 31.

The Times said the Prime Minister is expected to hand over a ‘legal text’ proposing a way forward, including on how to replace the Irish border backstop.

The expectation is that formal talks between the two sides would then follow.

Sources suggested that if information was leaking from those talks by the end of the week it would be a bad omen for the chances of a deal being done.