Boston Dynamics, the robotics firm owned by Google parent firm Alphabet, has unveiled its latest ‘nightmare inducing’ robot, Handle – a wheeled humanoid that can carry heavy loads, do squats, and even leap over obstacles.

Leaked footage from the company’s first presentation of Handle reveals a robot that looks like the child of the Atlas bot and a Segway, with self-balancing capabilities to prevent falls as it zips around.

Despite its bizarre design, Handle moves with surprising agility, and is said to be far more efficient than its legged predecessors.

Boston Dynamics has unveiled its latest ‘nightmare inducing’ robot, Handle – a wheeled humanoid that can carry heavy loads, do squats, and even leap over obstacles. Leaked footage reveals a robot that looks like the child of the Atlas bot and a Segway

It combines legs and wheels, and ‘throws its weight around’ to balance itself at all times.

The robot can squat, stand, and even jump over obstacles.

In the footage, founder Marc Raibert jokingly describes Handle as ‘what I think will be a nightmare inducing robot.’

Handle stands atop two small wheels, with leg-like appendages that bend in knees that point backward.

Its upper body is equipped with two arms, and elbows that point in the opposite direction of its knees.

The robot can move between a squatted position low to the ground and a full stand – and despite its top heavy appearance, it doesn’t fall over.

‘This is an experiment in combining wheels with legs with a very dynamic system that is balancing itself all the time, and has a lot of knowledge of how to throw its weight around, which it uses to stabilize itself,’ Raibert said.

‘This is much more efficient than the legged robot.’

The video reveals Handle can even do tricks, showing off with a series of fast spins in both the squat and standing position, and even jumping over a construction barricade.

The robot moves fast, but its design means it’ll likely be limited to smooth terrain.

But, the video shows it can drive on grass. 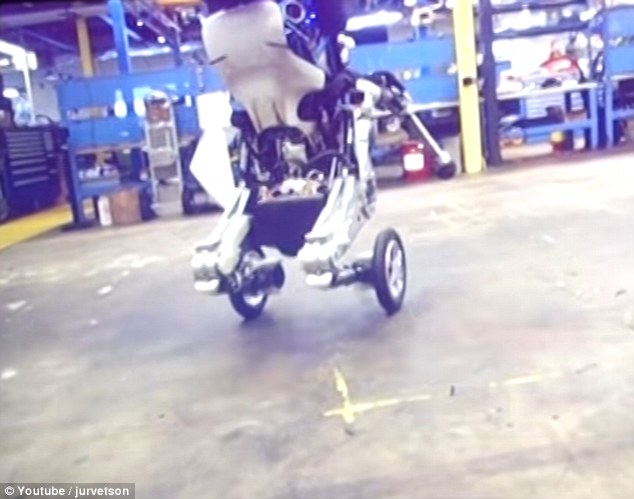 The presentation suggests Handle could be useful in a warehouse type of setting, with the ability to crouch low to pick up heavy objects and bring them elsewhere. ‘It can carry a reasonably heavy load on a small footprint,’ Raibert said

Atlas can now do a range of movements including:

– Standing up after falling over

– Balancing on a narrow beam

– Cleaning, including vacuuming and sweeping

Handle earns its name from its future job; eventually, the robot will be expected to handle objects.

The presentation suggests Handle could be useful in a warehouse type of setting, with the ability to crouch low to pick up heavy objects and bring them elsewhere.

‘It can carry a reasonably heavy load on a small footprint,’ Raibert said.

‘And its basically an exercise in seeing if we can do something like the humanoid that has less degrees of freedom and eventually could be less expensive,’ but with similar capabilities.

Boston Dynamics’ previous robots, including the dog-like Spot and SpotMini, and the humanoid Atlas, have relied on wheel-less legs to get around.

Alphabet’s Boston Dynamics has revealed a new mini version of its ‘Spot’ robot, with a strange extendable neck.

‘SpotMini is a new smaller version of the Spot robot, weighing 55 lbs dripping wet (65 lbs if you include its arm.)’ the secretive firm said.

‘SpotMini is all-electric (no hydraulics) and runs for about 90 minutes on a charge, depending on what it is doing.’

In the video, the robot is shown walking out of the firm’s HQ and into what appears to be a home.

Previous versions have used hydraulics, which are loud.