On April 15, 2013, two homemade bombs exploded near the marathon finish line in Boston, Massachusetts, firing shrapnel into the crowds that killed three and injured 260.

Following the attack hundreds of thousands of dollars were donated to research for technology that would help get the 17 amputees back on their feet.

The lessons learned by working with those survivors have been integral to developing better prosthetics for them and all other amputees.

Marc Fucarile, 39, is one of the 17 people who lost limbs in the 2013 Boston Marathon bombing. In the five years since the attack prosthetic technology has seen significant improvements 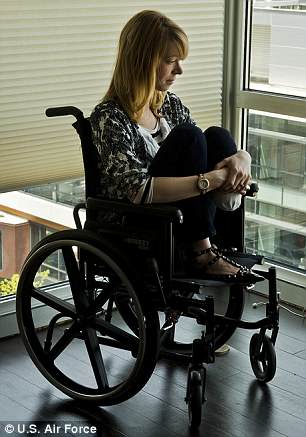 Many of the survivors, such as Adrienne Haslet-Davis, left, and Mery Daniel, right, are still adjusting to life after losing their limbs on the five-year anniversary of the bombing 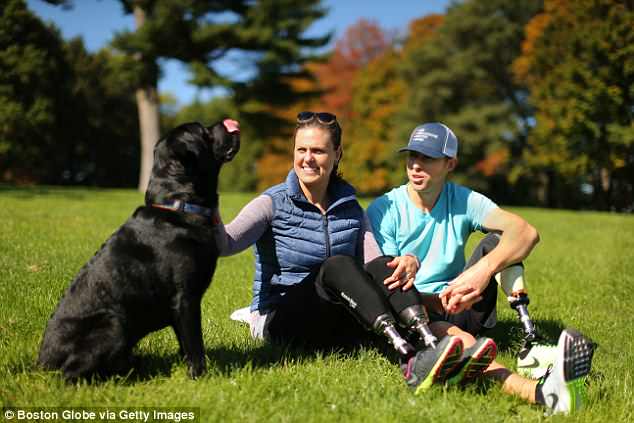 Survivors Jessica Kensky and Robert Downes, pictured in 2015, were newlyweds at the time of the bombing. Robert lost one of his legs and Jessica lost both of hers

Many of the amputees have shared their experiences following the deadly terror attack.

One of them is Steve Woolfendal, a father who realized his left leg had been blown off as he tried to get his three-year-old son Leo out of his stroller and away from the finish line.

There’s also JP and Paul Norden, brothers who were watching from the stands when the second bomb detonated, costing them both their right legs.

And Jeff Bauman, one of the key witnesses in identifying bombers Dzhokhar A. Tsarnaev and Tamerlan Tsarnaev, lost both of his legs in the blast.

Each of these survivors have undergone multiple surgeries and many of them continue to experience severe pain even five years later.

However, the doctors and researchers who helped them get back on their feet say the advances in prosthetic technology that resulted from working with the survivors is a silver lining of the bombing. 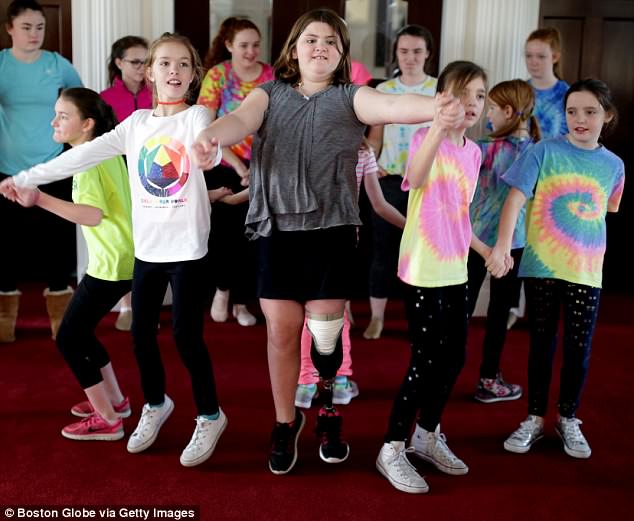 Jane Richard, who was six when she lost her left leg below the knee and her eight-year-old brother in the attack, can now participate in dance class like a regular 10-year-old 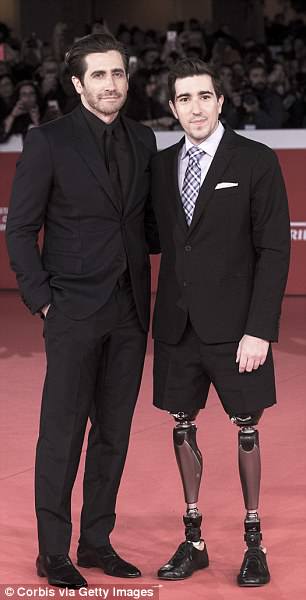 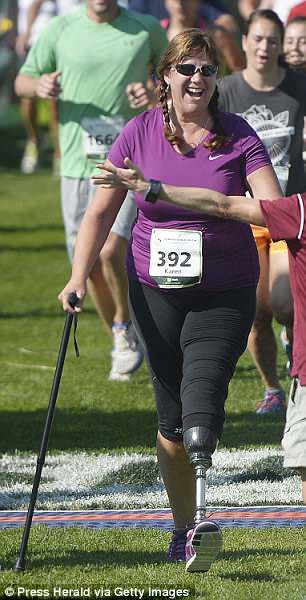 Jeff Bauman, who helped identify the bombers, is pictured left with Jake Gyllenhaal at the premiere of Patriots Day. Karen Rand McWatters is pictured right after running a 10K in 2015 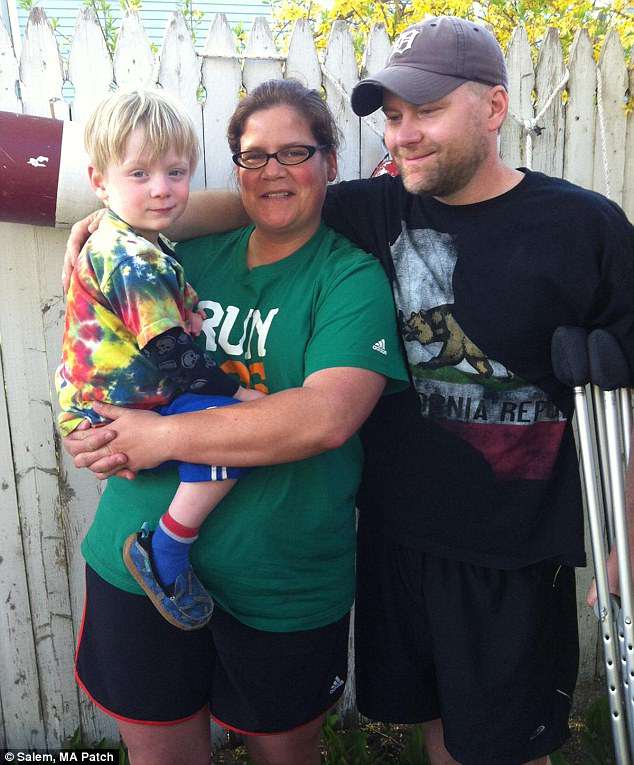 Steve Woolfenden, pictured with wife Amber and son Leo, realized that his leg had been blown off by the bomb as he tried to get three-year-old Leo away from the finish line

‘The collective experience in the aftermath of the Boston Marathon bombing was a very positive one in the medical community because there was a lot of crosstalk between military and civilian surgeons,’ Dr Benjamin Potter told AP.

Dr Potter is the chief of orthopedics at Walter Reed National Military Medical Center in Maryland, where three survivors were treated and doctors are attempting some of the cutting-edge procedures.

‘That exchange and that dialogue has been one of the silver linings to have come out of this, in that we’re hopefully better educated and better prepared for the next one.’

The booming field of prosthetic research

There are nearly 2 million people with amputations in the United States, many of whom rely on prosthetics  to perform everyday activities.

Artificial limbs have been around for centuries, but technology has seen drastic improvements particularly in the last decade.

Early prosthetics were intended to replace the limb aesthetically and create a sense of ‘wholeness’.

Modern artificial limbs have been designed to help amputees return to the lifestyle they were accustomed to before losing a limb.

With the help of nerve mapping and computer chips, today’s devices allow people to do things such as open water bottles and pick things up with the artificial fingers.

Researchers are now working to develop technology that would allow amputees to feel things through their artificial limbs.

By working with the Boston Marathon survivors, researchers have been able to develop technology that more effectively fits the average person, allowing the survivors to do more of the things they used to.

For example, Karen Rand McWatters, the woman who lost her left leg and watched her friend Krystle Campbell die at the finish line, is now able to participate in 10Ks.

Rebekah Gregory, a 29-year-old from Houston who lost her left leg, is able to rock climb.

Jane Richard, who was six when she lost her left leg below the knee and her eight-year-old brother in the attack, can now participate in dance class like a regular 10-year-old.

Jessica Kensky and Patrick Downes, newlyweds at the time of the attack that took one of his legs and both of hers, are able to take their dog to the park.

Marc Fucarile, a 39-year-old who lost his right leg after the attack and experiences constant pain from damage in his left, can take his bike out around Boston.

Marc has been fitted with a carbon fiber and titanium prosthetic commonly used by wounded veterans.

The prosthetic is controlled by a microprocessor that that automatically adjust the limb and allow for more natural movements.

Fucarile and the other survivors have received payouts from a compensation fund that have helped cover medical costs for the expensive devices that can range from $15,000 to $100,000. 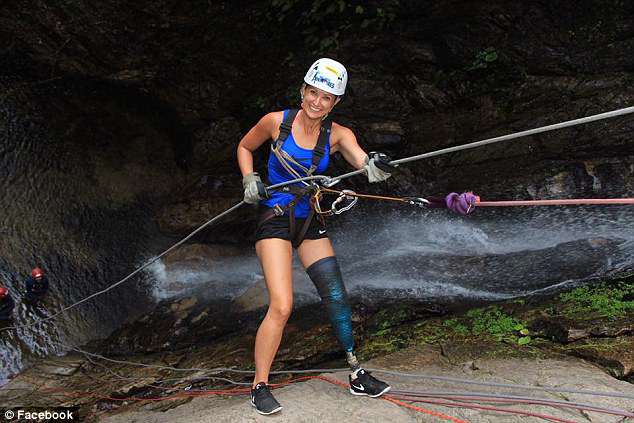 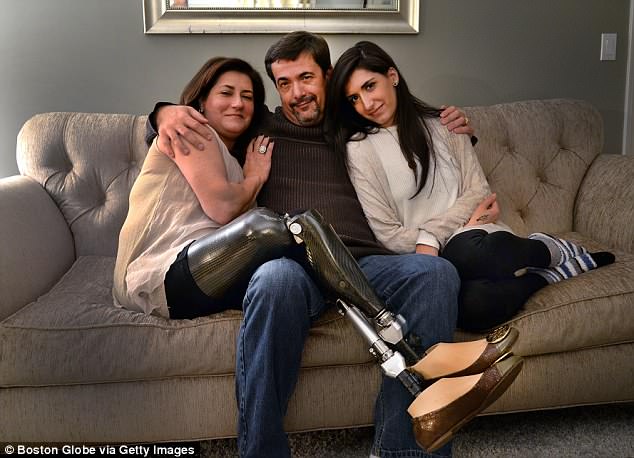 Celeste Corcoran, left, lost both of her legs in the bombings. She is pictured with husband Kevin and daughter Sydney who nearly bled to death from a piece of shrapnel

For other amputees, covering the cost of the devices is more complicated because insurance often isn’t enough.

Fucarile said fitting amputees with prosthetics is in an insurance company’s best interest.

‘If you’re an insurance company, look at the long-term effect and what you’re saving,’ he said. ‘If I didn’t have my prosthetic leg, I’d probably be overweight, have heart disease, be closer to diabetes and probably be more depressed.’

The prosthetics Fucarile and other survivors were fitted following the attack are expected to last five to seven years and will soon need to be replaced.

The best replacement option will depend on what they expect their next phase of life to look like, according to Paolo Bonato, a lead researcher for artificial limbs at Spaulding Rehabilitation Hospital in Boston where several of the victims were treated.

‘Sometimes the top-of-the-line Porsche isn’t always practical,’ Bonato told AP. ‘It might be more sensible to have a Honda.’

Since it was first performed in 2015, 50 such operations have been done in the US, including 16 at Walter Reed, Potter said. 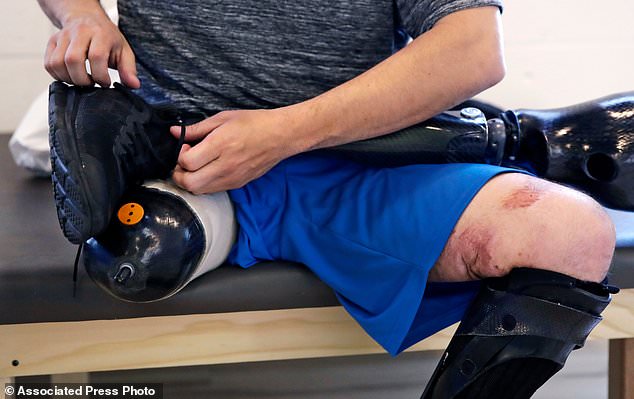 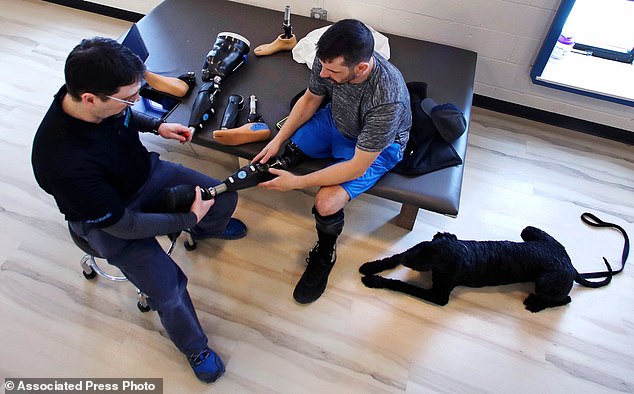 A team at Brigham & Women’s in Boston, where several survivors were treated, is also working on refine the amputation process as a way to improve the function of prosthetics.

‘One of the things the bombings crystallized for me was the need to improve amputations,’ Dr Matthew Carty, a surgeon at Brigham & Women’s Hospital, told AP.

‘We’ve made amazing advances in prosthetics technology – really by leaps and bounds – but the way we do amputations hasn’t kept up to speed with the capabilities that exist now.’

Dr Carty’s team hopes to combine improved amputation methods with more sophisticated prosthetics that amputees can control with their brains.

The project grew out of lessons learned by Boston doctors treating victims of the marathon attack and is funded by a foundation launched by the family of a bombing survivor who was treated at Brigham & Women’s.

‘We’ve made amazing advances in prosthetics technology – really by leaps and bounds – but the way we do amputations hasn’t kept up to speed with the capabilities that exist now,’ Dr Carty said. 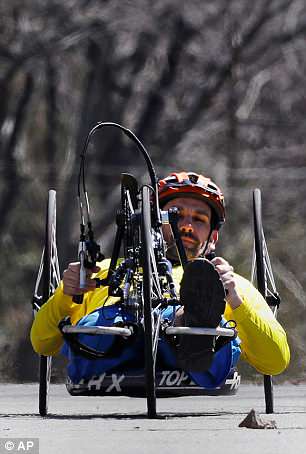 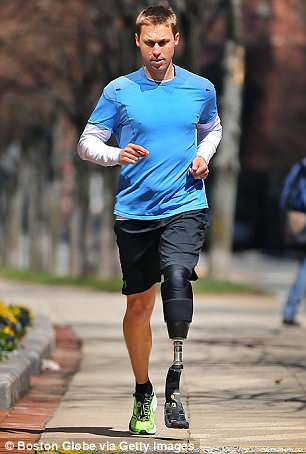 Marc rides his hand bike, left, and Robert goes for a jog in Cambridge, Massachusetts, right

The next step will be for researchers at the Massachusetts Institute of Technology to develop technology that can translate brain signals into movement of an artificial leg.

Researchers around the country are also developing technology that would allow amputees to perceive sensations through their prostheses.

‘We’re systematically redesigning the body along with synthetics in order to maximize communication between the body and the machine,’ said Hugh Herr, co-director of the Center for Extreme Bionics at MIT working with Brigham & Women’s.

Brigham & Women’s is also among the US hospitals seeking to do the nation’s first successful leg transplant. The surgical feat has been accomplished in only a few countries, including Spain and Canada. 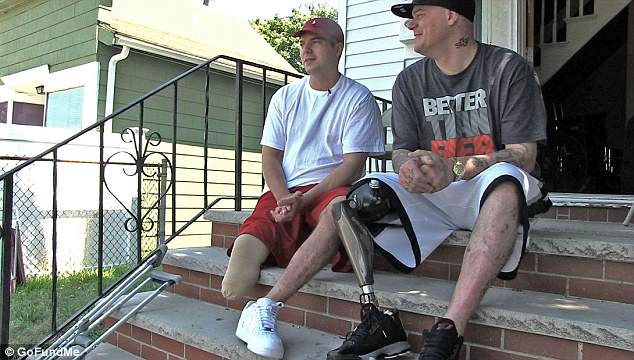 Brothers JP and Paul Norden, who were watching from the stands when the bombings occurred, both lost their right legs 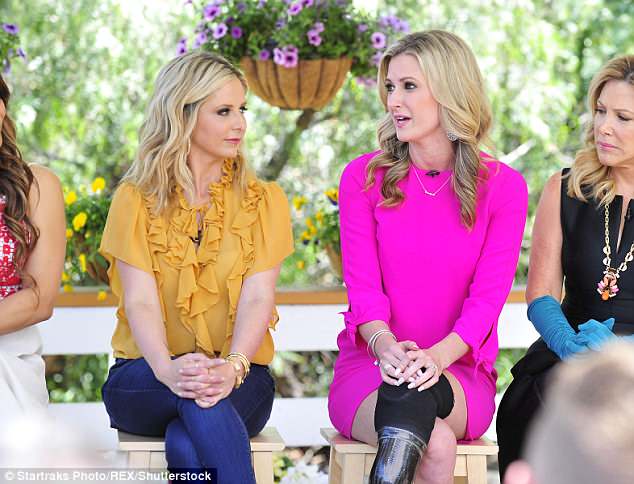