An owner returned home to find her bedroom wall had been destroyed by her dog who’s terrified of thunder.

Jan Templeton, 67, returned home after leaving the house for one hour to find her bedroom wall had been turned to rubble by her ten-year-old Boxer-cross, Hope.

Since being rescued by Jan seven years ago, Hope has been terrified of thunder and has to have a dog-sitter with her whenever there is a storm.

However on this occasion Jan left Hope unattended and returned home to her bedroom wall having been pulled to shreds.

But despite the £1,075 ($1,500) cost endured to repair the wall, Jan is more concerned in finding a way to help Hope cope with the weather.

Jan, from Blythe, Georgia, said: ‘I was so shocked when I walked into this – the wall was ripped down, but there was also blood on the electrical wires that she had chewed through. 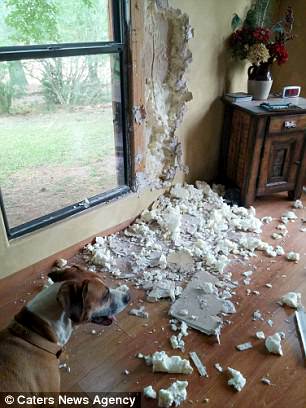 ‘I was just so thankful that she wasn’t electrocuted or the house didn’t catch on fire, I just kept telling myself it could’ve been worse.

‘Since I rescued her she has always been scared of thunder and has done damage to the doors and curtains in the past but never anything like this.

‘Whenever there’s thunder my husband and I adjust our schedules so we can look after her or we get a dog sitter, but this time I didn’t know a storm was due.

Jan has now reached out on social media to other Boxer-dog owners to get advice on how to cope with Hope’s fear.

She added: ‘Since I found her, afraid and starving living under and old church seven years ago, she’s been terrified of thunder.

‘There’s no telling what horrors she experienced before I found her, but now I focus on trying to provide her with a safe place for when it thunders. 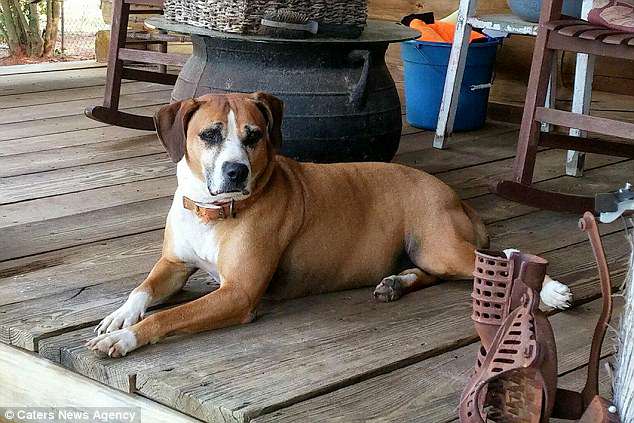 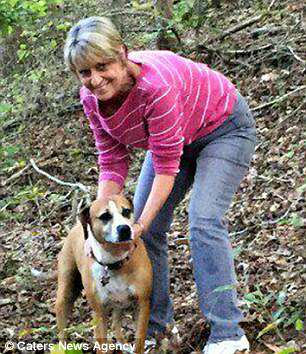 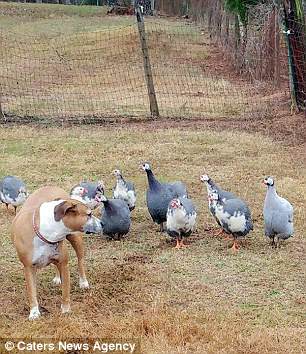 Jan found Hope afraid and starving living under and old church. Hope is now a ‘perfect watchdog’ and loves all the other animals on the farm 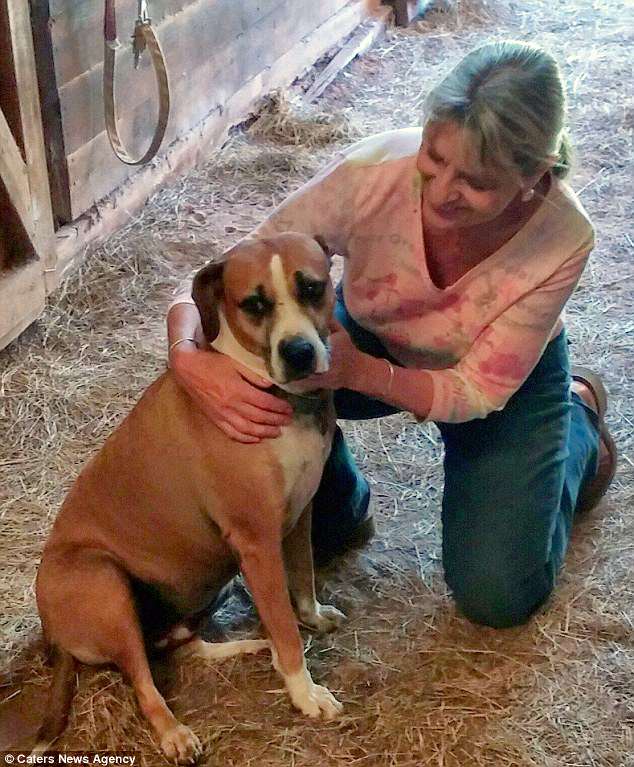 Despite her fear of thunder and ‘snoring like a freight train’, Jan says Hope is one the one of the best dogs she’s ever had

‘My husband created a “Hope House” which was a concrete stall with a dog house in but once when she was in there she tried so hard to climb out that she ripped out her toenails.

‘We have tried everything to calm her down when it’s thundering, so now I’ve reached out to fellow dog owners for advice!’

But despite her irrational reaction to thunder, Jan admits that Hope is one of the best dogs she has ever had.

Jan, a retired special education teacher, said: ‘Aside from the storm fear and that she snores like a freight train, she is great!

‘She is a perfect watchdog and loves all of the other animals on the farm we live on – she even feeds the horses, chickens, guineas and barn cats twice a day.

‘Although we have had to make adjustments for her, it is so worth it to own such a wonderful dog.’