Boxing fans have been left angry after Amir Khan knocked out Phil Lo Greco in less than 40 seconds.

After months of anticipation, Khan’s return to the ring at Liverpool’s Echo Arena on Satuday was over in just 39 seconds as he battered Lo Greco onto the ropes.

But many boxing fans were left feeling short-changed and said organisers should have found a better opponent to pit Khan against. 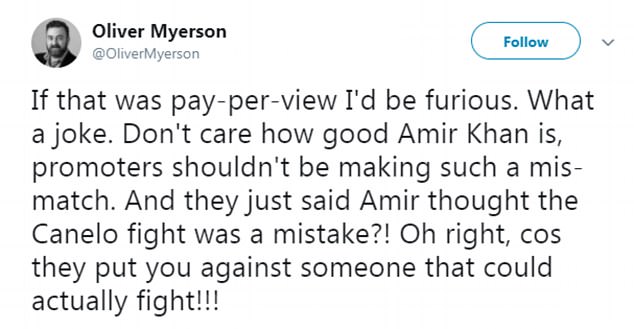 Oliver Myerson wrote on Twitter: ‘If that was pay-per-view I’d be furious. What a joke. Don’t care how good Amir Khan is, promoters shouldn’t be making such a mis-match.

‘And they just said Amir thought the Canelo fight was a mistake?! Oh right, cos they put you against someone that could actually fight!’

Another boxing fan added: ‘What a joke! Amir Khan beats a nobody in seconds. What is the point of that?’

Khan, 31, had not fought for two years, since being beaten by Saul ‘Canelo’ Alvarez in Las Vegas in May 2016, and he made up for lost time by knocking Canadian Lo Greco down twice in the early stages.

In his first bout on British soil in five years, he sent Lo Greco to the canvas with a swift one-two combination inside the opening 30 seconds.

It meant Khan delivered an emphatic statement to Kell Brook, who was watching on from ringside, ahead of a possible all-British grudge match between the two Matchroom stable mates.