Boy, 8, dies of a flesh-eating bacteria

Liam Flanagan, a second-grader who loved cycling and animals, crashed his bike as he rode down his family’s hill in Spring Creek, Oregon, on Saturday January 13.

The handlebar sliced through his jeans, and he was whisked to hospital for stitches.

But days later at home, Liam was in excruciating pain, and discovered a ‘purplish-red and gangrenous looking’ swell on his groin.

He was admitted to hospital on Wednesday, where he was diagnosed with necrotizing fasciitis, one of the most deadly bacteria which is fatal in 30 percent of cases.

Despite four major operations at three different hospitals, the infection was too aggressive, and on Sunday night he died.

Liam Flanagan fell and crashed on his bike mid-January. Days later, he was fighting for life 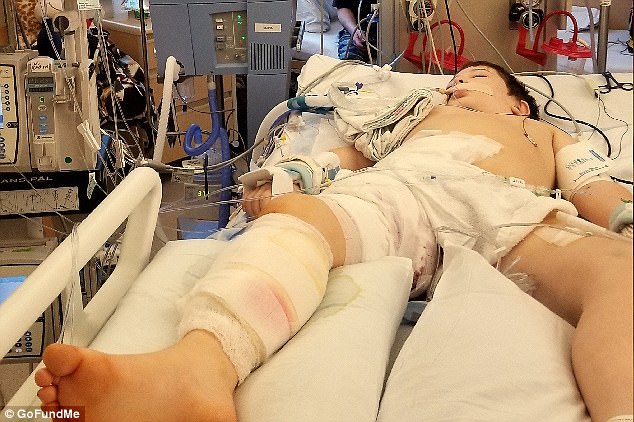 WHAT IS FLESH-EATING BACTERIA?

Once the bacteria enters the body, it can spread to the muscles, nerves, fat and blood cells around the infected site causing damage.

Death can occur if it is not stopped quickly enough.

Strong antibiotics are imperative to treating the disease and are typically administrated through an IV.

Surgery is recommended when the antibiotics are unable to reach the tissue that has already been infected.

This happens when the bacteria has prevented blood flow to those areas.

If any of the infection is left in the body after surgery, it can cause organ failure and the patient will die.

Distraught, his mother and stepfather Sara Hebard and Scott Hinkle are now speaking out about losing their son, urging other parents to be hyper-vigilant of cuts, dirt, and the healing process after stitches.

‘We don’t want any other parents to go through this,’ Scott said.

Describing the ordeal, Scott said he couldn’t believe his eyes when, days after Liam’s fall, he saw the inflamed growth on his groin.

‘It was purplish-red and gangrenous looking,’ he said. ‘We threw him in the rig and went like hell.’

Surgeons at his local St Anthony Hospital in Pendleton spent hours trying to cut out the infection from his tissues, eventually transferring him and his mother to Doernbecher Children’s Hospital in Portland early Thursday morning.

Scott stayed back to care for the other boys. In Portland, the surreal nightmare continued as surgeons tried to stay ahead of the rare but deadly infection, known as necrotizing fasciitis, by amputating parts of the boy’s body.

‘They basically cut him up piece by piece,’ Scott said.

With his condition worsening, he was transferred to another specialist unit at Randall Children’s Hospital, also in Portland, on Sunday.

Sara said she is still processing. Her emotions run the gamut. She smiles in wonderment as she recalls how he tried to keep his family and friends from worrying as he lay in his hospital bed in a nest of tubes, electrodes, cables and monitors. He FaceTimed with friends, laughing, joking and showing his tubes.

‘He told them ‘It’s just going to be a couple of days and I’ll be coming home,’ Sara said. ‘He was so strong and so brave.’

At one point, Liam was feeling dehydrated and Sara promised she wouldn’t eat or drink until he was able. Liam wouldn’t have it.

‘He took my hand and said he just needed a hug,’ she recalled.

Scott spoke to Liam for the last time by phone on Friday.

Now that Liam is gone, Sara and Scott are reeling in a rush of memories. 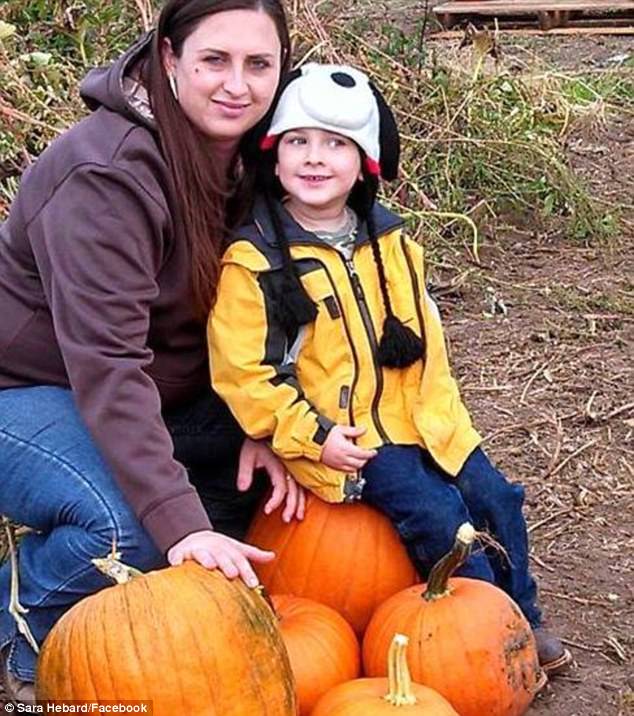 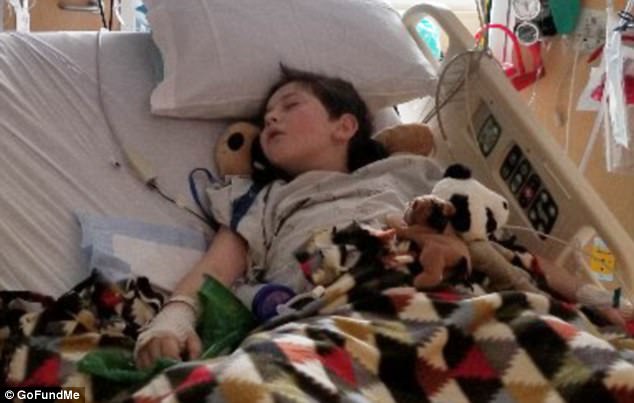 Tragic: Liam died on Sunday night after days of fighting and amputating his limbs

‘He was a bright ray of sunshine,’ Sara said. ‘He loved everyone and everyone loved him. He was one of those people who would walk into a room and would draw everyone.’

‘He was a lovable kid,’ Scott said of the boy who uncomplainingly helped him build fences and do other tasks around the farm. ‘He never had a bad word to say.’

Now, they are second-guessing themselves.

Maybe if they’d gotten Liam to the hospital sooner when he first complained of pain they had chalked up as normal. They want other parents to know about the flesh-eating bacteria, something they didn’t previously know about.

The community is raising funds to help the family with medical and funeral expenses.

A loaded baked potato feed is on tap during the next day’s games against Culver. A blanket toss, bake sale and basket raffle will take place both days. And they will pay tribute to Liam in camo, the pattern he loved so much.

‘Everyone is asked to come wearing camo in memory of Liam,’ said organizer Joan Harrison.