A young boy has launched a desperate appeal to find his lost mobile phone which contained photographs and videos of his mother who died from cancer.

Miguel Retamar, 11, said he is heartbroken after he lost his phone while on a trip to the bank with his grandmother in San Juan, western Argentina.

Miguel’s mother, Pabla, passed away aged 37 earlier this year. Pictured: The 11-year-old with his mother

The story has sparked widespread interest throughout Argentina and other Latin American countries, with pictures of Miguel and his mother being widely shared on social media.

His grandmother shared a post on Facebook to say they had taken a taxi to the bank on Monday but then realised he did not have the phone. By the time they realised, the taxi has left.

Miguel said: ‘I don’t have many photos or videos, and those remind me of my mother.’

Amanda Castro, Miguel’s grandmother, said he was ‘very sad’ and described the boy as ‘my cane, my support’.

She told Channel 8: ‘When my grandson realised he did not have the phone, he started to cry in such a way that I did too. He told me that he had lost everything from his mother.’ 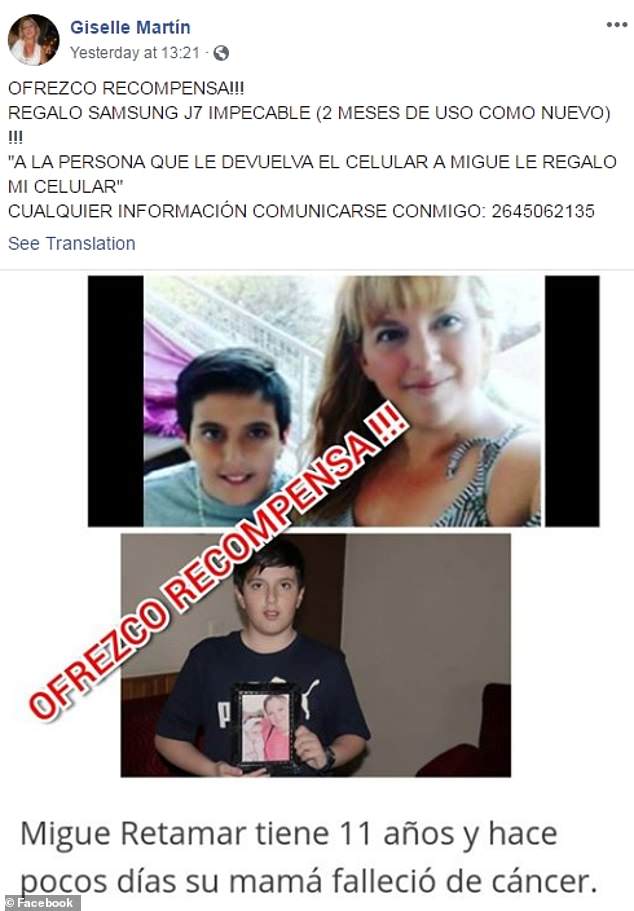 She added: ‘When Miguel was one year old, my daughter came to live in my house. We raised him together and since then we were inseparable,’ she said.

‘Five months ago she died, and the pain was so deep that I doubted my own faith.’

Miguel’s uncle, Hugo Retamar, told the Tiempo de San Juan website (in Spanish) that they called the taxi firm but they believe the phone had been taken by another passenger without the driver’s knowledge.

‘The value is not in the phone itself, but in the most precious memories for a child who has just lost his mother,’ he said.

The family is now hoping that the national appeal will encourage someone to return the phone.